So far the Alaska fire season has been fairly subdued although certainly not inactive.  According to today's report from the Interagency Coordination Center, the statewide fire acreage has now exceeded 300,000 acres, which is just over half the 1996-2016 median for the date.  The acreage is increasing by about 25,000 acres a day at the moment, but this is mild in comparison to what happened two years ago, when about 2 million acres burned in the first 10 days of July.  See here for a blog post from the time. 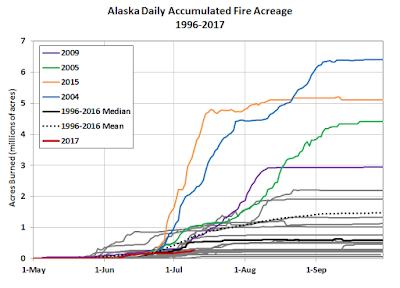 The only two large fires in the state are burning within the Arctic National Wildlife Refuge, with one of them having crossed over from Canada (see more details here).  Widespread rain has fallen in the central and southern interior recently, but the northeast of the state has been hot, dry, and windy; for example, the Fort Yukon SNOTEL site has reported high temperatures in the 70s and 80s for 3 weeks now, with only 0.3" of rain in that time.  Similarly, Old Crow in the northern Yukon Territory has seen highs above 80°F on 4 of the last 5 days including today.

Email ThisBlogThis!Share to TwitterShare to FacebookShare to Pinterest
Labels: Fire