Hi, Rick T. here with a short post on the (climatological) propects of warm weather the remainder of the summer. We're more than a month past summer solstice, and in the Interior, fireweed is blooming, blueberries are (finally) coming ripe and it's getting dimmer in the middle of the night. All signs that we're on the back side of summer. Summer is by no means over yet, but with each passing day, very warm temperatures becoming less likely, and we wonder,"is this the last time it will be this warm til next year?"

Of course, we can use history as a guide as at how likely a given temperature is to reoccur. Below is a temperature threshold exceedance plot for Fairbanks, constructed using the full Weather Bureau/NWS era daily data. That sounds complicated, but it really is pretty easy to use. Each colored line represents a threshold value. e.g. the blue line is for 80°F or higher.  The vertical axis represents the historical probably that a temperature equal to or higher than the threshold will occur later than the dates on the horiztonal axis. So for any given date, just go up the until you intersect the threshold of interest and read from the vertical axis the (historical) chances of exceeding that temperature later in the season. Harder to explain than to do.

By way of example, let's start on the left hand side of the plot. Say it's June 11th, and you want to know the chances it will reach or exceed 90°F the rest of the summer.  Just go up the June 11th vertical line (in this case, it's the first dashed grid line), and where it intercests the red line, read over to the vertical axis. This gives about a 24% chance that it would reach 90°F or higher. This is of course close to the climatological chance of a 90°F temperature for a summer.   An example from the middle of the chart: today (July 23) the temperature at the Fairbanks Airport reached the 80°F threshold value. What are the chances it will get at least that warm again before the snow flies? Well, just going up the July 23 verticial, we see that there is, climatologically, about a 70% chance of a temperature 80°F  or higher occurring before the end of summer. However, when I consult the handy-dandy NWS forecast, I see that there are no temperatures anywhere close to 80°F forecast for the next week. So if that works out, by the last days of July, the chances that a temperature 80°F or higher will occur later than that drops to ~55%. 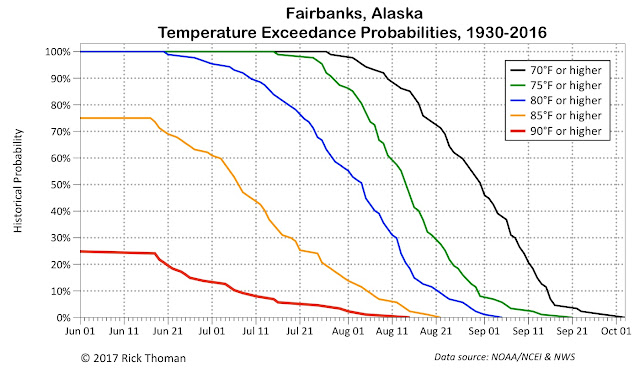 Now, of course there are limitations to this approach, esepcially in regards to extremes. For example, since the temperature has been 80°F or higher as late September 4th, there is no reason to think that there is zero chance of a temperature ≥  80°F on September 5th. Also, this approach assumes that the threshold occurances are independent, which is not likely to be true, and this has the highest impact on the analysis of of rare events (e.g. any 90°F temperature, or any 80°F temperature after late August). Overall, this approach is best suited to getting a fix on the high-probability to low-probability transitions, which we are now approaching.