Yesterday evening the "official" breakup was recorded at 7:16pm (April 23rd) on the Yukon River at Dawson in the Yukon Territory.  Although the ice again had a very difficult time filling in the channel next to Dawson City this winter, in the end it held on just long enough to avoid setting a new record for early breakup; the record from 2016 stands at 11:15am on the same date.  (However, 2016 was a leap year, so arguably April 23rd was a day later that year.)

Here's a photo of the river this morning, taken from high above on the west side, courtesy of yukonriverbreakup.com.  (Click to enlarge.)

Most readers probably already know that breakup was easily the earliest of record on the Kuskokwim River at Bethel (April 12) and the Tanana River at Nenana (April 14).  The previous record was April 20 in both places.  In view of the extreme warmth that occurred in March, it's really no surprise that new records were set.

Readers may also recall that back in March I ventured to make some forward-looking statements about the likely early breakup at Nenana, so it's worth going back to see how that played out.  The figure below is an update of the one I showed earlier, and it depicts several different elements: 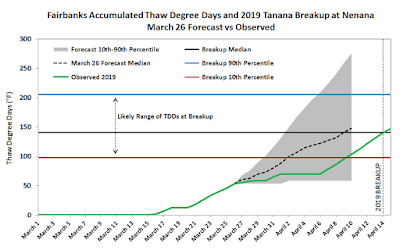 It turns out that the forecast from March 26 was considerably too warm, and thawing almost ceased for about 10 days after my post.  This possibility fell inside the range of uncertainty for the forecast, but it wasn't the most likely outcome, and so it pushed back the date of breakup compared to what I thought was most likely.

However, another aspect of the forecast worked out remarkably well: breakup eventually occurred on the day when Fairbanks TDDs reached 141, which coincidentally is exactly equal to the long-term median (i.e. the green line reached the black line on the very date of breakup).  This was lucky; we obviously don't expect to hit the median of a sampling distribution very often.  Nevertheless, it does provide some evidence that the general approach to predicting breakup is valid.

In the next post I'll describe some additional work I've done to extend the TDD/breakup modeling, leading to some interesting results about the sensitivity of breakup dates to long-term changes in average temperature (climate change).