In light of the extraordinary recent persistence of (far) above-normal temperatures in Alaska, it's interesting to look at historical data to see how "persistence" typically varies in space and time in Alaska's climate.  For example, we tend to think of highly maritime climates as having more persistent temperature regimes, because the state of the ocean surface exerts a strong influence in these locations; so if a warm ocean anomaly becomes established, then air temperatures in the vicinity tend to remain elevated for some time afterwards.  Similarly, if sea ice abundance differs substantially from normal, then air temperatures nearby tend to follow.

A few years ago I looked at a customized index to measure persistence on one side or the other of normal (see here), but here I'm simply using the lagged correlation (autocorrelation) coefficient to describe the degree of persistence in daily temperature departures from normal.  I performed the calculation for a 7-day lag using 1981-2018 daily temperature anomalies relative to the 1981-2010 daily normals, and I used 31-day calculation windows centered on each day of the year in order to capture the seasonal variation.  Smoothing over the course of the year was done with two harmonics.

The seasonal variation in this measure of persistence is quite similar for large parts of the state extending from Anchorage to the interior, west, and north of Alaska, with a peak in early spring and a second, higher, peak in autumn, while persistence is relatively weak in high summer and mid-winter.  Click to enlarge the charts below. 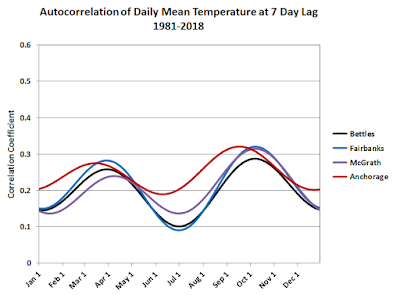 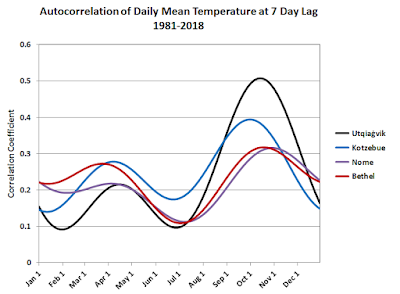 It seems likely that the peaks in spring and autumn are related to year-to-year variations or long-term trends in snow and ice cover, which can have a positive feedback effect on temperatures in the transition seasons.  For example, if spring meltout occurs early (like this year), then subsequent temperatures will be higher than they would be otherwise.  This is certainly what is going on in Utqiaġvik (Barrow), where the presence or absence of sea ice in autumn creates persistent temperature anomalies of one sign or another, and in this case the results may be as much a symptom of the long-term decline in sea ice than of year-to-year variability.

Temperature persistence behaves quite differently in sites that are dominated by the Bering Sea or the Gulf of Alaska - see below.  St Paul Island has a prominent peak in temperature autocorrelation in summer, which I think reflects the canonical maritime influence, but Kodiak and Juneau have surprisingly low autocorrelation for much of the year, and I'm not sure how to explain that. 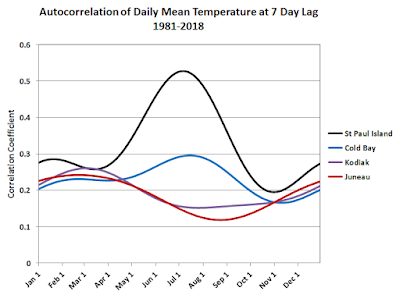 Finally, temperature persistence in the southeastern interior (Northway and Gulkana) shows a double peak, similar to locations farther west and north, but here the autumn peak is much less prominent; the behavior looks something like a blend of the Gulf of Alaska climate with the northern climate. 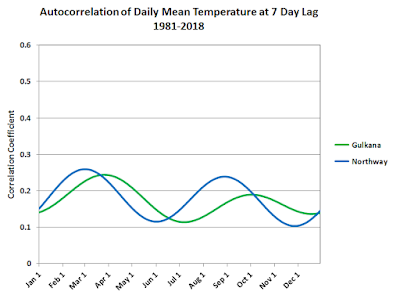 Beyond the intriguing regional variations, I think it's interesting to note that the only time of year with at least modest autocorrelation at all of the sites is right around now: late March or early April.  It seems clear that early spring is a climatologically favored time for unusual temperature regimes to become persistent in Alaska, and recent weeks have provided a remarkably amplified instance of this.