Following on from the last post, I'd like to discuss briefly some results that came out of an attempt to simulate the distribution of breakup dates for the Tanana River at Nenana.  The annual Nenana guessing game is of course a venerable Alaskan tradition, and the resulting historical record of breakup is an invaluable piece of climate data extending back to a time when modern weather measurements were sparse and sometimes rudimentary.  Here's a chart of the long-term Nenana history, courtesy of Rick Thoman; click to enlarge. 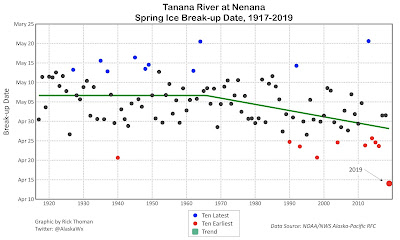 It goes without saying that the trend towards earlier breakup dates is consistent with the long-term warming trend, but it's interesting to consider whether we can say anything about how consistent the breakup trend is with the measured temperature trend.  Has breakup advanced more or less than we would expect based on observed temperatures?

In previous posts I've expressed the view that breakup dates can be modeled quite well using the accumulation of thaw degree days (TDDs), i.e. the excess of daily mean temperatures above 32°F; the ice typically goes out within a fairly well-defined range of  TDD values.  Of course there are other factors at play, including ice thickness, the amount of sunshine, and occasionally heavy precipitation that brings forward the breakup date, but there's no doubt that air temperature is the key variable that drives breakup timing in most years.

Assuming then that we need to model breakup in terms of TDDs, we have to deal with the complication that TDDs are not linearly related to mean temperature (unless the daily mean temperature always stays on one side of freezing).  As a consequence, there's no simple way to translate a long-term temperature change of X°F into Y TDDs and thereby derive the change in breakup date using the observed TDD-breakup relationship.  Finding the change in TDDs requires a more careful approach that deals adequately with the temperature-TDD relationship.

A related challenge is that the variance of temperature is an essential component of the TDD accumulation, and so temperature variance and even skewness must be accounted for in the model.  If the daily mean temperature just followed the long-term normal each day, with no other variance, then TDDs would accumulate much more slowly than they actually do, because it's the above-normal days that provide most of the TDDs in the early and middle part of the meltout process each year.  Only later in the thaw can merely normal temperatures do any real damage to the ice.

In light of these considerations, I set up a simulation of daily mean temperatures in Nenana using an ARIMA model based on the statistical characteristics of observed April temperatures from 1999 to 2018.  I decided to use Nenana data rather than Fairbanks because the 1999-2018 relationship between TDDs and breakup is better for Nenana than for Fairbanks (not really a surprise!).  In creating the synthetic temperature data, I accounted for both the changing variance of temperatures through the melt season (i.e. decreasing variance as spring advances) and also the fairly substantial skewness of the temperature distribution (i.e. a heavier tail on the cold side of normal).

Here are some examples of synthetic temperatures for the first half of the year, with the black line being the 1981-2010 normal.  There is a slight tendency towards above-normal temperatures, because that is what has been observed in April (and most other months) in the last 20 years.  I won't claim that the synthetic series are perfectly realistic, but the final results suggest they are adequate for the purpose of the breakup model. 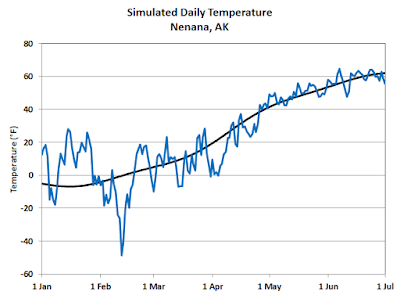 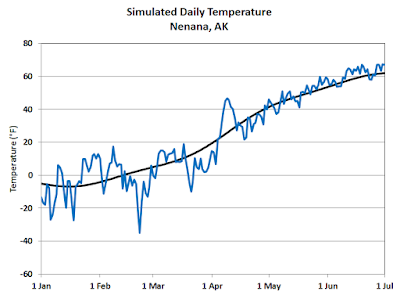 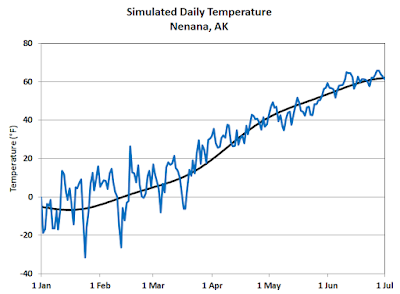 For each simulation it is straightforward to add up the TDDs and estimate the probability of breakup on each date by referring to the observed joint distribution of TDDs and breakup dates.  For example, the median (1999-2018) TDD value in Nenana on breakup day is 116, so for each simulation we can say that the cumulative probability of breakup reaches 50% when TDDs reach 116.  If we do this not just for the median but for each empirical quantile, then we obtain a cumulative distribution for each simulation; and if we repeat the process many times, we get a smooth result - see below. 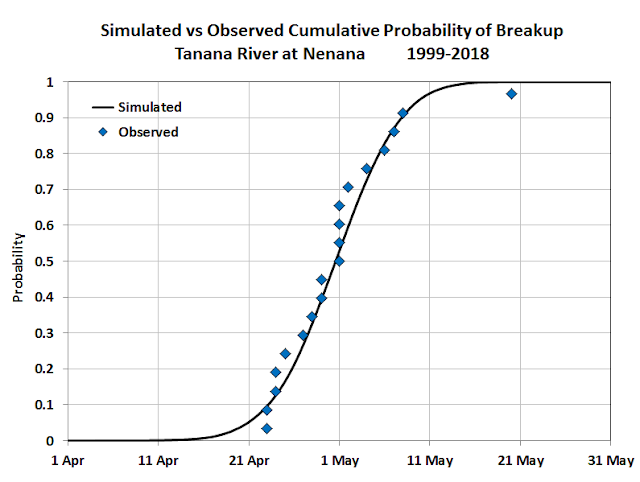 The empirical cumulative probability curve is shown with the blue markers; note that several of the breakup dates have occurred more than once, with 1 May occurring 4 times since 1999.

The agreement between the observed and simulated curves is quite good; for example, the median of the simulated curve falls between April 30 and May 1, which is spot on according to the 1999-2018 history.  It's important to note that this good agreement is not guaranteed to occur, because the simulated temperatures may or may not produce realistic rates and timing of TDD accumulations.  To cite an extreme example of a poor simulation, if we assume perfectly normal temperatures every day, the cumulative probability of breakup is much too late and also too narrow - see below.  As I noted above, purely normal temperatures would produce far too few TDDs in the typical date window for breakup. 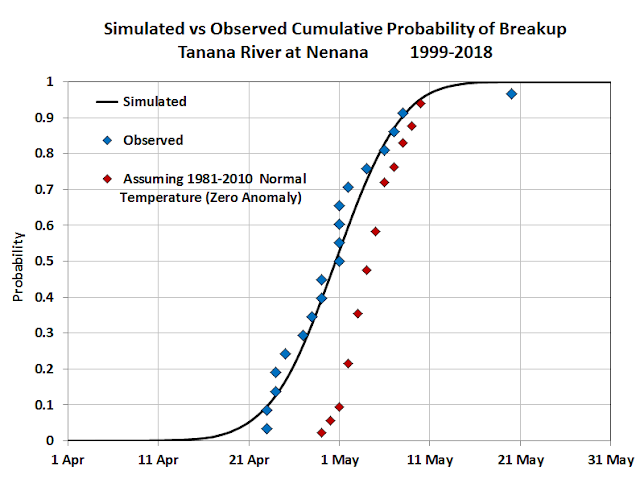 As an aside, it's interesting to observe how extreme the 2013 outlier was.  According to the simulated distribution - based on the 1999-2018 temperature distribution - there is less than a 0.01% chance of breakup being as late as May 20; this implies it was a one in ten-thousand year event for the modern climate, although I'd be very skeptical of my model's ability to estimate probabilities this far out in the tail.

The final step (for now) in the investigation is to shift the mean temperature up or down to examine how the breakup distribution changes.  Using 5000 simulations at each 1°F increment from 10°F of cooling to 10°F of warming, we arrive at the following result. 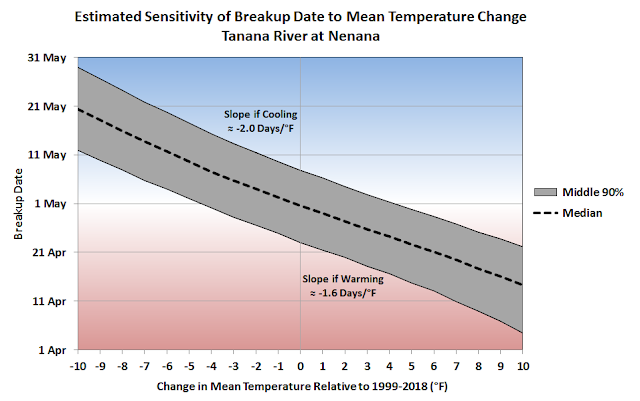 It's interesting to see that the sensitivity of breakup date is slightly greater for temperatures below the recent climate, and slightly less for higher temperatures.  This is a consequence of the changing variance through the season, and the fact that I've assumed no change in variance relative to the recent climate.  Under this (probably false) assumption, as the climate warms and breakup moves into a higher-variance portion of the year, it takes more warming to produce the same increase in TDDs (because of the increasing variance).  Alternatively, in a colder climate, with breakup in a lower variance part of the spring, there is a larger response of TDDs to mean temperatures, and breakup dates respond a bit more quickly.

Finally, to address the question I posed at the beginning - what about the observed change in breakup dates?  Well, the helpful trend lines on Rick's chart show that breakup has advanced about 6-7 days since before 1970, and based on the cool side of the chart above, this would correspond to about 3-3.5°F of temperature change.  And this is about right; the mean temperature change in Fairbanks between 1930-1970 and 1999-2018 was +3.2°F in April.  Using this approach, we can say that the long-term breakup history at Nenana strongly supports the long-term historical temperature data from the area, and I find this very encouraging from a climate science perspective.

If we assume then that the modeling results are reliable, how much warming would be needed before an April 14 breakup (as this year) would be typical?  April 14 falls right at the upper edge of my results; about 10°F of climate warming would be required.  Of course, this ignores the many other factors that could influence breakup with such a dramatic degree of climate change, such as the response of ice thickness to massive winter warming.