A couple of weeks ago I mentioned that the earliest recorded date for spring's permanent meltout of snow cover in Fairbanks was in 2016, when semi-continuous snow cover was seen for the last time on April 8th.  With this year's meltout on April 4th, the record was in jeopardy - but a slightly unusual early spring snowfall has changed the scene once again.

Of course there is usually still snow remaining on the ground at this date in Fairbanks, and last year the depth was measured at 17" on April 18th.  And it's not unusual to get a little bit of snow this late in the season; but the 2.2" that fell yesterday is somewhat unusual; this is only the 18th time with this much snow in Fairbanks after the middle of April (1930-present).  In 2002, 13" of snow fell in the second half of April, and 14" fell in 1992 between May 8 and May 17.

Here's the view from the UAF webcam yesterday morning at about 8:30am. 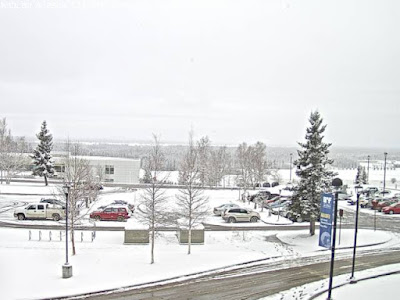 The balloon sounding from Fairbanks airport reported a temperature of -8.3°C at 850mb yesterday afternoon, and while this is not particularly unusual, it is striking to note that fully two-thirds of the winter (November-March) was warmer than this.  So in this respect we might say that the air mass bringing snow to Fairbanks this week is more wintry than most of the winter that just ended.  The November-March average 850mb temperature this winter was a mere -6.6°C, the warmest on record (2nd and 3rd place go to 2014-15 and 2015-16).

Here's what the 500mb analysis looked like yesterday afternoon, courtesy of Environment Canada; the healthy low pressure system over western Alaska is responsible for the chilly conditions.  (Click to enlarge.) 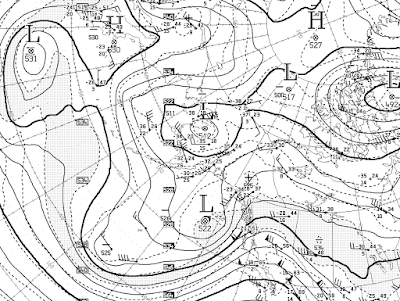 And here's a sequence of surface observation maps showing the cold air working its way down from the northwest between Monday afternoon and Wednesday afternoon.  The cold is really nothing to write home about at all, but it does feel refreshing to see something more like normal on the map.

Finally, as everyone knows, breakup has already occurred at Nenana and Bethel, and it was the earliest on record for both locations (more on that later).  This morning, however, the Kuskokwim at Bethel was glazed over again with a dusting of fresh snow; this seems like a pretty unusual event (freeze-over after spring breakup), but others might know if it's been seen before. 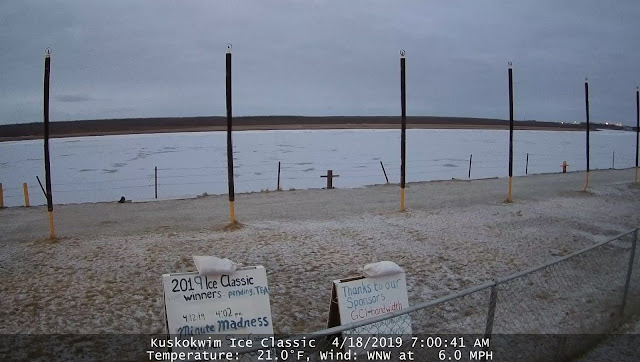