An update on Arctic sea ice conditions has been long overdue on this blog, although Rick Thoman has been providing excellent updates all summer via his Twitter feed.  Nevertheless it's worth reiterating the main headlines, which are that Chukchi Sea ice is at record low levels for the time of year, and Arctic-wide sea ice stands a chance of breaking the record low from 2012.

Unsurprisingly, the extraordinary shortfall of ice in the Bering Sea last winter set the stage for extremely early meltout farther north, and Chukchi Sea ice extent has been almost continuously at record lows ever since meltout began in early May. 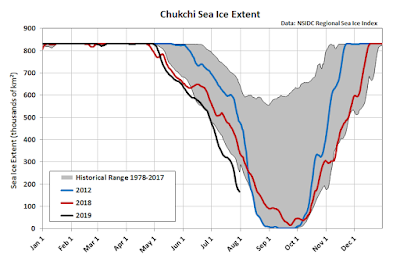 The figures below show the NWS sea ice analyses from today (top) and last year on this date (below).  It's quite a difference in both the Chukchi and Beaufort Seas, although the Beaufort Sea ice deficit is not at record levels. 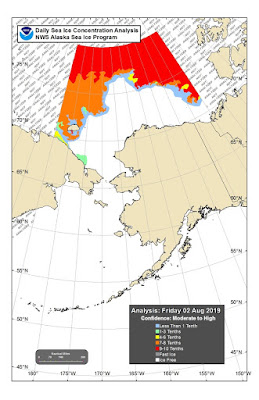 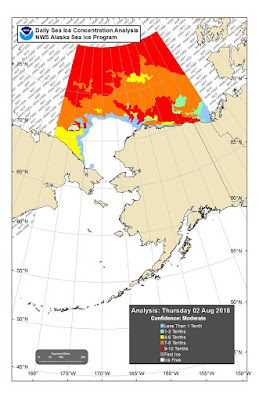 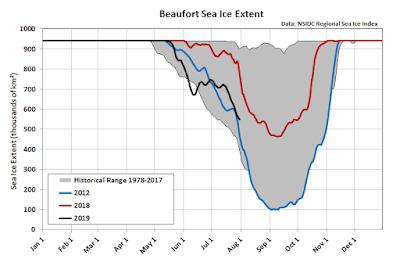 For the Arctic Ocean as a whole, sea ice is running just about neck-and-neck with 2012, which saw the lowest seasonal minimum on record.  However, a new record low this year isn't necessarily likely, because the rate of meltout was so great in August 2012 that it may be tough to keep pace this year.  Much will depend on the weather pattern in the next several weeks, including the degree of storminess and the amount of warm air that is imported into the Arctic from southerly latitudes.  In 2012 an intense low pressure system in early August probably contributed to the rapid ice loss by breaking up ice and mixing it with warm water.  The forecast for the next week or two looks more suggestive of high pressure in the Arctic, but on the other hand there's no lack of warmth in waters south of the ice edge, so I think a challenge to the 2012 record must be a real possibility.  We'll know soon enough. 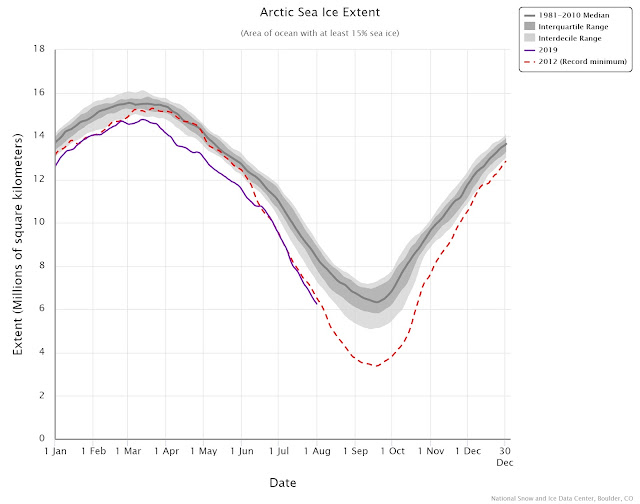