Parts of interior and western Alaska have seen a lot of rain in recent days, which is of course good news as far as wildfires are concerned: there has been minimal growth in fire acreage this month so far.  But the copious rainfall has brought other problems to some locations, including flooding and (at least in Denali NP) mud and rock slides.

Here are maps of daily estimated precipitation since the beginning of the month:

Rain was especially remarkable across the Seward Peninsula and the northwest interior in the first few days of the month, with Nome reporting its highest 24-hour rain total of record (2.47").  Rain amounts from some other sites were even more remarkable; see below for a graphic published by the NWS on the evening of August 3rd. 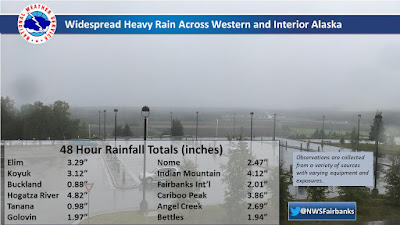 This time of year does of course tend to be relatively wet in interior and western Alaska, but there's a very pronounced west-east gradient in when the wettest conditions tend to occur.  Consider the contrast in timing of peak rainfall frequency between Nome, Fairbanks, and Northway - see the charts below.  Far up the Tanana River valley in Northway, measurable rainfall is most frequent at the beginning of July, and August actually sees much less rain than July on average, so the rainy season, such as there is, ends quickly there as summer wanes.

In Fairbanks the peak in precipitation frequency is about 4 weeks later than in Northway, according to 1981-2010 normals from NOAA, and August tends to bring considerably more hours of rain, and more cloud, than July.  (However, the total August rainfall is a bit less than in July, because there are fewer heavy rain events.  For more discussion of July versus August, see posts here and here.)

In contrast, if we go all the way over to Nome, August is much wetter than July and clearly stands out as the wettest month of the year. 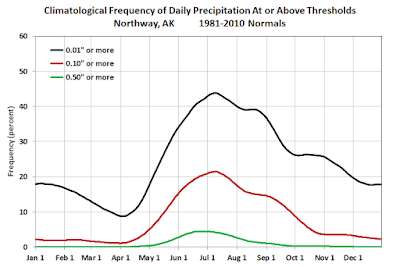 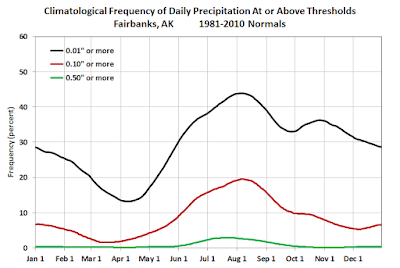 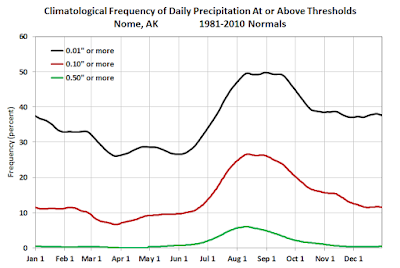 The map below gives a sense of how the date of peak precipitation frequency varies across the entire state.  It generally advances from early July to early August from east to west across the interior, reaches late August or early September along the west and southwest coast, and then most of the south-central region sees the height of its rainy season in late September (when interior weather is usually much improved).  Of course the epic rainy season of southeastern Alaska doesn't reach its peak until October. 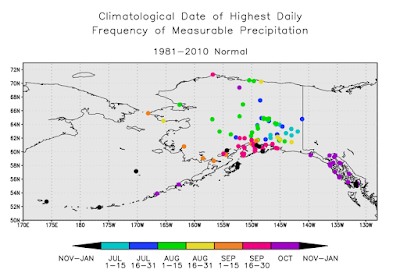 Here's a zoomed-in map to reveal a bit more of the local variation in the southeast interior and south-central. 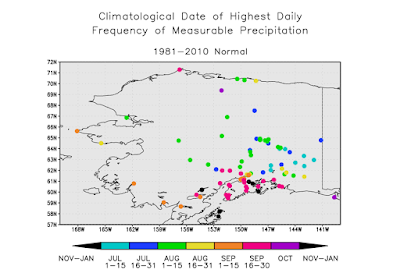 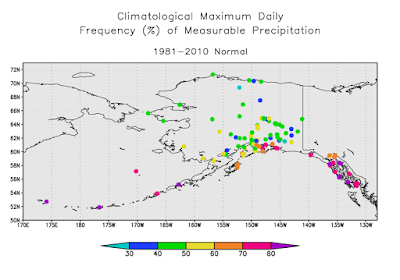 Posted by Richard James at 6:41 PM