Before I get to the main subject of this post, I would be remiss not to mention a publication released by UAF's International Arctic Research Center last week, titled "Alaska's Changing Environment".  The document compiles a wide range of observations from diverse sectors of Alaska's physical and biological environment, with an emphasis on illustrating the changes that have occurred in recent years and decades.  It's a really nice summary of the many ways that change has been observed across the state, and the graphical content is splendid.  Here's just one example, showing the sudden onset of drought in southeast Alaska in the last year or so, which is particularly dramatic when viewed in contrast to the wet regime that preceded it. 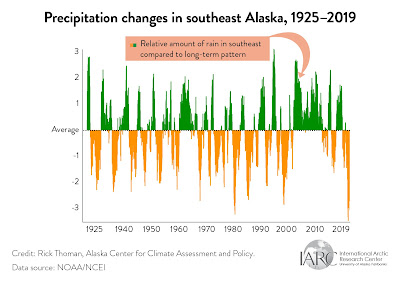 Here's the link to the report, whose principal author is Rick Thoman:

And now on to the topic of sea ice.  In my last update from a month ago, Arctic-wide sea ice extent was running very close to the record low of 2012, but in the past few weeks the rate of decline has slowed and the two curves have diverged; and so it now appears very unlikely that a new record low will be set this year. 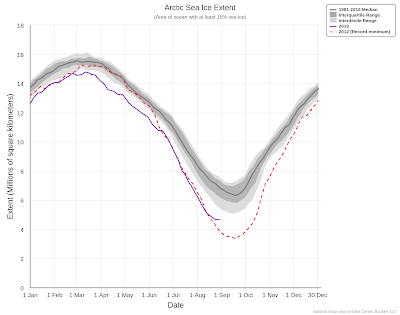 A possible cause of the slowdown in ice meltout may be the unusual northerly component to the wind over the Arctic waters north of Alaska and eastern Siberia.  In the past two weeks the ridge of high pressure that has been affecting southern Alaska extended up from the Bering Sea to the East Siberian Sea, and a contrasting zone of low pressure has prevailed near the western edge of Canada's Arctic Archipelago.  Consequently there has been a strong northwesterly flow across the sea ice edge near or just south of 80°N (see the graphics below), and I surmise that this has greatly reduced ice melting and retreat on this side of the Arctic Ocean.  (It is more common for winds to be westerly or southwesterly at this time of year between 75 and 80°N, although of course there's a lot of year-to-year variabiltiy.) 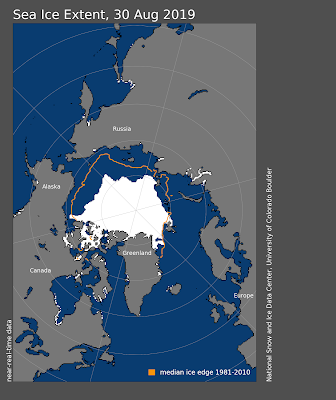 Here are the latest ice extent charts for the Beaufort and Chukchi Seas.  Even though the ice meltout has slowed lately, there is still considerably less ice than last year, and only a few years in the satellite era have had less ice at this date.  Given the very late meltout in the Chukchi Sea last year, it's still entirely possible that significant ice loss still lies ahead in the next few weeks. 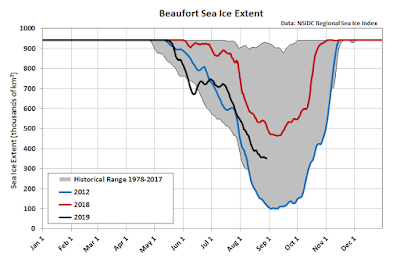 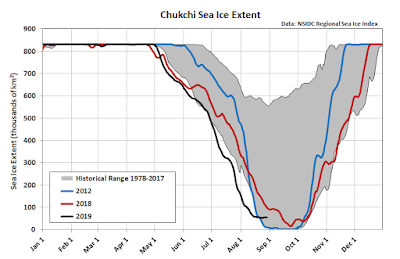 The chart below shows the annual minimum extent for both of these basins as a percent of total area; this year will probably come in around 35% for the Beaufort and 5% or less for the Chukchi.  The Chukchi Sea essentially melted out completely (less than 1% ice) every year from 2007-2012, except 2009.  We should bear in mind, though, that ice "extent" includes any sea area with at least 15% ice coverage, so the actual area fraction covered with ice could be close to zero whenever the basin-wide extent drops below 5% or so.  Sea ice area is tracked separately, but extent is the preferred metric at NSIDC for reasons that are explained here: 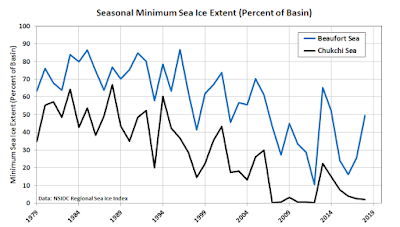