Last weekend, as I was writing about the stark rainfall contrast across Alaska, the effects of the drought in the south-central region were unfortunately illustrated by an outbreak of several rare late summer wildfires, leading to evacuations and significant property damage.  And "drought" it most definitely is: Anchorage has still seen no measurable rain this month and remains on track for the driest summer of record.

Even the national Drought Monitor, a subjective drought assessment issued every week by experts in the field, shows widespread drought, both in south-central Alaska and in the southeast of the state.  In the vicinity of Anchorage the drought is classified as "extreme", the second highest category, and remarkably the analysis estimates that there are twice as many people in "extreme drought" in Alaska as in the rest of the USA put together.  Here's the Drought Monitor website link and the latest analysis for Alaska: 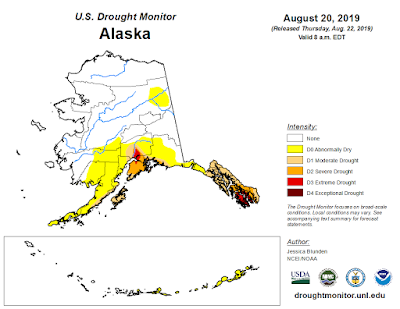 An article in the Anchorage Daily News this week discussed the broader context for the unusual late wildfire activity near Anchorage: check out the article for excellent commentary from Rick Thoman.

In light of the discussion in the article, I thought it would be interesting to look at the historical variations in the latitude of Alaska wildfire; for example, do the historical data show a notable southward shift in fire locations?  Somewhat remarkably, fire acreage and location data is available from the Alaska Fire Service/AICC all the way back to 1939; I have no idea how reliable the numbers are from the earlier decades, but the analysis produces some interesting results.

First, the total annual fire acreage from this source shows the 80-year history of overall fire activity in Alaska.  As many others have noted, the frequency of big fire years has increased since about 1990, although there have always been highly active years every now and then. 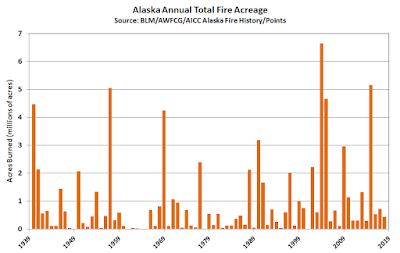 Here's a histogram comparison of fire acreage in latitude categories for three different periods in the history.  In this chart we're looking at the fraction of total acreage in each period, so the columns add up to 1.0 for each period (i.e. the columns do not correspond to absolute acreage numbers).  Note that the AFS data provides the location at which each fire started, not (for example) the centroid of the acreage burned. 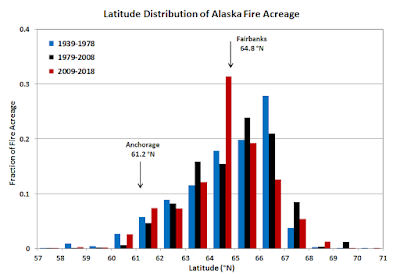 The overall pattern of latitude dependence has of course remained quite similar over the years, but it is intriguing to see that the peak latitude band changed from 66-67°N in the first 40 years, to 65-66°N in 1979-2008, and then to 64-65°N in the past 10 years.  This does suggest a southward shift, although it's not easy to judge by eye whether the median of the distribution has changed; more on that later.

The next chart shows absolute acreage totals (average per year) for each period, and here the increase in the 64-65°N band stands out more distinctly because of the upward trend in total acreage. 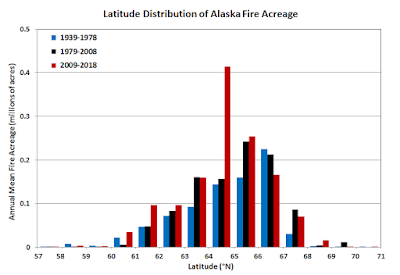 To gain another perspective, I calculated the acreage-weighted mean latitude of fire activity (for all fires of 10 acres or greater) in overlapping 15-year periods; see below.  Here the result is interesting and quite different, because it seems that Alaska wildfire acreage occurred relatively far south - indeed farther south than in recent years - prior to about 1970.  But beginning with the big fire year of 1969, more northern acreage tended to be burned, and that trend continued until 1997, when the trend switched back; in that year, the 2 million acres of fire were focused around 63°N, which is the farthest south of any 1+ million acre fire year. 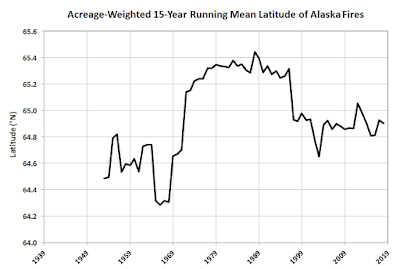 Finally, here's a scatter plot of acreage versus acreage-weighted latitude by year, with different colors highlighting the two halves of the 80-year history.  Recent decades have seen some fairly big years focused south of 64°N (1997, 2002, 2013), but if the data are to be believed, 1940 and 1957 were very active fire years with a southern focus (around 64°N).  Surprisingly, the overall acreage-weighted mean latitude is actually higher for the last 40 years than the preceding 40 years. 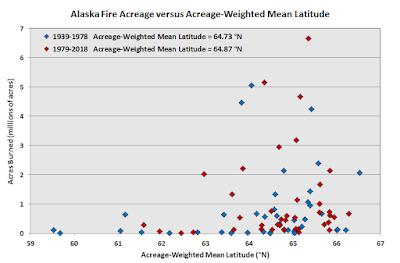 In conclusion, the historical trends in Alaska wildfire latitude are not simple to interpret, and the older history clearly suggests that the baseline of recent years may not be atypical on a longer time scale.  However, a couple of caveats are in order: first, my acreage-weighted analysis is obviously dominated by a relatively small number of big fire years, so the trends may not be statistically robust.  And second, it seems wise to remain cautious about the quality of the data from the early decades; for example, if acreage was systematically underestimated in the northern interior (where perhaps aerial monitoring was less intensive in the early days), then the early fire acreage reports would be biased towards the south.  Perhaps someone among the readership can chime in on the history of fire monitoring in Alaska.