Reader Gary posted a comment about possible ocean impacts of excess water runoff from this summer's heavy rainfall over western Alaska, and while I don't have any insight on that question, it got me thinking about effects on permafrost.  Back in March I commented on a National Park Service study showing that permafrost warming has been extreme in northwestern Alaska, and it seems likely that excessive rainfall can only worsen the situation.  Here's a different study, also published this year, that reaches the striking conclusion that "precipitation is as important an environmental control on permafrost degradation as surface air temperature":
Changes in precipitation and air temperature contribute comparably to permafrost degradation in a warmer climate 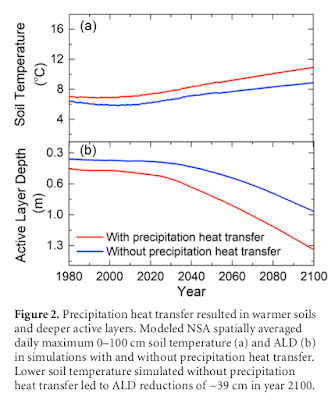 I'll be the first to admit I don't know much about permafrost physics, but a back-of-the-envelope estimate seems to confirm the significance of the issue.  For example, if 10 inches of rain falls at an air temperature of 10°C, and all the water percolates into the subsurface, this makes available about 10 MJ of energy per square meter for warming or thawing near-freezing soils (based on the heat capacity of rain water: 250 kg x 10°C x 4200 J/kg/°C).
If we're talking about simply melting ice, this amount of heat could melt 30 kg of ice per square meter, which is only about 3cm depth of pure ice.  However, if the heat goes only into warming the soil, then 1°C of warming could occur through as much as 5m or more of the ground - based on the heat capacity and density of "icy peat" that I found here.  I'll refrain from any further guesswork, but it seems the effect could be significant.
Here's a paper - apparently under review - that argues the same thing:
https://www.researchsquare.com/article/rs-512675/v1
On the other hand, another study focused on Tibet finds the opposite, with enhanced rainfall being associated with a decrease in heat conduction (presumably because rainy weather is also cooler and cloudier).  Looks like there is scope for further research.
https://www.sciencedirect.com/science/article/abs/pii/S0048969721040420
Posted by Richard James at 11:50 AM