Ten days ago I was writing about the hottest weather of the summer for interior and western Alaska, but a dramatic reversal has suddenly produced unseasonably chilly conditions instead.  Widespread significant rain occurred again from the west coast to the White Mountains, and the scene has turned wintry in the Brooks Range: Atigun Pass is now reporting about 6" of snow on the ground. 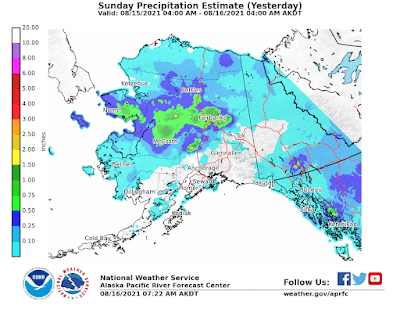 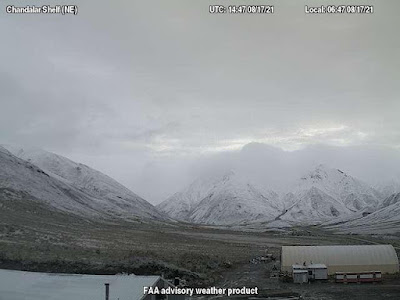 With cloud and rain holding daytime temperatures down, Fairbanks has seen the chilliest couple of days for this early in the season since August 2002. 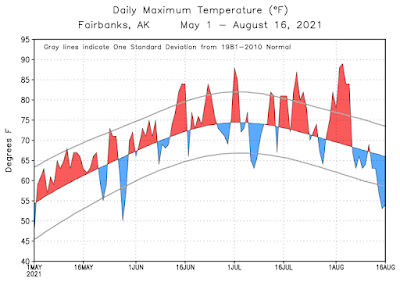 Interestingly the late summer of 2002 evolved quite similarly, with some distinctly warm weather in the second half of July and the beginning of August, followed by below-normal temperatures.  Both years had a significant rain in Fairbanks around August 7-9, then heavy rain around the 16th. 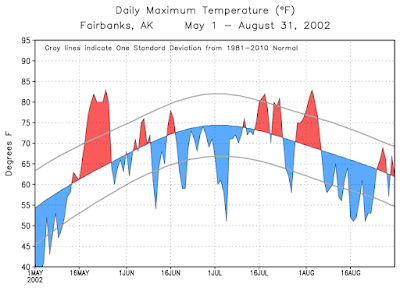 With more than an inch of rain in Fairbanks since Sunday morning (and nearly continuous too), the summer's rainfall total is now above 5.5" and above the long-term normal, for the 8th consecutive year.  I wrote about this remarkable trend in a few posts last year, for example:

For a broader look at why August tends to be wet, see the 2018 post below.  The short answer is that the rapid loss of solar heating over the Arctic is already causing substantial strengthening of the jet stream, leading to more vigorous large-scale weather disturbances, and there's still a lot of moisture available in the atmosphere to produce copious rain across much of the high latitudes.