A couple of weeks ago I mentioned a paper that was published in January, looking at changes in air and ground temperature in recent years at monitoring sites within Alaska's national parks.  Here's the link:

The focus of the study is on the dramatic warm-up that occurred in 2013, with the monitoring data showing ground temperature increases of up to 4°C at 50cm depth.  The climate warming was concentrated in winter and was much more pronounced in western than eastern Alaska.  Here's a chart of annual mean air temperature at Nome to illustrate the change. 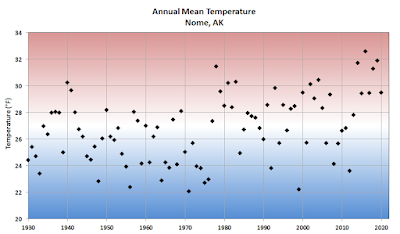 Among the interesting results in the study is that the measurements show much more subsurface warming in the Arctic parks than the interior parks, because the monitoring sites up north are in tundra locations with thin, wind-scoured snowpack; in this setting the ground temperature can change as much as the air temperature.  In contrast, the sites in the Denali, Wrangell-St. Elias, and Yukon-Charley areas have deeper snowpack in mostly alpine and taiga environments, and the insulating effect of the snow reduces the amplitude of the warming below ground.

The implication of the warming for permafrost is, of course, very significant, and the paper demonstrates this quantitatively by comparing the ground temperature rise to the fraction of park area with estimated (modeled) permafrost temperatures above certain thresholds.  For instance, 40% of the Bering Land Bridge National Preserve was estimated to have permafrost temperature above -3°C in 2000-2009, and so the warming of 3°C or more is likely to have brought much of this area into a thaw.  And although ground warming has been much less in the more southerly parks, these have significant areas with marginal permafrost that is already close to a thaw.

The park with the most robust permafrost situation - at least based on modeled permafrost temperatures - is the Noatak National Preserve, with only 6% of land area above -3°C prior to the warm-up.

I applaud the authors (including Pam Sousanes and Ken Hill of Howard Pass fame) for their work.  The value of this NPS monitoring network and careful analysis of the data can hardly be overstated in light of the rapid change of recent years.