A Short But Intense Growing Season

With the 0.6" of snow that fell in Fairbanks on Wednesday, we can calculate the length of the snow-free period since the last Spring snow. 123 snow-free days occurred between the May 17th snow and the September 18th snow. During those 123 days, over 1,300 growing degree days (GDD) accumulated in Fairbanks. A GDD is tabulated for every degree that the daily average temperature is above 50°F. For example, a day with a daily average temperature of 55°F records 5 GDD for that day.

The 2013 value is the second most on record for the snow-free period. Only 2004 had more GDDs. What is remarkable is that the accumulated GDDs occurred during one of the shortest snow-free periods on record. Looking at it on a per snow-free day, 2013 was far and away the largest value for any year on record. 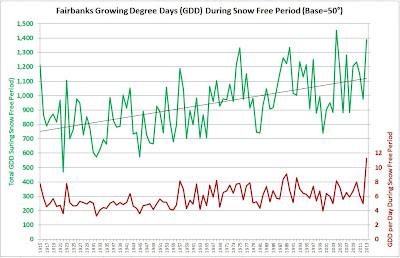