Back in May we had extensive discussion about the unusually cold spring conditions, which broke some longstanding records in Fairbanks - including the latest date with daily mean temperature below freezing (May 18).  With the early arrival of freezing conditions this month, it should be no surprise that the length of the continuous summer thaw season was the shortest on record in Fairbanks (despite the summer being much warmer than normal).  The most recent similar year was 1992 - again, no surprise, though it is interesting to note that 1992 was cold both in spring and in September, similar to this year.

See below for the data in graphical form; I've defined the thaw season as the period when daily mean temperatures are continuously above freezing.

In Bettles the continuous thaw season ended with the record freeze of August 31.  Remarkably, the season was bounded on both ends by hard frost (10 °F on May 19, 15 °F on August 31).  The 103 days of continuous thaw matched the outcome in 1983. 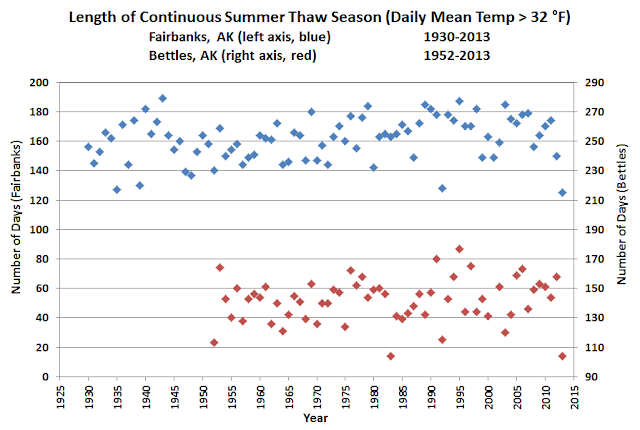