Much of mainland Alaska is having the coolest sustained weather in September since 2004, with occasional bouts of (mostly) light snow from the Alaska Range northward as well as higher elevations in South Central. In context, an interesting aspect of this chilly weather is shown by Sunday morning's 500mb analysis:

I've highlighted the 546dm contour, which nicely defines what we might call a polar vortex". Notice that vortex is displayed completely away from the Pole, with a massive 566dm high centered at 85N north of Scandinavia.

The anomalies show up dramaticly in the this plot from the Penn State e-wall: 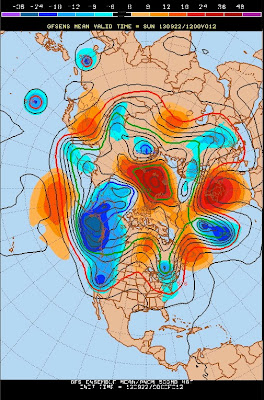 There are three centers with more than 240 meter anomalies: the near-pole high, the high centered over the United Kingdom and  the broad low heights stretching from the Chukchi Se southeastward across Alaska and into the Northwest CONUS and a very deep center in the Gulf of Alaska.