The second half of April 2014 in Fairbanks will end as one of the warmest on record, although the full month will be only a little above normal because of the cold spell earlier in the month.  Unusual warmth in spring is very consistent with the trend in the past decade or so in Fairbanks, at least compared to decades prior to the strong 1987 El Niño.  For example, the April-May mean temperature in Fairbanks has been above the 1951-1980 average in 22 of 27 years since 1987; and ten straight years from 2003 to 2012 were warmer than that older normal.  Last year was of course a dramatic exception to the rule.

The charts below show a comparison between long-term mean temperatures by month, by season, and for the annual means; the green columns show the differences between the 1981-2010 mean and the 1951-1980 mean, while the blue columns show the difference between 2004-2013 and the 1951-1980 mean.  Looking at Fairbanks first, the most recent 10 years were warmer than the 1951-1980 mean in all four seasons, with the largest warming in spring (April-May).  The winter season warmed the most in the 1981-2010 period, but the negative PDO phase has brought cooling more recently in winter.  Curiously, Novembers have been cold of late, but Decembers have been very warm. 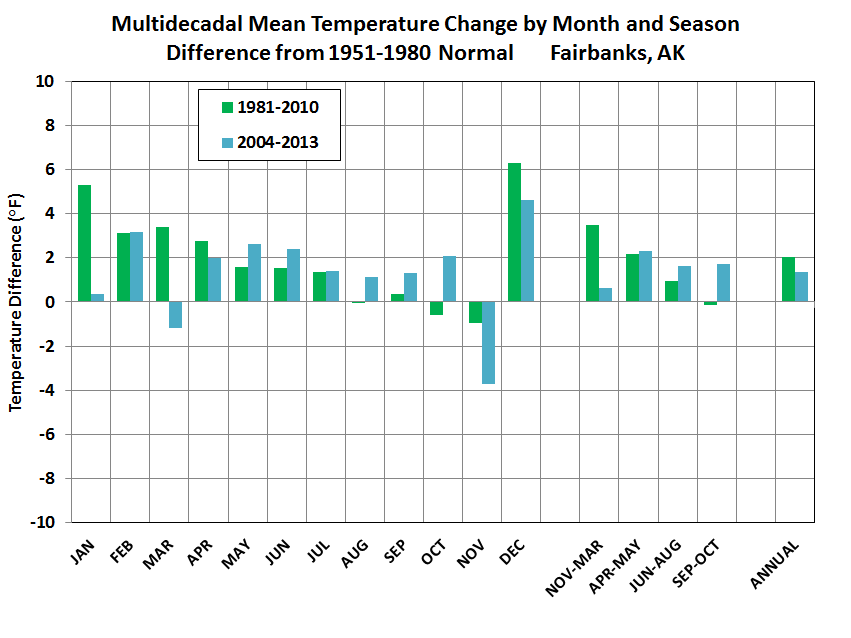 The situation at Barrow is remarkable, of course, with every month and season except March being warmest for the 2004-2013 period.  The recent warming has been most dramatic in October and November. 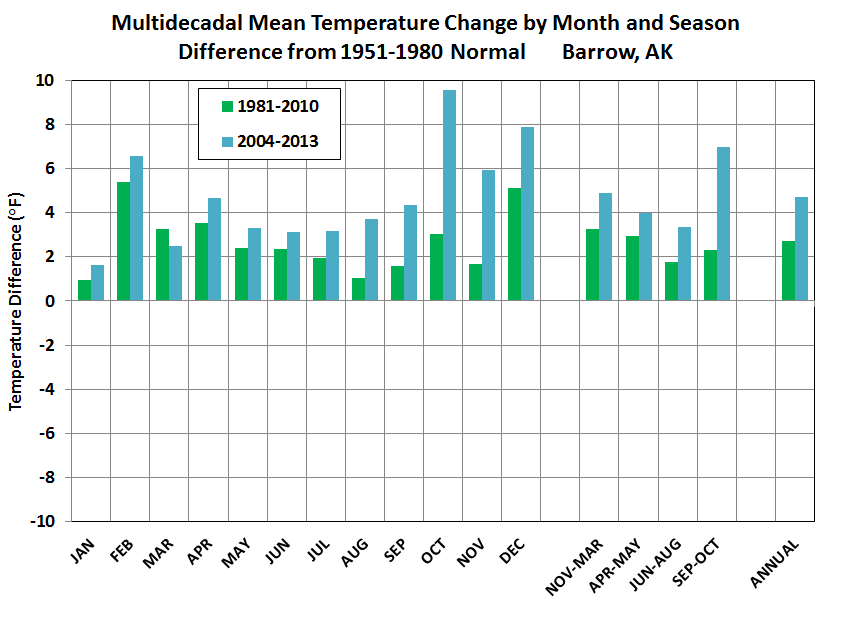 Charts for Anchorage, Nome, and Cold Bay are included below.  I added Cold Bay because of the extraordinary warmth there in the past several months, as highlighted by Brian yesterday.  Each of these locations has seen slight cooling in winter and spring (and for the annual mean) in the most recent 10 years compared to 1981-2010, but each location has warmed in autumn. 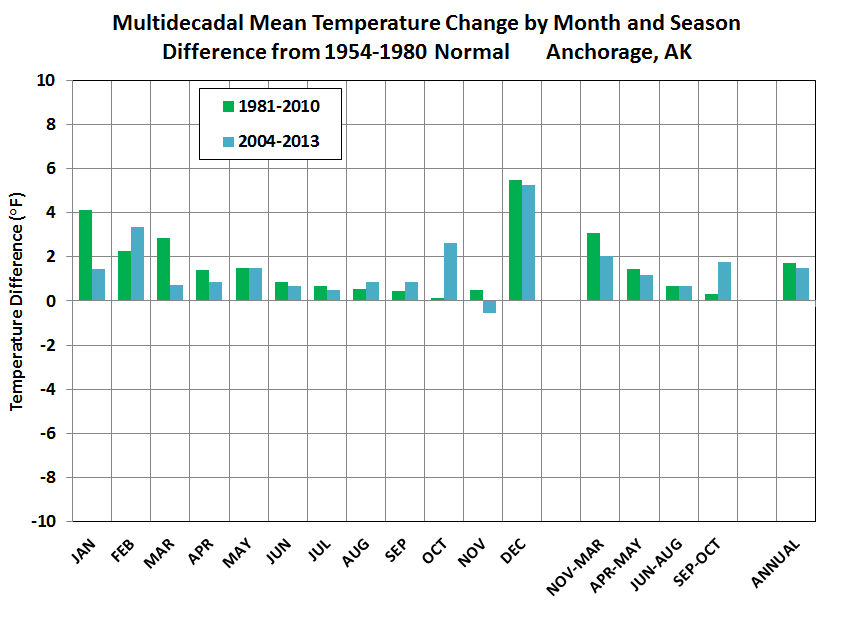 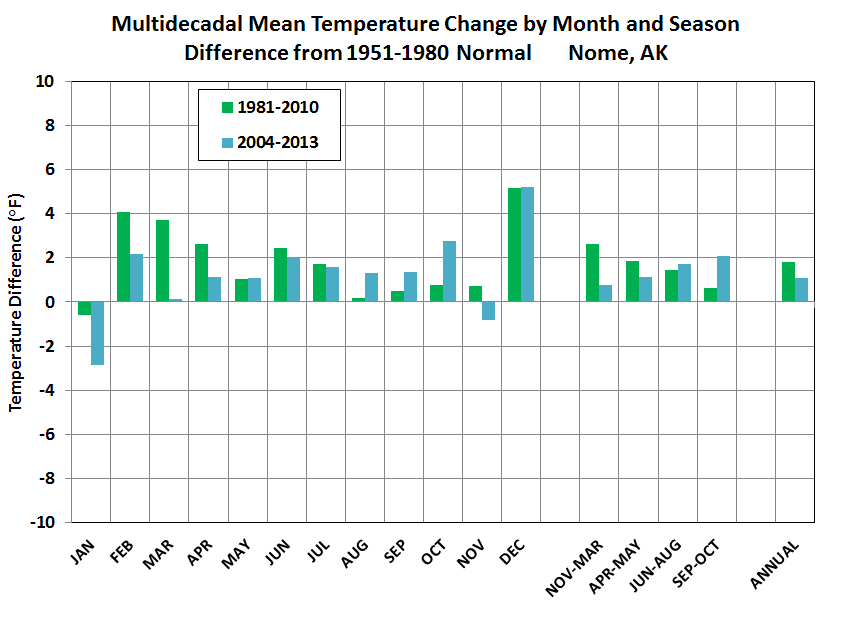 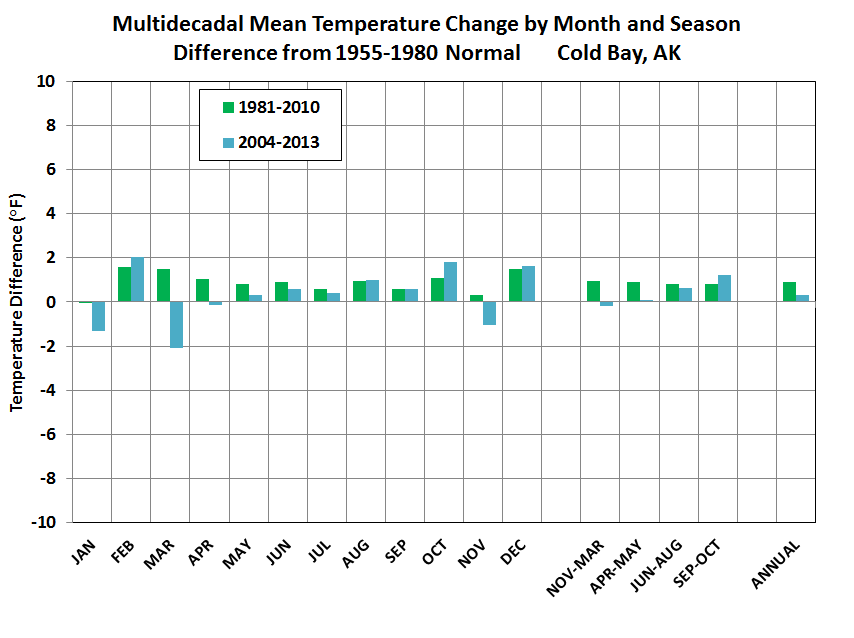