Regular reader Eric suggested that it would be useful to look at some analogs to see if we can find any indication on how long the unusual warmth may or may not persist this winter in Fairbanks.  Under certain circumstances, such as when major climate forcing mechanisms can be identified, analog forecasts can be at least as useful as very-long-range computer model forecasts.

The first analog I looked at was based on past years in which the PDO was significantly positive (at least +0.5 PDO index value) in both November and December.  I also required the November 1 - December 15 mean temperature in Fairbanks to be at least 3 °F above the preceding 30-year normal.  The chart below shows the daily temperature anomalies in thin gray lines and the median of the 10 years in black.  There is a wide range of temperature outcomes for January, but the median is generally on the warm side as we would expect.  I wouldn't regard any of the January peaks and troughs as being statistically significant, but the peak in early February is larger and it certainly looks like warmth is favored in the first third of February. 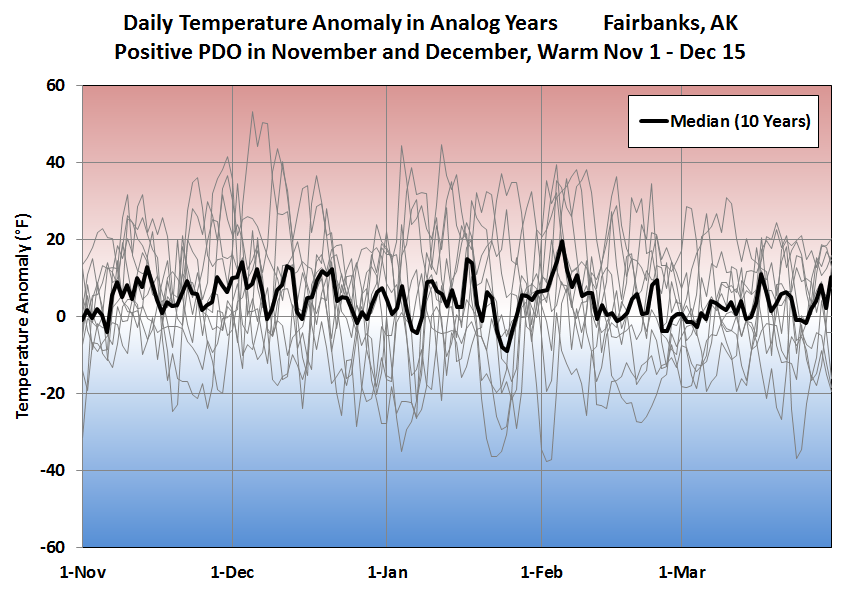 If we consider the fact that El Niño is under way at present, and combine that with the positive PDO in December, we find a slightly more robust indication of warmth through most of December and the first part of January, and again in early February.  It is interesting to note that large cold anomalies are notably infrequent among the analog years for most of December and February, but cold shows up for some of the years in January. 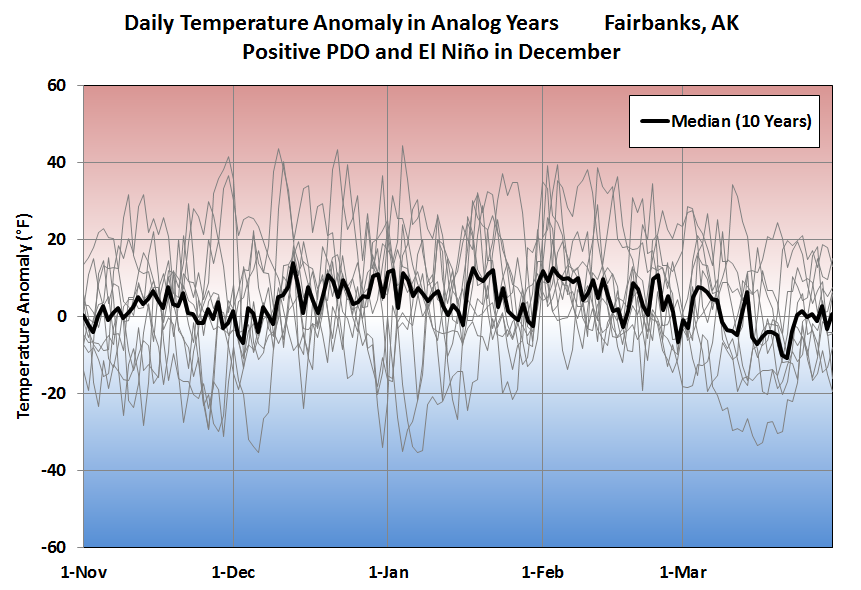 Another aspect of the current climate phase space is that the Quasi-Biennial Oscillation (QBO) is strongly negative.  Combining this criterion with the positive PDO in December produces a forecast that is generally similar, although the warm signal in January looks slightly more significant (see below).  The median temperature is considerably above normal for much of January, but cold extremes also show up in some of the years. 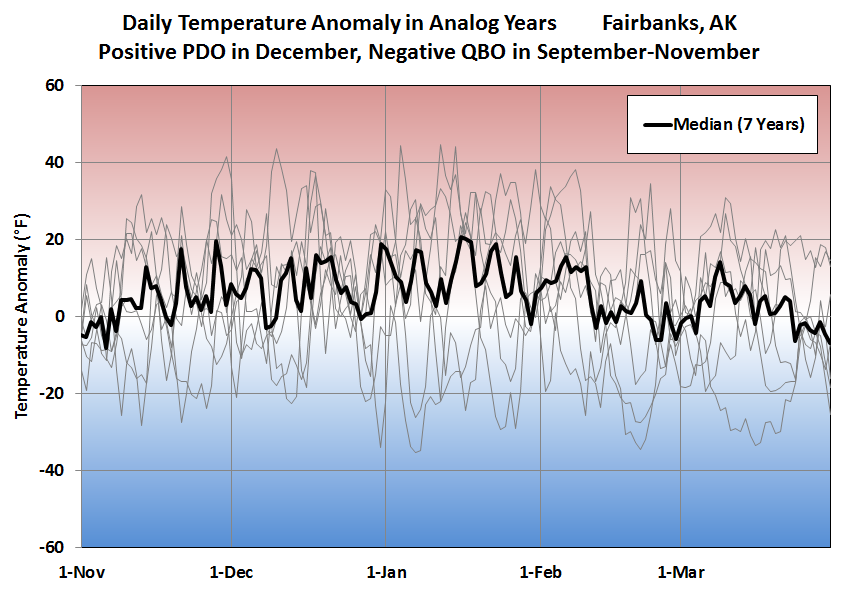 The similarity of the PDO-QBO forecast to the others suggests that perhaps the QBO has only a marginal influence.  I tested this by also finding analogs with positive PDO and positive QBO, i.e. the opposite QBO phase.  Under these conditions the warm signal seems notably less pronounced for January (see below), so perhaps we shouldn't discard the QBO as a useful factor in the forecast. 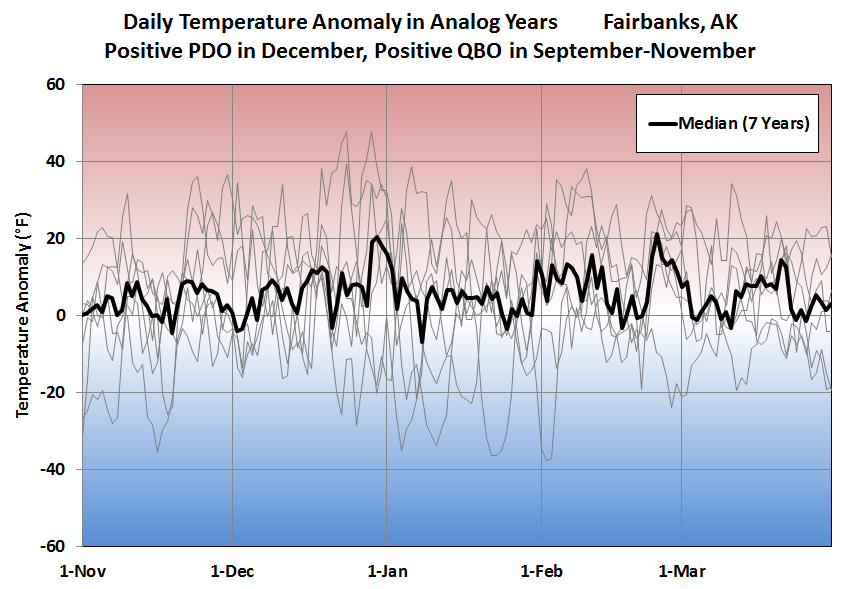 Finally, there has been much discussion lately in forecasting circles about the very large anomaly in Siberian snow cover this autumn.  In the past decade or so, it has been discovered that snow cover over Eurasia in October is a skillful predictor of the subsequent winter's Arctic Oscillation (see e.g. here), and October 2014 produced a near-record snow cover extent in Eurasia.  The implication is that the AO phase is very likely to be negative this winter (especially after January 1st), which would imply higher than normal pressure over the Arctic and lower than normal pressure in parts of the mid-latitudes, including the North Pacific; this in turn would suggest warm conditions in southern Alaska.  I looked at 7 analog years and found only small signals for Fairbanks (see below), although warmth in early February again appears more likely than cold. 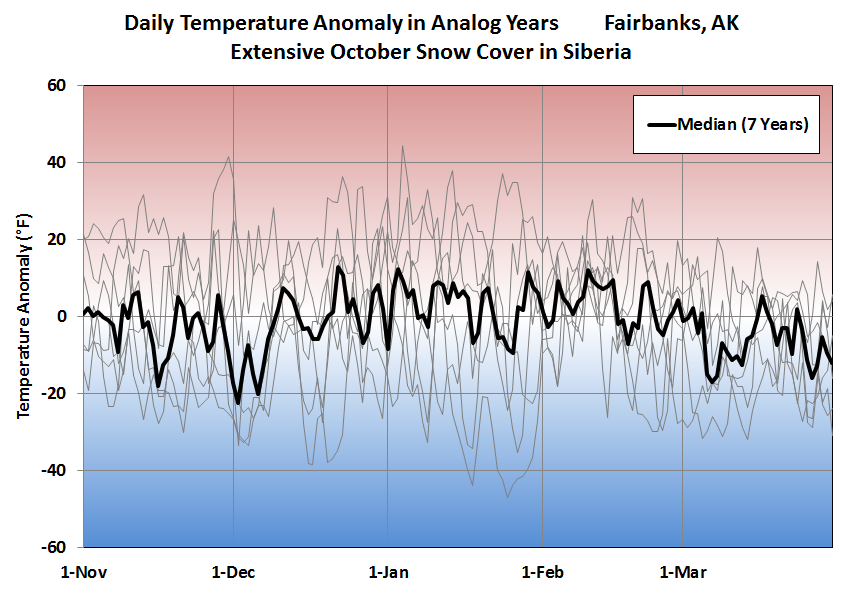 Putting it all together, the grand ensemble of all the analog years produces the result shown below.  Warm conditions are the most likely outcome for most of January and the first half of February, and the probability of warmth appears to be highest for early February.  The range of uncertainty is large for January, so it shouldn't be a surprise if unusual cold shows up for at least a time. 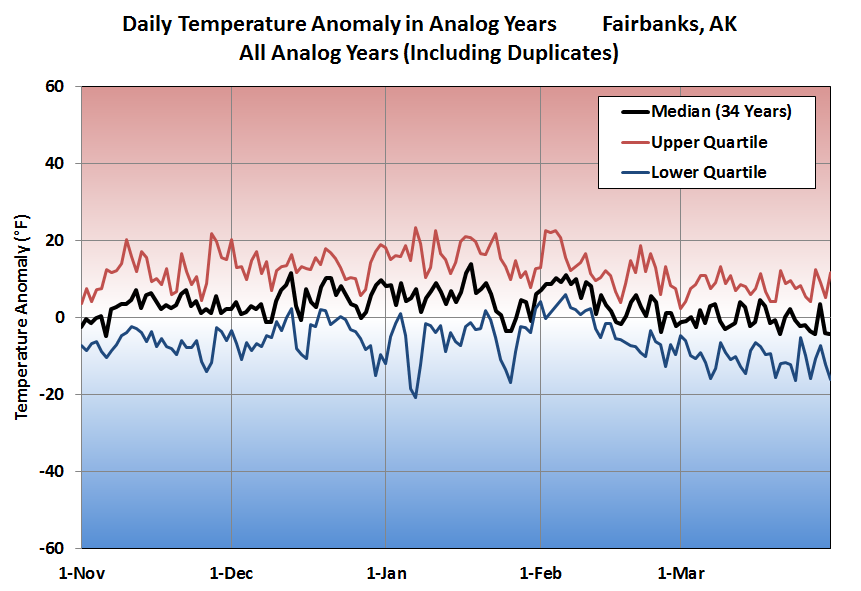