The weather in Fairbanks turned unusually wet in the last week of July, taking the month's rainfall total to 2.78 inches and into the top 20% of the historical distribution for July.  More than a quarter-inch of precipitation was observed on 4 consecutive days ending on the 30th, and remarkably this is only the 4th time this has happened in the history since 1930.  The previous occasions were in September 1942, April 2002, and August 1967, the latter being the occasion of the great Fairbanks flood.

Looking at a slightly broader timescale, Fairbanks recorded significant rainfall on 6 of the 8 days ending August 1st.  This is of course much more common, especially at this time of year.  Historical data show that 6 of 8 consecutive days have seen at least 0.05" of precipitation the following number of times since 1930:

Nearly one-third of all Augusts see a wet spell of this kind, and of course the shift to wetter weather is a symptom of the seasonal transition to late summer.  Recently I've been wondering about the causes of this seasonal shift, so I created a few maps of climatological upper-level flow patterns to illustrate how the circulation changes over the course of the summer.

First we can look at the mean 500 mb height for June, July, and August: see below.  The upper-level height increases universally between June and July, as the atmosphere heats up in Northern Hemisphere summer, but the increase is especially pronounced over the North Pacific and Bering Sea as the Bering Sea trough is eroded.  A related change is that there's less of a tendency for upper-level riding over Alaska in July. 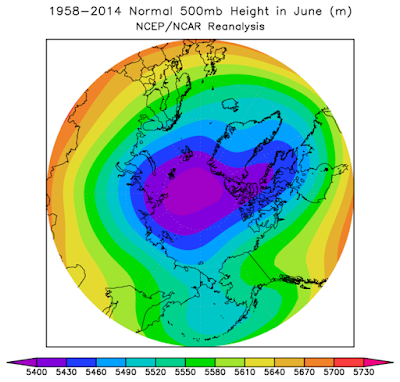 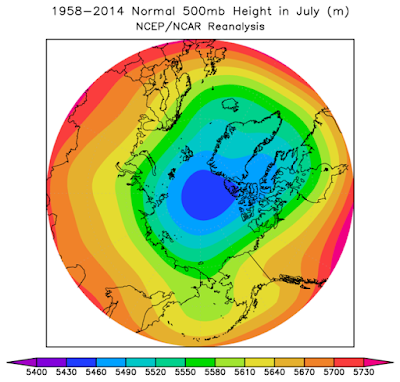 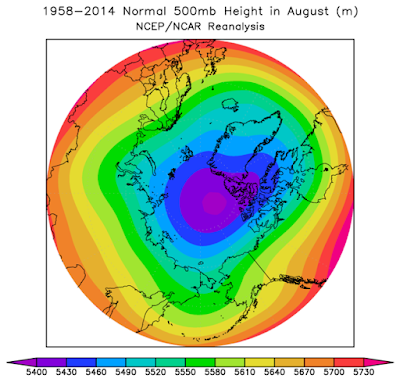 In August the upper-level height drops almost everywhere on the domain shown here, but the decline is greatest at high latitudes, and the 500 mb height actually increases over the Pacific south of about 50-55 °N.  This is a reflection of the changing distribution of heat input: in the northernmost areas, solar heating is much less in August than in July, and the atmosphere cools off accordingly, but farther to the south there is relatively little decrease in solar input and the atmosphere and oceans remain warm or even continue to heat up.

The effect of the changing height pattern is to increase the north-south gradient of height, especially over the Bering Sea, and this in turn causes the normal westerly flow to accelerate.  The following maps show the normal 500 mb wind speed in July (top) and August (bottom), and we can see that there is a widespread increase in wind speed over Russia, the Bering Sea, and Alaska. 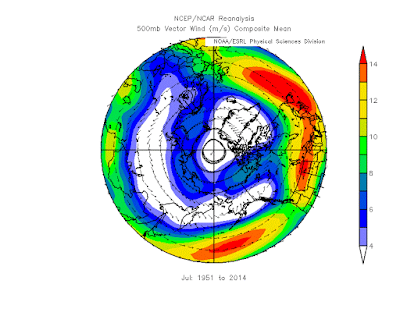 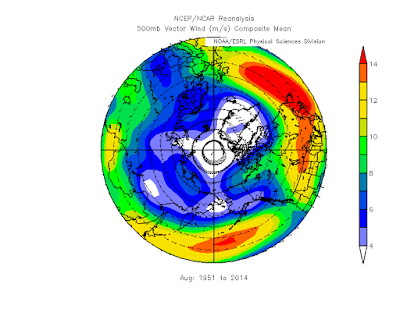 The difference in normal 500 mb wind speed between July and August (below) clearly highlights the zone of energized flow circling the entire Northern Hemisphere, with the maximum change extending across southwest Alaska. 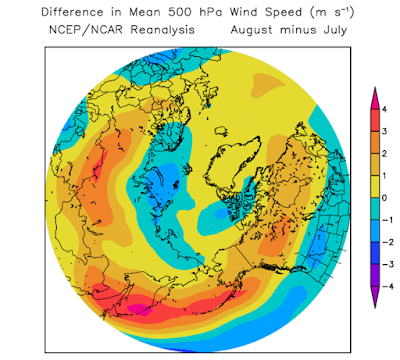 What does this transition mean for interior Alaska weather?  It implies a more progressive flow with a lower chance of persistent ridging and a higher frequency of upper-level disturbances that bring cloud and rainfall.  On the synoptic (large) scale the north-south temperature gradient strengthens from July into August, and it is this gradient that generates and feeds cyclonic weather systems.

To wrap up I'll show the frequency of 500 mb blocking highs and lows.  First, blocking high pressure systems (see below) become less common from July to August across most northerly regions, reflecting the strengthened jet stream; a stronger circumpolar circulation is less prone to developing "kinks" that produce blocking weather patterns.  Alaska in particular sees a much reduced frequency of cut-off high pressure systems as the summer advances. 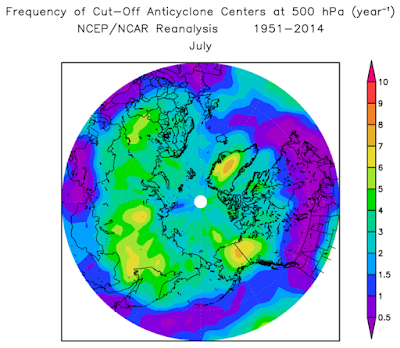 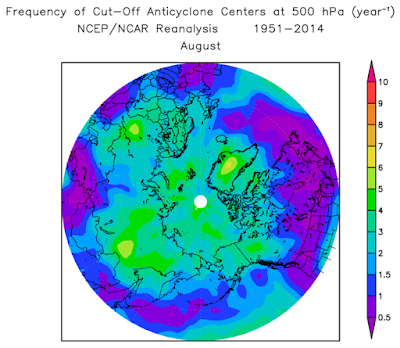 The frequency of cut-off low pressure systems is not as easy to interpret (see below), although the frequency increases over southwestern mainland Alaska over the course of the summer. 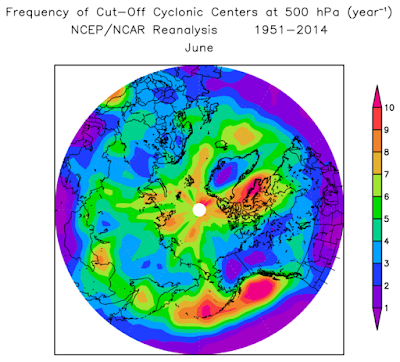 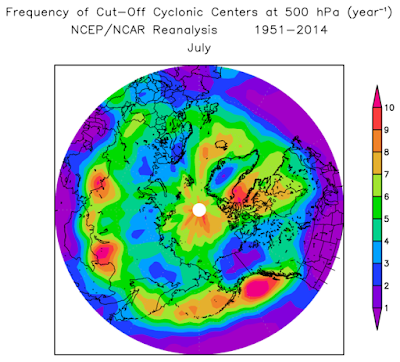 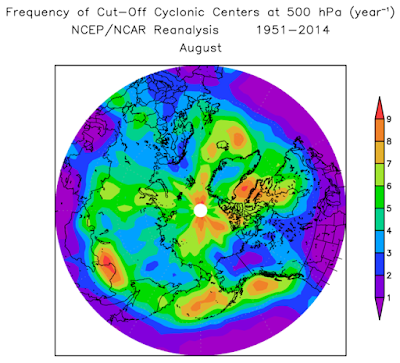 In summary, it's the seasonal intensification of the north-south temperature gradient in the atmosphere that drives the circulation changes in late summer across Alaska and other high-latitude parts of the Northern Hemisphere.  The North Pacific region is especially prone to this seasonal change, presumably because the Pacific Ocean, being the world's largest water body, creates an especially large lag in seasonal warming at middle and lower latitudes.