The Arctic sea ice melt season will be drawing to a close in the next few weeks, and it now appears certain that this year's minimum ice extent will be below last year's minimum.  The following graphic from the Danish Meteorological Institute suggests that a rapid melt-out has been occurring in the past week or two; until then, the ice cover had been holding up quite well.  This analysis now shows 2015 in third place for lowest extent, behind 2011 and 2012. 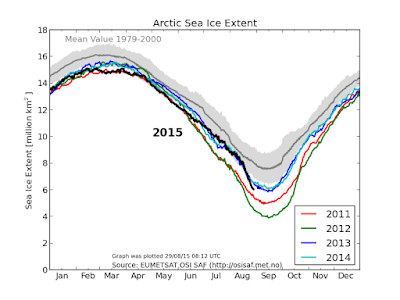 The University of Washington's PIOMAS estimate of Arctic sea ice volume confirms that the situation is worse than last year, with the volume at the end of July falling below 2014 but still somewhat above 2010-2013.  It's the same picture for average ice thickness - see below. 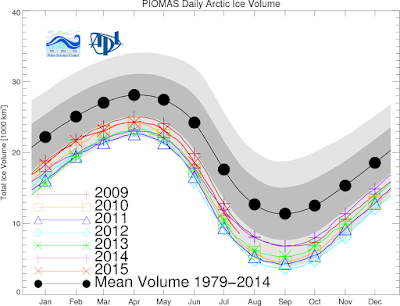 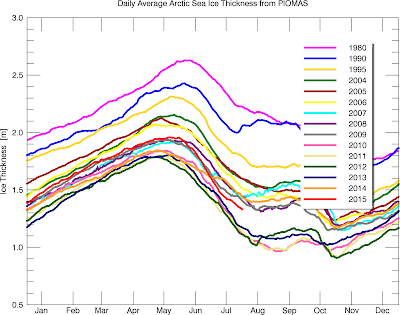 One interesting aspect of the ice situation this summer has been the relative abundance of ice, including some multi-year ice, in parts of the Beaufort Sea not far north of Alaska.  The latest NWS sea ice analysis (see below) shows some ice coverage very close to the coast around Prudhoe Bay and also includes some multi-year ice not too far to the north. 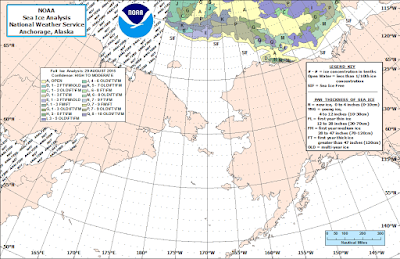 The excellent commentary from NSIDC discussed the multi-year ice situation on August 5.  The top left panel of their figure, copied below, showed a swath of ice including a large amount of 5+ year-old ice (white pixels) north of Alaska in early July.  The old ice has been swept westward by the Beaufort Gyre, away from its usual residence adjacent to Canada and Greenland.  I'm not an oceanographer, but I would speculate that the farther away old ice is transported from its habitual home to the east, the more rapidly it would be prone to melt; so I wonder if this pattern portends a large loss of multi-year ice this melt season.  I suppose another interpretation would be that multi-year ice coverage has expanded in comparison to recent years; it will be interesting to see if this trend can continue. 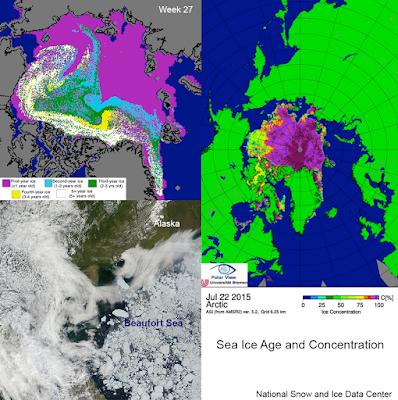