Some cool conditions have emerged in recent days over interior Alaska, with freezing temperatures in the usual spots.  Here are some of the colder reports that I noted:

The Tok School COOP site has somewhat complete data back to 2003, and 2003 was the only other year with these temperatures so early in the autumn (25F on August 1, 2003).  The early frost is not at all unusual at the other locations.

In Fairbanks the balloon soundings reported sub-freezing temperatures at 850 mb on Tuesday (August 11), which seems early but in fact is only unusual compared to the "new normal" of the last 10 years or so.  In the historical data from 1948-2000, the median first date of a sub-freezing 850 mb temperature was August 14, but from 2004-2014 it was August 30, with only 2 of 11 years seeing this event prior to August 19.  Here's a chart of the long-term history of the first freeze date at 850 mb. 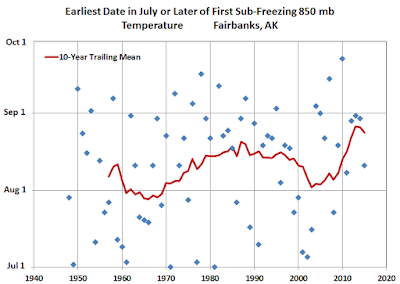 Besides the rather chilly conditions, Fairbanks has seen breezy weather with frequent light rain recently.  Measurable rain has fallen on 18 days since July 15, which is the most in this period since 2001.  At 850 mb, the mean wind speed for August so far is the highest since 2003, with a high frequency of winds from a direction between westerly and southwesterly.  This trajectory of air flow is the most common wind direction for every month from April to September in Fairbanks, but is especially characteristic of August, with a peak in relative frequency on about August 10.  East to east-southeasterly winds aloft are most common from October through March.