Yesterday may well have been the last 80+ °F day in Fairbanks for the season, and if so, the summer's total number of such days will end at 11, which is exactly average (1930-present and 1981-present).  Both June and July were slightly cooler than normal in the mean, but May was much warmer than normal and added 2 days to the count.

The chart below shows the climatological frequency of reaching 80 °F on or after the date shown on the horizontal axis.  As of today there is still nearly a 50% chance of reaching 80 °F again, but the forecast for the next week suggests little chance of it happening in the near-term, and after August 12 the frequency drops to under 30%. 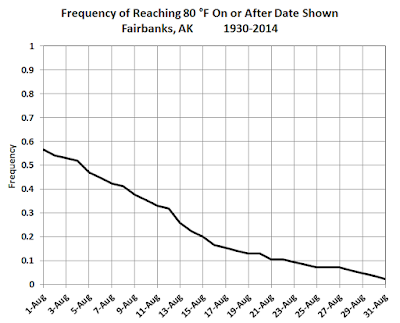