Measurable rainfall has occurred in Fairbanks on 16 of 25 days in August through yesterday, which is tied for 3rd highest in the 1930-present history.  It's still raining today, and computer forecasts show a 100% chance of rain tomorrow, so that will put August 2015 into 2nd place after 1998.  In that year (1998) it kept on raining and accumulated 22 days of measurable rainfall in the month, so we can't break that record.

Interestingly, however, the total rainfall so far this month is right at the long-term normal, so there has been an unusual number of light rainfall events.  This month has already tied the full-month August record for number of days with rainfall from 0.01 to 0.1 inches.  Not surprisingly, cloud cover has been excessive; this month's average cloud cover has been the highest since 1998.

Looking at the forecast, the potential late-month cold spell that we discussed earlier is now a certainty, with the latest GFS forecast showing 850mb temperatures dipping below -5°C on Friday.  The model also expects precipitation over the weekend, and it looks like being snow on the higher elevations of the interior. 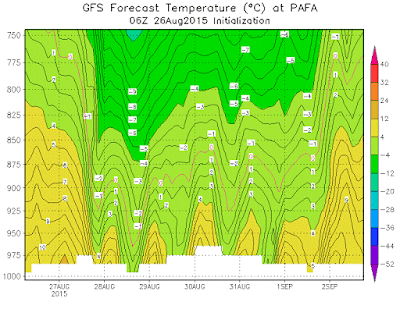 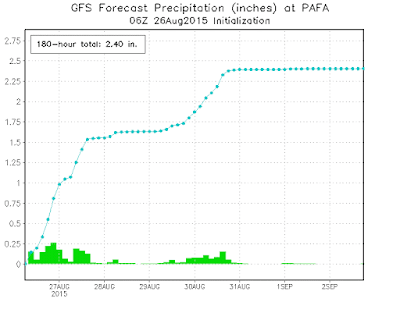 Posted by Richard James at 5:56 AM