A Most Unusual Winter

In standard meteorological terms, the Northern Hemisphere winter season is defined as December through February, and now that it's in the books it is worth looking at how Fairbanks fared for various aspects of the climate.

First, and obviously, it was very warm and very dry.  The mean temperature of +3.0°F was the 6th highest on record (1930-present), with January and February being somewhat warmer than December; but none of the 3 months was in the top 5 for mean temperature.  More remarkable was the near complete absence of unusual cold; only 3 days (December 5, 6, and 25) had a daily mean temperature more than 10°F below normal.  In contrast, 34 days were more than 10°F warmer than normal.  The lowest daily high temperature (including November) was a mere -9°F, so there was not a single day that remained at or below -10°F from midnight to midnight; this is unprecedented for a whole winter season.  The last such day was February 9 of last year. 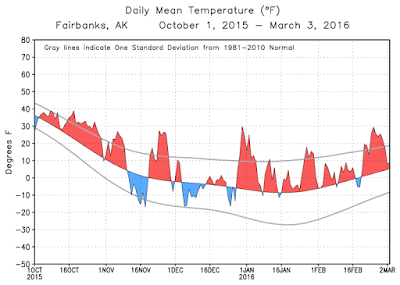 Snowfall and liquid-equivalent precipitation were incredibly meager and both were easily the lowest on record.  The totals (0.13" and 2.5" respectively) were less than 10% of normal, which is astounding for a three-month season.  The snow depth remained nearly constant at either 12 or 13" since December 1, which is the least amount of variation ever seen in Fairbanks for the winter season.

Looking at some other variables that are reported by the airport's ASOS platform, the average visibility was the highest on record since the ASOS was introduced in 1997.  That's not a surprise because it hardly snowed at all; there were only 4 days on which visibility of 1 mile or less was observed, and this is a record for 1950-present.  However, cloud cover was only modestly below normal (7th lowest of 19 years).  As Brian showed in a blog post yesterday, the sea-level pressure for December-February was at record low levels across most of the Bering Sea and western Alaska, so ironically it was a very stormy pattern farther to the west and southwest; it was the persistent southerly flow and downsloping that kept Fairbanks so warm and dry.

Speaking of wind speed, the average daily wind speed in Fairbanks was well above normal and appears to be a record for the ASOS era (excluding 2010-2011, which seems to have a lot of missing data).  Only 53% of the ASOS observations reported calm winds in December through February, compared to about 65% in a normal winter and as high as 81% in 1998-1999.

I've discussed previously the low variance of temperature since the beginning of this year, and it's worth noting again here that the December-February variance of daily temperature anomalies was extremely low.  Only 1997-98 had a lower variance - and that was the last big El Niño winter.  This winter's standard deviation of 10.6°F compares to a long-term normal of 16°F.

Of course with the astonishing lack of snowfall the variance in snow depth was also extremely low (all-time record), as noted above; so one might be tempted to say this was the most boring winter on record.  It's interesting to look at the long-term trend in winter variance of temperature and snow depth - see the chart below.  Both have decreased in the past few decades, and the decrease in snow depth variance is particularly notable.  In fact the snow depth variance seems to be in a well-established long-term downward trend; every one of the past 16 winters has seen snow depth vary by less than what was normal in the 1930-1970 period.  There might be some influence here from changing measuring practices, but I doubt that would explain the bulk of the change.  It's certainly a topic for further investigation. 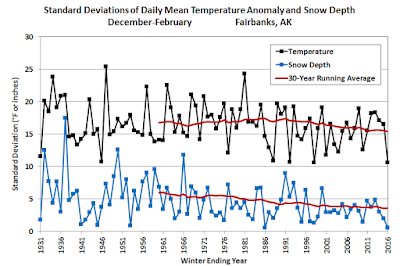 For the sake of completeness, here's the NWS summary for February.