Continued unusual warmth is bringing an early start to the spring thaw in Fairbanks.  Today is the 4th day in a row with a daily mean temperature above freezing, and the airport snow depth reading has already dropped from 14" on Thursday to 11" yesterday.  Other than the great February 1943 chinook event, 4 such consecutive days have only occurred earlier in March 1965 and March 1998.  The 1997-98 winter was of course the last very strong El Niño winter; it was also the year of the second earliest breakup on record in Nenana.  The Tanana River ice isn't looking too healthy today, as a matter of fact: 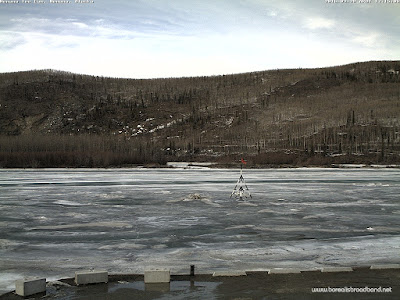 Looking at snow conditions in the hills east and northeast of Fairbanks, the snowpack water content is not far from normal at mid-elevations and is slightly above normal at higher elevations.  Here are the latest snow water equivalent measurements from the SNOTEL sites, compared to the 1981-2010 median:

The relatively healthy state of the snowpack is a reflection of the snowy start to the season in September (the early snow never melted in the hills) and November.  Nevertheless, the snowpack is actually the lowest for the date since 2010; this is also true of the in-town Fairbanks SNOTEL site.

Looking farther afield, here's the March 1 snow analysis (presumably snow water equivalent) from NRCS, for this year and last year.  The south-central part of the state is not as badly off as last year (except at very low elevation), but snowpack deficits are pretty pervasive in the southeastern interior this year.