The seasonal normal temperatures in Fairbanks are also increasingly very rapidly at this time of year.  As seen in the charts below, late March sees an acceleration in the rate of increase of normal temperatures, and the peak warming rate (0.8°F per day) occurs in early April.  Notice how the temperatures aloft show very little warming until the end of March; nearly all of the upper-air warming occurs in the months of April, May, and June. 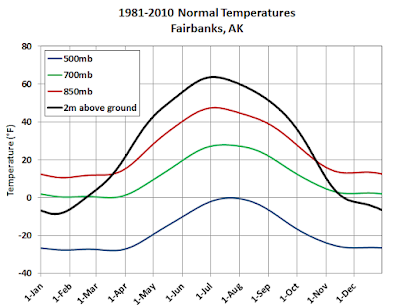 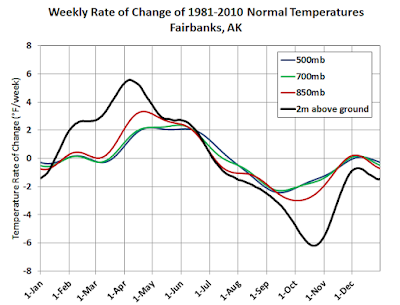 The late March acceleration in surface warming is not caused by loss of snow cover and decreased albedo, as the average melt-off date is April 24 (1981-present), and the record earliest melt-off is April 3 (1970).  I suspect the increased warming has more to do with average cloud cover; until early March, the average cloud cover follows a decreasing trend, allowing for more efficient nighttime cooling.  However, cloud cover reaches its seasonal minimum on about March 10 and then begins a gradual increase.  The change of trend in radiational cooling is probably at least partly responsible for the increased warming trend, as cloud cover is still positively correlated with temperature at this time of year.

Looking at spring warming rates around the state, the fastest-warming sites are as follows (based on peak 7-day warming):

The peak spring warming rates are a little smaller in magnitude than the peak autumn cooling rates, which are greatest at the following sites: