This winter's persistent and very unusual warmth in Alaska has garnered some attention in the media lately, and I've seen a few mentions (e.g. here) of the fact that the lowest temperature observed in the state (so far) this winter was above -50°F for the first time on record.  The near-minus-50 reading on Christmas Day at the Kanuti Lake SCAN site just about qualifies to meet the threshold, but regardless the absence of deep cold is most unusual.  Here's a chart of the statewide minimum temperature for each winter since 1900, according to the GHCN-Daily dataset; this includes many RAWS and SNOTEL sites as well as regular airport and COOP sites (but not certain others like the Kanuti Lake site): 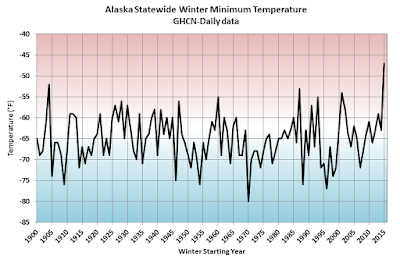 It's interesting to note that there is no long-term trend in the statewide minimum temperature, but lest we conclude that extreme cold is just as common as it used to be, we must recognize that there are now far more observing sites than there used to be; so the chance of picking up an exceptionally cold reading has increased greatly over time.  But this raises an interesting question: what do we mean by "far more observing sites"?  Has the number of stations doubled in the past 50 years?  Tripled?

The chart below shows an estimate of the number of stations that might be considered candidates for observing the state's minimum temperature in any given winter.  This is a subset of all of Alaska's climate reporting sites: many of them have no chance of being the state's coldest, so there's no point including them in this analysis.  My simple and admittedly crude method to categorize the stations was to simply exclude sites that have never reached -50°F or below; for my purpose here, any location that has reported -50°F or lower is a candidate to be included in the analysis.

From the subset of candidate locations, I then examined all sites that were active in each winter (at least 90% complete data from November-March) and finally removed clusters of densely-spaced stations by applying a minimum separation criterion.  The last step is designed to correct for the fact that there are clusters of stations in certain areas (e.g. Fairbanks) in the modern era, and the temperatures reported within each cluster are highly correlated; so it doesn't make sense to count them all as independent additions to the observing network. 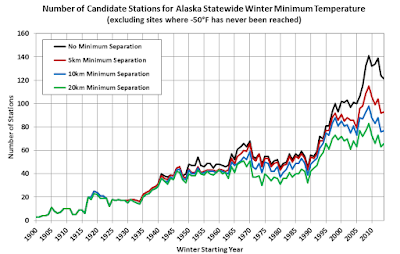 If we don't filter the stations by separation (i.e. include them all), we find that the number of candidate locations almost tripled from the middle part of the 20th century (around 50 sites) to an apparent peak of 141 sites in 2009.  However, as we remove sites that are close to each other, the modern increase is less dramatic; for a minimum separation of 10km, the number of stations has approximately doubled since 1950.  Nevertheless, it's clear that the state has enjoyed a large increase in the number of sites (driven largely by the RAWS and SNOTEL networks, I think), and this is presumably at least part of the explanation for why the statewide minimum temperatures have not increased despite overall warming in Alaska's winter climate.

One other point that stands out to me: note how few stations there were in the early decades of the 20th century, but the statewide minimum nevertheless reached -60°F to -70°F almost every winter.  I'd bet that if we still only had 10 stations active in the colder parts of the state today, the minimum temperature chart would look rather different.

As an aside, here's a map of Alaska GHCN stations categorized by whether or not they have reported -50°F or lower (click to enlarge).  Note that I required at least 10 winters of available data to categorize a station as having NOT reported -50°F, so short-lived stations that never reached -50°F are excluded. 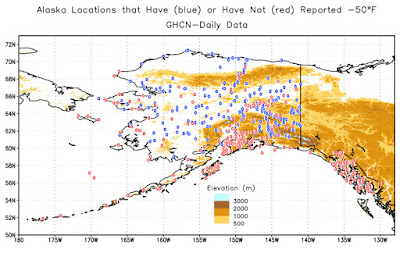 Posted by Richard James at 9:45 AM