NOAA's Climate Prediction Center will release their seasonal forecast for April and for the April-May-June period tomorrow, and interested parties can listen in to Rick Thoman's forecast briefing here.  Last month I posted a seasonal forecast from NOAA's Climate Forecast System (CFS) model, and it seems worthwhile to do the same again; perhaps I'll make this a regular feature of the blog.

The map below shows the latest CFS probability forecast for April mean temperature, and I'm sure nobody is surprised to see a high probability of unusual warmth continuing throughout Alaska during April.  With a strongly positive PDO phase, it's inevitable that the forecast will show warm in southern and southeastern Alaska, and the odds are quite high that this will be correct.  The forecast is calibrated, meaning that the probabilities should reflect the true likelihood of occurrence. 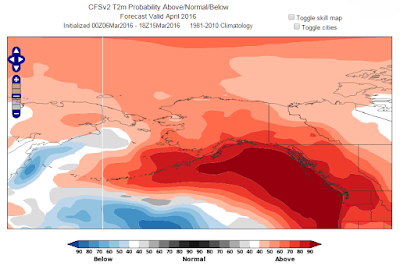 Here are the forecasts for precipitation, 10m wind speed, and solar radiation; the signals are much weaker, because the model has less ability to predict these variables.  Interestingly the model expects solar radiation to be lower than normal in much of interior and northern Alaska in April, i.e. relatively cloudy conditions are somewhat more likely than normal.  It isn't expected to be wet, however.  Parts of the North Slope are somewhat likely to be windier than normal. 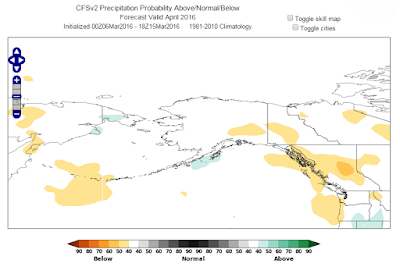 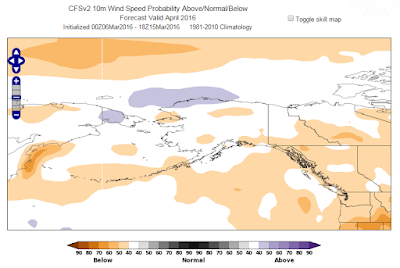 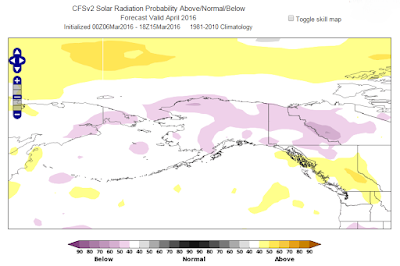 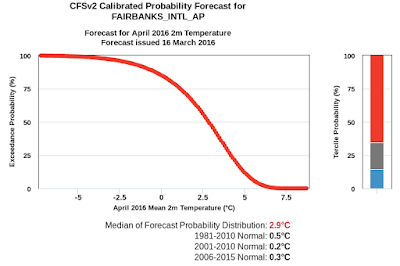 Finally, a quick look at the three-month season (April-May-June) shows the same story: for most of interior and northern Alaska, it is more likely than not that the season will be significantly warmer than normal.  I'll post the CPC forecast maps for comparison tomorrow. 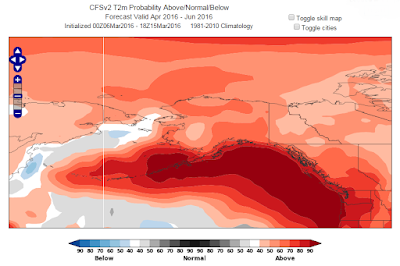 Update: here are the CPC maps for April.  The CPC's above-normal temperature probability is not quite as high as in the CFS forecast - for example, CPC's 60+% probability covers only southern Alaska, whereas the CFS shows it covering most of the interior.  The increased chance of above-normal precipitation in western and northern Alaska is attributed to "anomalously open sea ice and warm open ocean temperatures", which certainly makes sense.

And the maps for April-May-June; here the CPC has boosted the warm probabilities, but the CFS actually shows the probabilities retreating a bit in the south for the three-month period.