While Fairbanks reached a very unusual 88°F yesterday, tying a daily record, the really unusual heat was up on the North Slope.  A remarkable 85°F was reported at the Deadhorse airport (ASOS) and also by the COOP observer in Kuparuk, about 30 miles to the west of the Deadhorse/Prudhoe Bay area.  This is a new all-time high temperature record for both sites and is higher than any temperature in the historical record for any location near the Arctic coast in Alaska.  Umiat has exceeded 90°F in the past, but they are much farther inland.

The chart below shows the annual maximum temperature for the combined period of record from Deadhorse and - prior to 1999 - from Prudhoe Bay.  The two sites are about 5 miles apart, with Prudhoe Bay being closer to the water, so the question arises as to whether the Prudhoe Bay location is cooler in summer.  If so, then it's not quite fair to compare yesterday's Deadhorse record to the old Prudhoe Bay data.  Unfortunately there is almost no overlap in the data from the two sites, so a direct comparison is not possible; however, I was able to compare both sites to the Kuparuk historical data - read on below. 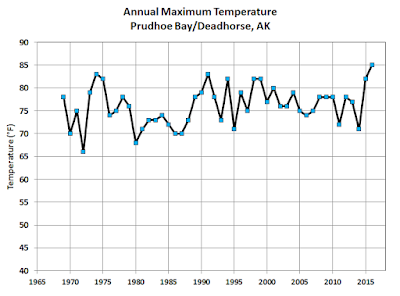 Looking only at temperature data from July, there is complete historical data at Kuparuk from 1984 to the present, except for 1990 and 2011; so we have a nice overlap with both Prudhoe Bay and Deadhorse, allowing us to see if the temperature differences changed systematically in 1999.  See the chart below.  While there is considerable year-to-year variation in the July temperature difference between Kuparuk and the other two sites, there's almost no systematic difference between Deadhorse and Prudhoe Bay; both sites are slightly cooler than Kuparuk, and Deadhorse is just 0.3°F warmer than Prudhoe Bay on average. 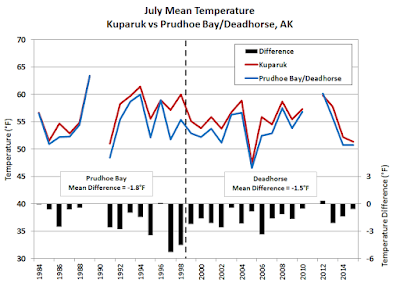 [Update July 18: Kuparuk managed to reach 86°F on Thursday - thanks to Rick Thoman for pointing this out - so they now hold the record for highest temperature near the Arctic coast.]

Posted by Richard James at 5:31 AM