This week is likely to bring the hottest temperatures of the year to the Fairbanks area, as an upper-level ridge intensifies over the state and heats up an already warm air mass.  Here's this morning's sounding from Fairbanks; in the next 48 hours, subsidence under the ridge will warm and dry the lower levels dramatically, and clear skies will allow the sun to do its work.

The chart below shows a time-height cross-section of temperature according to the GFS model, showing that 850mb temperatures are expected to reach about 17°C.  If we trace that warm air down to the surface along a dry-adiabatic lapse rate, we get a surface temperature of 88°F at Fairbanks airport, and typically solar heating will boost temperatures a bit beyond that estimate.  For reference, the last time 90°F was reached in Fairbanks was in June 2013; the high was 92°F on the 25th and 26th, but the lapse-rate method gave a temperature of 88°F.  So lower 90s are certainly a possibility this week. 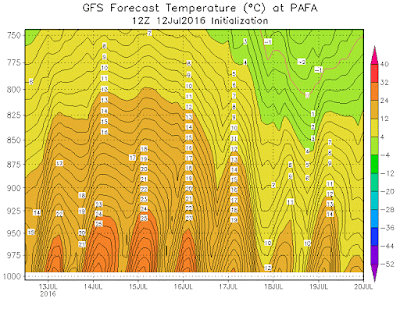 The one factor that might help keep temperatures down a bit is the high level of soil moisture remaining from recent wet weather; the moist ground will not heat up quite as much, and increased evaporation will soak up some energy compared to, say, 2013.  It will certainly be interesting to see if 90°F can be reached - for only the 5th time in the past 20 years. 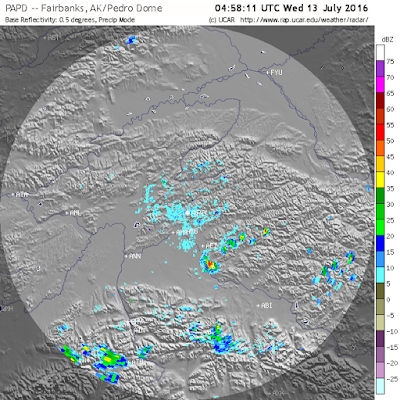