It has been humid recently in Fairbanks - much more so than usual.  In the first 10 days of the month, the average dewpoint measured at the airport was 55.2°F, which is the highest since at least 1950 for this period of the year.  The dewpoint exceeded 60°F on each of the first 4 days of the month, and it appears Fairbanks has only seen 4 such consecutive days on a handful of occasions in the past (1962, 1990, 1994, 2004), and never earlier than the end of July.  Peak humidity in Fairbanks (in terms of dewpoint) is normally at the end of July.

The humid conditions at the surface are consistent with the presence of a very moist air mass aloft too; the Fairbanks soundings show that the July 1-10 dewpoint was the 3rd highest on record at both 850mb and 700mb.  I think the depth of the moist anomaly suggests that the moisture has been imported to interior Alaska, and the high humidity doesn't just reflect (for example) local evaporation from moist ground.

Is there a long-term trend towards higher humidity in Fairbanks in summer?  Yes, but only slightly.  The charts below show monthly mean temperature and dewpoint since 1950 for June, July, and August. 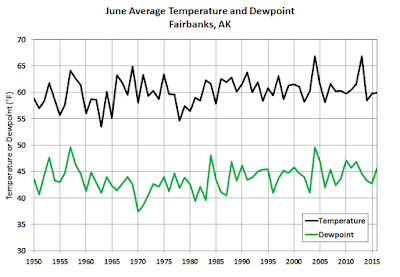 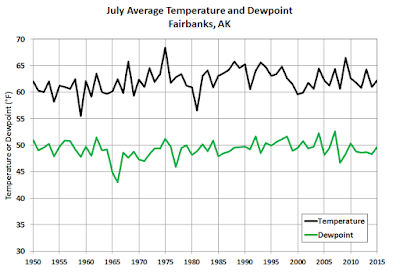 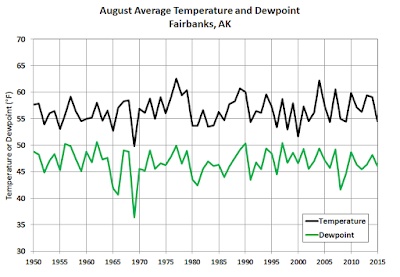 The 1950-2015 rates of change according to linear trend lines are as follows (although the changes are not linear):

In each month the temperature has risen more than the dewpoint, which means that the relative humidity has fallen as the climate has warmed.  To maintain the same evapotranspiration rates from vegetation, the dewpoint would have to increase faster than the temperature, so despite the slowly rising dewpoint, moisture demands have become greater for vegetation (at least at the Fairbanks airport site).