As we look back at last week's hot spell, it's clear that it was historically significant for northern Alaska, as Thursday's 86°F in Kuparuk set a new all-time heat record for any Alaska location near the Arctic coast.  As we noted earlier, the 85°F in Deadhorse also broke the all-time record for the Deadhorse/Prudhoe Bay combined climate history (1969-present).  However, the heat wave may not long be remembered by residents of interior Alaska, as it was not particularly unusual there.  Fairbanks reached 88°F on 2 consecutive days, which is something that has happened 21 times before in the 86 years of NWS/Weather Bureau observations.  If the 88°F is the hottest temperature of the year, as seems very likely, it will be only 1 degree above what's typical for the annual maximum temperature.

Looking at 850mb temperatures, the Fairbanks soundings recorded a peak of 16.0°C, which is equal to the average maximum for the year.  This is a little lower than the GFS model forecast was indicating, so the air mass didn't quite heat up as much as expected.  Additionally, the surface temperature came a degree or two short of what might be expected based on the observed 850mb temperature, and this could be the effect of moist soil as I speculated earlier.  Humidity was high, with the heat index reaching 87°F at the airport after the rain on Thursday afternoon; the heat index only gets this high about once every 5 years, on average.

Here's a map of the maximum temperatures observed during the hot spell, courtesy of the xmACIS2 interface at http://xmacis.rcc-acis.org.  With one exception, all of the reports above 90°F are from RAWS stations, which are known to have a high bias in warm, sunny weather, because of inadequate ventilation of the thermometer.  The highest plausible non-RAWS temperature is the 92°F reported on July 14 by the Two Rivers COOP observer, about 25 miles east of Fairbanks. 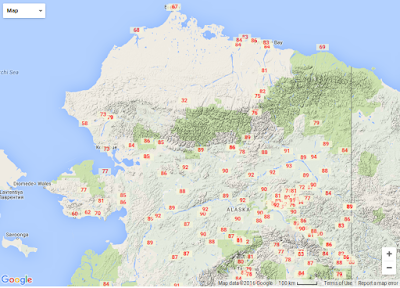 It's interesting to look at the evolution of the temperature profile as measured by the Fairbanks soundings during the hot spell; the animation below shows the twice-daily soundings from Tuesday morning through yesterday morning.  The steady warming and then cooling of the lower troposphere is seen very clearly between 800 and 900mb, which is above the near-surface layer that undergoes rapid diurnal changes.  Notice the light winds throughout the column near the peak of the warmth and the strengthening westerly flow that brought an end to the event.

Courtesy of Environment Canada, here's the 500mb analysis from Wednesday afternoon, when the upper-level ridge was nearing its peak intensity.  Notice the proximity of the ridge to the Arctic coast and the low pressure far to the north over the Arctic Ocean; this is reflected in the sea-level pressure map (also below), which shows a pressure gradient from south to north across the North Slope.  The pressure gradient allowed south winds to prevail over eastern North Slope locations on both Wednesday and Thursday, thereby preventing the sea breeze from coming inland and bringing cooler air to places like Deadhorse and Kuparuk. 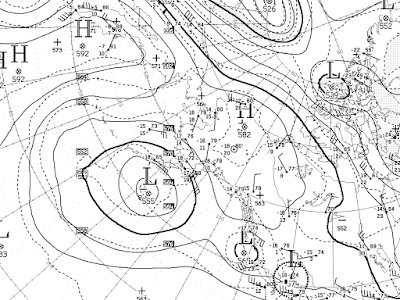 The 850mb temperature analysis from Wednesday afternoon (first map below) shows that the warmest air in an absolute sense was located over the interior, but compared to normal (second map below) the warmth was most anomalous well to the north of Alaska over the Beaufort Sea.  Again it was the unusual pressure gradient over northern Alaska and the southern Arctic Ocean that allowed warm air to flow north unhindered, and this is the key reason why the Arctic coast temperature record was broken.

Finally, to answer a question from reader Mike, here's a chart that shows the frequency of reaching specific thresholds of warmth in Fairbanks on or after dates in July and August.  We're already down to a chance of only 30% that 85°F will be observed again this year, and with a cool and very wet forecast the odds are even lower than that.  There's even a modest chance that Fairbanks won't get out of the 70s again; both last year and 2014 failed to see a temperature higher than 80°F for the rest of the year after this date. 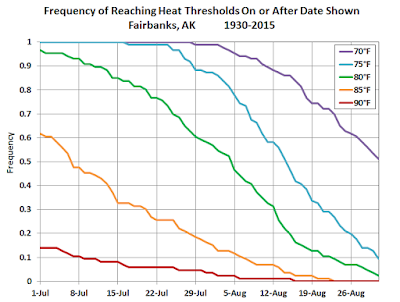 As far as chilly nights are concerned, the median date for first 40°F at Fairbanks airport is August 18, but of course it could happen any time at colder outlying locations.

Posted by Richard James at 5:20 PM