In the previous post a question arose as to whether the very high humidity observations from Fairbanks airport in July were accurate or if perhaps the sensor might be malfunctioning to some extent.  To shed a bit more light on this, I looked at other sites around the interior and also - thanks to a suggestion from Rick T. - looked at the surface dewpoint reported twice per day on the Fairbanks upper-air sounding.

The sounding data clearly support the record July humidity reported by the ASOS instrument - see the chart below.  Last year saw the most humid July on record at the Fairbanks upper-air site (adjacent to the airport), and this July was even more humid. 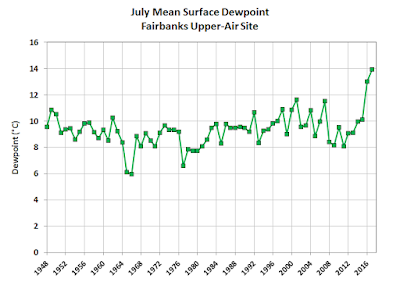 Looking at hourly data from Fort Wainwright and Eielson AFB, the same thing is observed; both of these sites also saw a record high monthly mean dewpoint.  This is a record for any calendar month, not just for July; and at all three sites the previous record was in July 2016. 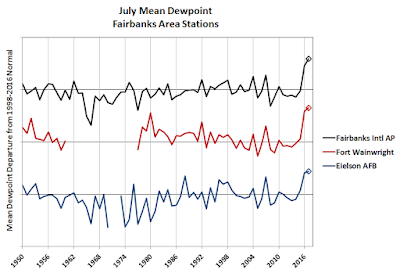 I also pulled out the historical data for several other sites across the interior to see how far afield the record moist airmass extended.  The charts below show the July mean dewpoint for 12 sites divided broadly into eastern and western groupings, with the record high values indicated by markers.  Among the "eastern" sites, Nenana and Northway observed record humidity in July 2017, although the 1973-74 data from Delta Junction and the 1962 record from Fort Yukon look highly suspect, and if we take these out then the record also occurred in 2017 at these sites. 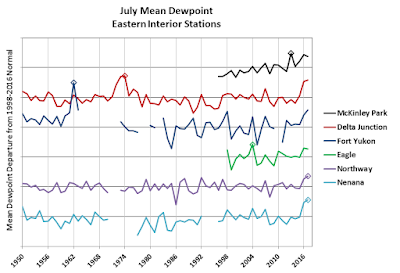 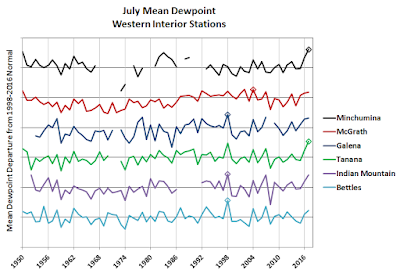 In conclusion, the data suggest that record humidity occurred last month at least throughout the Tanana River valley, as new calendar month record dewpoints were observed at every site I looked at from Northway down to Tanana (assuming the 1974 Delta Junction data is wrong).

The July 500mb and MSLP patterns (see below) do not show an amplified pattern over Alaska, but the modest upper-level ridge over northern and western Alaska was persistent and prevented cool, dry air from reaching the interior from the north.  Daily minimum temperatures were almost entirely above normal in Fairbanks as shown in the chart below. 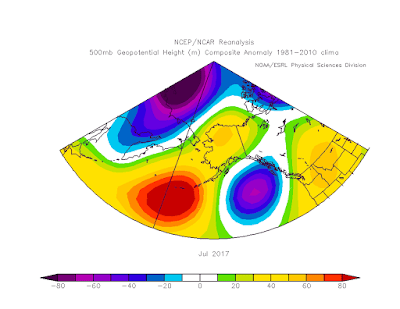 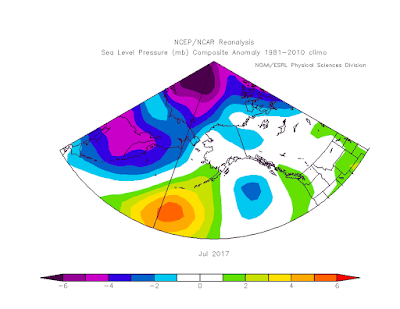 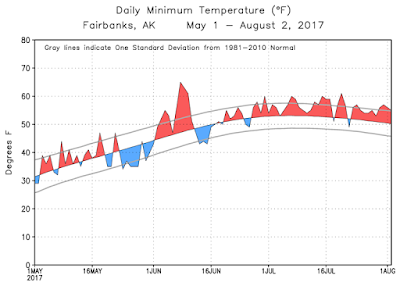 It seems to have been the stagnant weather pattern, more than anything, that allowed humidity to pool over the Tanana River valley, although the widespread above-normal sea surface temperatures (and therefore enhanced evaporation) surrounding Alaska presumably played a role.  Here's a map of recent SST anomalies, as shown by Rick in his recent climate briefing. 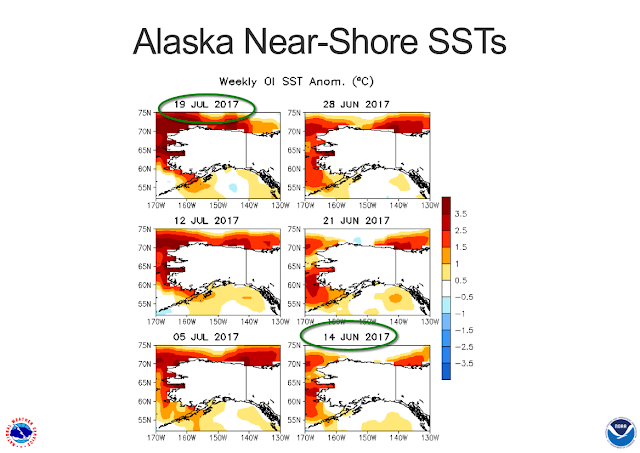 Posted by Richard James at 6:19 AM