Yesterday I posted what I thought was a bit of a mystery regarding solar radiation and temperature data from the Lake Minchumina RAWS, but within just a few minutes reader Gary pointed to a possible solution: increasing shade from vegetation that may have grown up right next to the RAWS instruments.  Here's a 2004 photo from the Western Regional Climate Center website (click to enlarge): 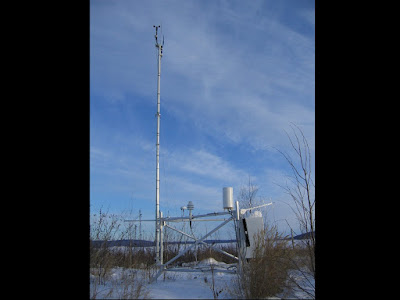 As Gary noted, the photo faces approximately east, so the tree growing up on the right side appears to be roughly southwest of what look like the thermometer and pyranometer in the middle of the arm.  Obviously if this and other vegetation hasn't been controlled in the 10+ years since the photo was taken, then it may have provided increasing amounts of shade over the instruments in recent years; and this would explain the reduction in both solar radiation and warm bias.

Interestingly the hourly solar radiation data support the idea that shading has developed from objects to the south and southwest.  The chart below shows the mean hourly solar radiation (units of langleys) during May on a kind of polar plot; the distance away from the center indicates the radiation amount in each hour, and the angle from the vertical corresponds to the average position (azimuth) of the sun in that hour.  So over the course of the day the solar radiation starts small in the east, increases as the sun moves towards the south, and decreases as the sun goes west.  The blue line shows the averages for 2009-2013 and the red line is for 2015-2017. 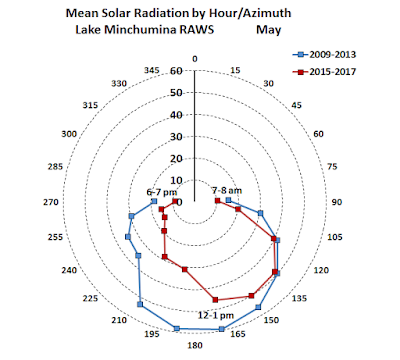 The plot makes clear that the reduction in sunshine is fairly small in the morning until about 11am in May, but then it appears that the shading effect is pronounced by around 1-3pm, when the sun is just west of south.  This is nicely consistent with the apparent location of vegetation in the photo.

The charts below show similar results for June, July, and August.  Interestingly the month of June is the only month in which there appears to be no shading from the southeast, i.e. around 9am-noon, and this makes sense if we consider that the sun rises highest in the sky near the solstice; so whatever vegetation has grown up to the southeast, it's apparently not yet high enough to cause shading in June. 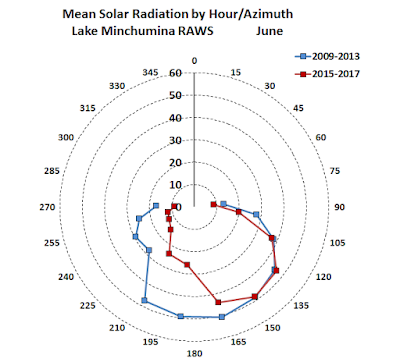 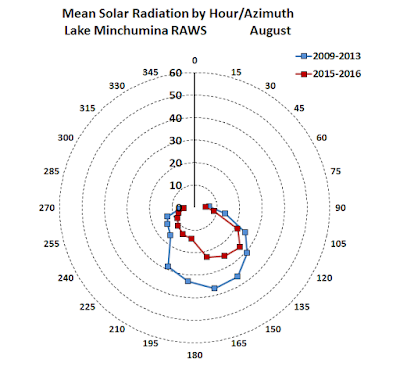 In conclusion, I think the problem is just about solved - it looks like the Minchumina radiation data have been seriously affected by shading in recent years, and this has also altered the temperature bias relative to the nearby airport thermometer.  Final confirmation will await a site visit: anyone want to take a field trip?