Some weeks ago when I was exploring the artificial warming reported by RAWS thermometers on sunny days, I noted a remarkable reduction in the RAWS warm bias at Lake Minchumina over the past several years.  The chart I showed earlier is reproduced below, with the solid lines indicating the difference in monthly means of daily high temperature (RAWS minus airport AWOS).  In 2009-2012 the RAWS high temperatures averaged about 4-5°F warmer in May through July, but in 2015 and 2016 the difference was only around 2°F. 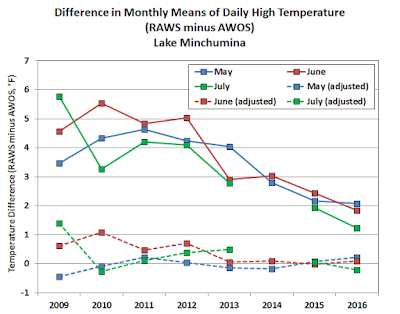 In the previous post I suggested that the systematic trend towards a smaller warm bias could be related to increasing cloudiness; if solar radiation has been lower in recent summers, then there would be less artificial warming of the RAWS thermometer.

To explore this hypothesis, I looked at solar radiation data from the Lake Minchumina RAWS for May through August - see the chart below.  To minimize issues related to missing data, I first calculated the mean solar radiation for each hour of the day in a given year and month, and then I took the 7am-7pm mean while requiring fewer than 10% missing data points to arrive at a valid monthly number. 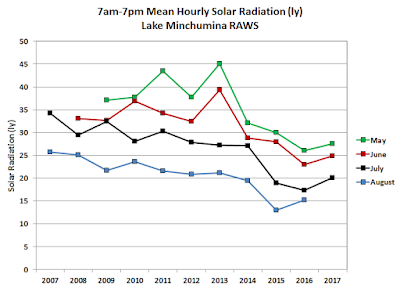 The results are rather striking, with a pronounced drop-off in solar radiation since 2014-2015 at the Lake Minchumina RAWS.  Broadly speaking the decrease in reported solar radiation corresponds to the diminution of the RAWS warm bias, so this seems to be physically consistent.  But is it possible that the solar radiation can have dropped off so significantly and in such a sustained manner in each month from May through August?  This would imply a really significant shift in the summer climate and I'm inclined to be skeptical: a more likely explanation, perhaps, might be that a systematic error has been developing in the solar radiation measurements.  For example, perhaps the sensor has somehow become progressively more obscured or inefficient.

We might have a lot more confidence in the Minchumina RAWS data if other nearby RAWS sites showed a similar reduction in solar radiation.  The map below shows the area we're dealing with. 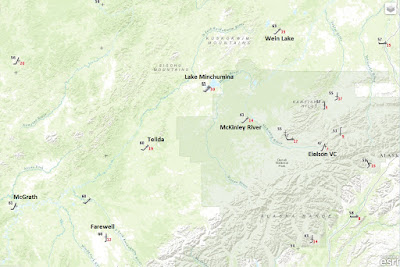 Looking first at data from Fairbanks, there is little evidence of a sustained increase in summer cloudiness and in fact the overall trend in solar radiation is slightly upward since 2007.  But of course Fairbanks is a long way from Lake Minchumina. 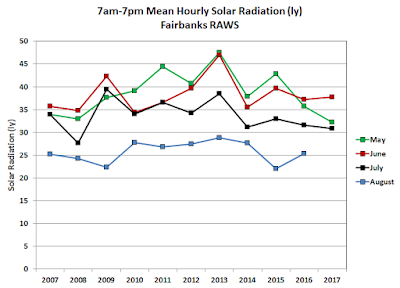 The data from the Telida RAWS (southwest of Minchumina and at similar elevation) do suggest a downward trend in solar insolation in each of the summer months - see below.  The magnitude of the trend is less than at Minchumina, and in particular June and July of this year were comparable to earlier years, which is very different from the situation reported at Minchumina.  So the Telida data seem only mildly supportive of the Minchumina trend. 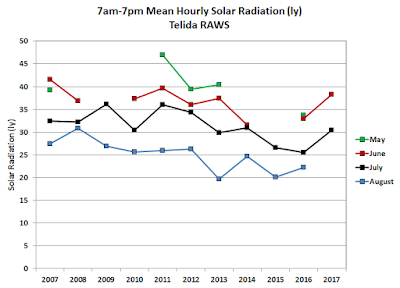 Looking farther to the southwest, the Farewell RAWS has also reported a modest decrease in summer sunshine over the past 10 years, but again the change in the past few years is nowhere near as dramatic as at Minchumina. 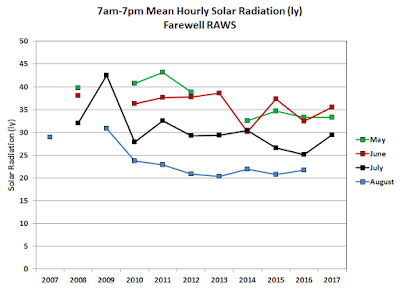 The McKinley River and Wein Lake RAWS also show some indications of diminished solar radiation, but the trends are not pronounced and consistent across all months as at Minchumina.  So again, this is not conclusive. 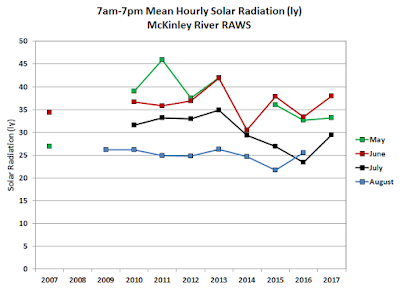 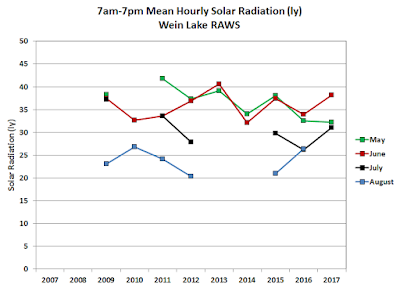 What about other independent sources of information on cloudiness and humidity?  The airport AWOS at Lake Minchumina has reported cloud coverage at sub-hourly intervals for some years, so this should be of some value - see below.  No significant trend is evident, but we must bear in mind that the AWOS ceilometer can't detect high-altitude cloudiness; and moreover the bi-annual oscillation in the cloud cover is very odd and more than a little suspicious, so I'm not sure the data are trustworthy. 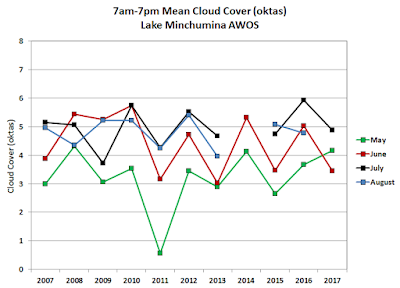 Finally, a quick look at reanalysis data suggests that, contrary to expectations, relative humidity has been lower than the long-term normal over our area of interest in recent years.  Of course, the NCEP global reanalysis is incapable of reproducing the local flow patterns around the Alaska Range and so its broad analysis may not correspond to local trends, but nevertheless it does not support the idea of increased summer cloudiness. 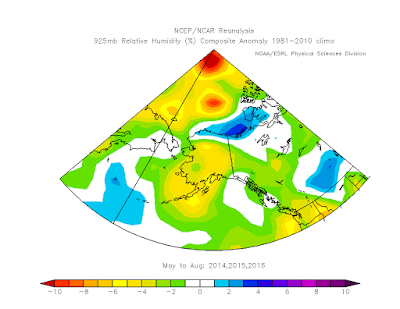 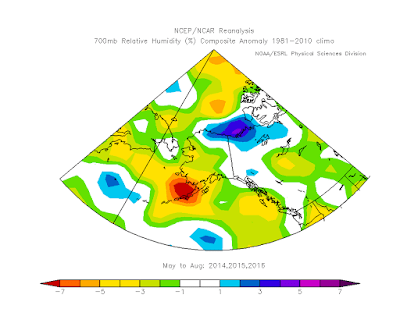 In conclusion, the situation at Lake Minchumina unfortunately remains a puzzle.  The significant reported decrease in solar radiation is quite consistent with the dramatic reduction in the RAWS warm bias, suggesting that recent summers have been consistently and significantly more cloudy than earlier summers; but data from other sites and sources give a mixed message as to whether we should believe the Minchumina trend.  Judging from the multi-site consensus of the RAWS data, it does seem that summers have been relatively cloudy of late in the upper Kuskokwim valley, but that may be the only conclusion we can make.