Summer is waning quickly now in Alaska's interior, and some cooler temperatures are finally showing up.  There have been no freezes in the Fairbanks area yet, but the first freeze occurred this morning at Chicken (29°F).  This is the 3rd latest first freeze in the 21 years of data from Chicken; the record latest was on August 21.

Similarly, the Chalkyitsik RAWS saw its first freeze this morning (32°F); this is also the 3rd latest on record (19 years of data; the record latest is August 22).

Last year at about this time I commented on the persistent warmth at the Goldstream Valley Bottom (Ester 5NE) coop site near Fairbanks, and it's been a similar story this summer.  From July 1 through August 15, the lowest temperature was 38°F, compared to 40°F in the same period last year.  In every other summer in this site's 20-year history, the temperature dropped to at least 34°F in this period, and indeed the average date for the first freeze is August 2.  The unusual warmth has been very persistent in the last few weeks. 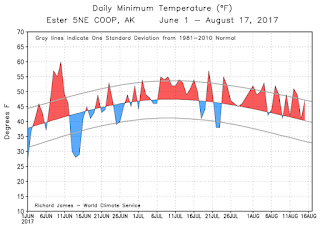 Looking back at summer conditions across the entire state, the highest reliable temperature measurement was 94°F at the CRN site southeast of Tok, although a more remarkable heat wave occurred just 12 days ago at Skagway, when the temperature rose to 93°F - an all-time record for the site.  These were the highest temperatures in Alaska since June 2013, when Talkeetna smashed its all-time heat record with an astonishing 96°F.

Posted by Richard James at 6:50 PM