The persistent (though not extreme) warmth in Fairbanks-land since the middle of summer has lifted the seasonal total of growing degree days to near the top of the historical range.  The chart below shows the daily accumulation of GDDs this year (black line) compared to recent years; the growing season started on a cool note but has ended as one of the warmer summers on record. 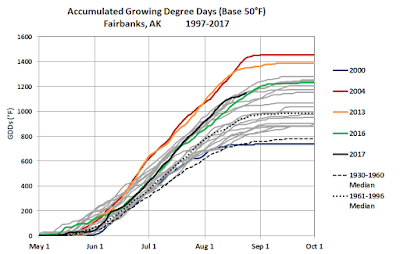 We've looked at the long-term increase in GDDs on a previous occasion, but it's still striking to note that the 1930-1960 normal was approximately equivalent to the coolest conditions of the past 20 years (summer of 2000).

The chart above makes it look like GDDs are usually accumulated nearly evenly through most of June and July, but the daily normals from 1981-2016 show a peak at the beginning of July as we would expect (green line in the chart below). 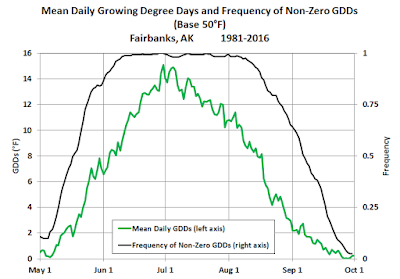 The black line indicates the frequency with which the daily GDDs are non-zero, i.e. the daily mean temperature is above 50°F; this doesn't drop below 50% until early September, but the additional accumulation of GDDs is small after about August 20... usually.  The month of August actually has the highest variance of GDDs of any month, as normal temperatures are much cooler than June or July but variability is increased; in some years the growing season is all but over on August 1, but in other years August provides as much as 30% or more of the seasonal GDDs.