As a follow-up to last week's post on increased rainfall in Fairbanks, I did a broader analysis with a couple of gridded data sets to examine the spatial extent of the changes.  This provides a quicker view of broad trends than digging through data from individual observation sites, which often suffer from missing days or other quality issues.

I then took the average of the percentiles from the six years; see the map below.  The analysis shows an area centered just to the west of Fairbanks where the 6-year average percentile is around 90%, and this is consistent with the Fairbanks data; the last 6 years have all produced June-September precipitation near or above the 90th percentile in Fairbanks. 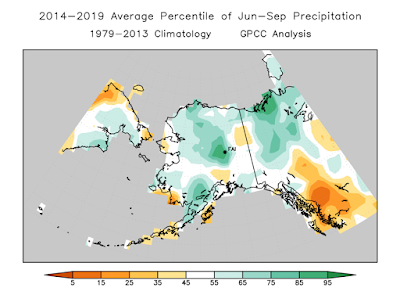 The gridded analysis shows unusually wet conditions extending northwestward from the central interior all the way up to Utqiaġvik, and there's another area of sustained high precipitation near the north end of the Alaska Peninsula.  We should regard these results with caution, however; the number of Alaska sites with consistent long-term precipitation data is small, and the gridded analysis is only as good as the data that goes into it.

For an independent view, the map below shows the same calculation from the ERA5 reanalysis, which is simply a long-term sequence of short-range model forecasts; actual precipitation data is not included as an input.  ERA5 confirms that Fairbanks is not the only place with very unusual precipitation during June-September in recent years, and the wet signal is particularly striking along the eastern North Slope. 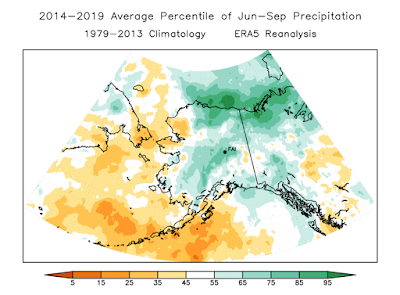 Out of curiosity, I also looked at the average percentile of June-September shortwave radiation, which of course is mostly tied to cloudiness in June and July.  This shows reduced sunshine in the eastern interior and much more so over the eastern North Slope and the Beaufort Sea.  But over the Bering Sea summer sunshine has been persistently high, according to ERA5. 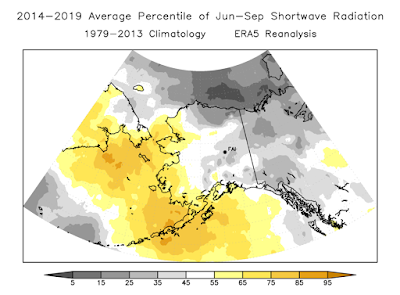 The percentile of sea-level pressure illustrates the weather pattern that has tended to dominate mid-late summer in recent years: a ridge of high pressure over the Bering Sea. 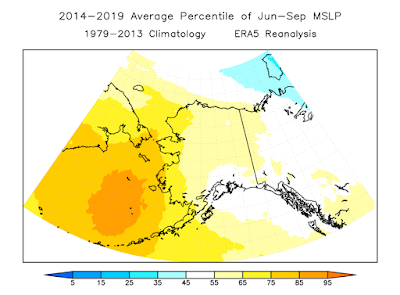 A global view of average 500mb height anomalies since 2014 at the same time of year reveals that the Bering Sea ridge has been one of the largest flow anomalies worldwide - see below.  (Note that heights are higher almost everywhere because of rising global mean temperatures, but the spatial distribution of the changes is particularly interesting.) 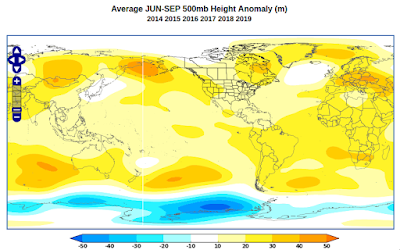 The Bering ridge seems to be part of a pattern of stronger high pressure ridges in the upper mid-latitudes of the Northern Hemisphere (in contrast to smaller height increases in the tropics and the high Arctic).  I believe this is also connected to persistently recurring high ocean temperatures across the North Pacific; I'll write more on this another day.

Posted by Richard James at 7:53 AM