Ever since the 1981-2010 standard climate normals became available in 2011, July has been "officially" the wettest month of the year in Fairbanks.  As noted by Rick Thoman back in 2011, this is a new phenomenon, as August was traditionally the wettest month of the year; in fact, all other 30-year normal periods back to 1931-1960 had August as wetter than July, and in the early decades it wasn't particularly close.

Here's a comparison of the monthly mean precipitation from 1931-1960 with the modern climate normal period; interestingly the July-August total mean rainfall is nearly unchanged, as August rainfall has decreased about as much as July rainfall has increased. 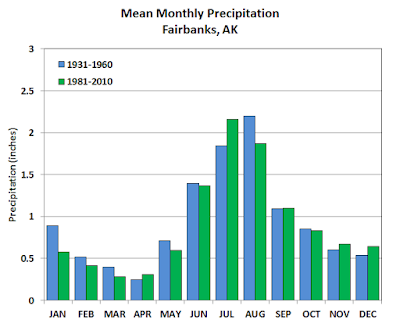 The change of monthly rankings is not just a feature of monthly means and therefore susceptible to one or two huge outliers; the monthly medians show a similar result (see below).  Note that the medians are more stable in winter; for example, the 1931-1960 means were thrown off by the outlandish January precipitation of 1937. 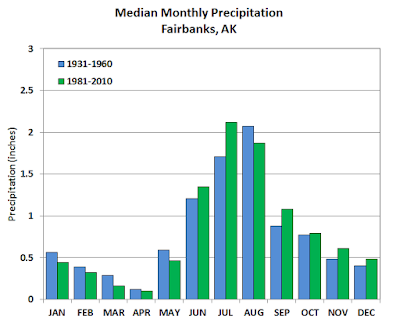 If we add the most recent 15 year period, 2002-2016, the recent change really jumps out; the month of July has been extraordinarily wet in recent years compared to earlier normals. 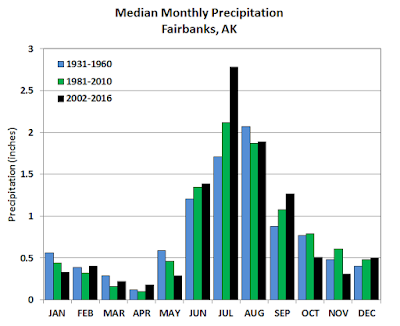 The chart below shows a more continuous view of the evolving differences between July and August rainfall.  In the earliest decades, August really was a lot wetter than July; from 1930-1947, August was wetter in 15 of 18 years.  Contrast this with the past 18 years: from 1999-2016, July was wetter in 14 of 18 years.  This is quite a profound change in the climate. 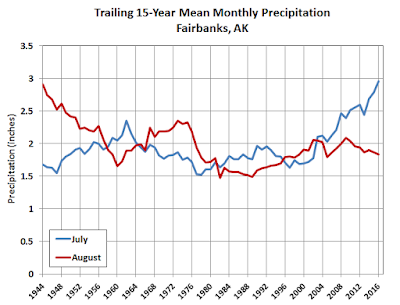 So how do we explain the recent change to higher precipitation in July?  In a nutshell, heavy rain events have become much more common in July, and while the heaviest rain events are still rare, they are occurring frequently enough to cause a dramatic increase in climatological July rainfall.

Here's a look at the running 15-year frequency of daily rainfall events of 1" or more in July and August.  There have only been 27 of these days in July and August since 1930, so this is close to the top of the daily rainfall distribution.  Remarkably, August has not seen a single such day since 1990, but July has produced 8 such days since 2003 (3 of them were in 2014). 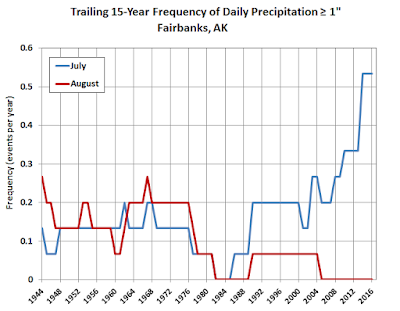 Given that normal July rainfall used to be only about 2" in Fairbanks, an increase like this in the frequency of 1" days is bound to have a significant effect on the long-term averages.  We can quantify this by dividing up the total rainfall into categories of daily rainfall amount - see below for the July breakdown.  Prior to the past 15 years, July rainfall was obtained nearly equally from events of 0.1-0.25", 0.25-0.5", and 0.5-1", but rain events of 1" or more were so infrequent that they contributed rather little to the overall total.  In contrast, the past 15 years have seen nearly equal contributions from the top 3 categories, and the change is most pronounced for the heaviest rain events.  Despite the rarity of 1" rain events, even in the new regime, these events are now contributing a substantial fraction of the total July rainfall. 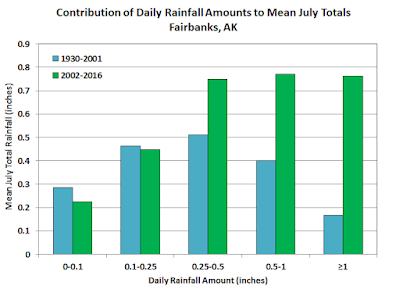 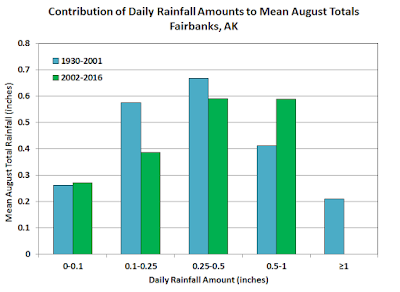 In conclusion, July has become easily the wettest month in recent years in Fairbanks, and this is largely because of a dramatic increase in the frequency of heavy rain events (above 0.5" and especially above 1").  Interestingly, August has seen a paucity of 1-inch rain events in recent years, and this shift appears to date back all the way to the 1970s.

From a physical standpoint, the increase in July heavy rain events is very consistent with the increased capacity of a warmer atmosphere for holding water vapor, and the same trend has been found in most areas of the U.S. and in many parts of the globe: see the 2014 U.S. National Climate Assessment and the 2012 IPCC SREX report (Table 3-2) at the following links:

The absence of a similar trend in August is more difficult to explain and therefore in one sense it's a more interesting result; I'd like to look at whether similar changes have occurred at other sites and dig a little deeper into the physical mechanisms responsible for the observed trends.