Why is August so Wet?

August is known as a rainy month in western and interior Alaska, and this year has already proved the adage in spades.  Extraordinary rains fell across the southern and especially southeastern interior last week, with multi-day totals exceeding 3" in some spots - including Northway, which typically sees only about half of that for the entire month and has only twice had a wetter August in total.  (Coincidentally, Northway also had excessive rain a few months ago, with 2.1" falling on May 1st alone.)

The climatological shift to wetter weather in late summer is an interesting aspect of Alaska's climate that deserves a bit of analysis and explanation.  First, let's establish that August really is wetter than other months in much of the west and interior - as well as farther afield in northern latitudes.  The map below shows the difference between July and August precipitation, based on rain gauge data from 1981-2017 (click to enlarge).  The continental interior south of 60°N (Europe, Asia, and North America) is mostly drier in August than in July, but at higher latitudes increased precipitation is seen quite widely, including over the British Isles, most of northern Russia, much of Alaska, and northernmost Canada.  The change is very notable around the North Pacific and Bering Sea coastline. 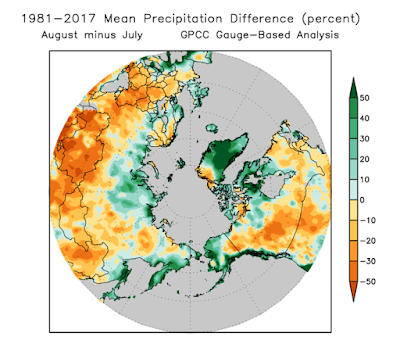 The high-latitude trend is dramatically reversed from August to September in most sectors, with the notable exception of southern Alaska and the Pacific coast to the south of Alaska. 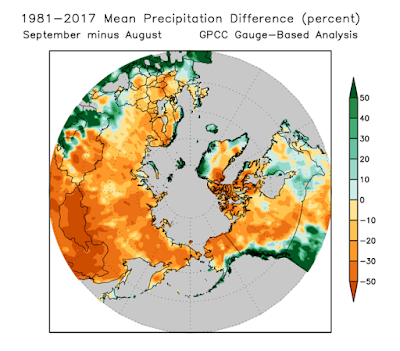 A map of grid boxes where August is the wettest month of the year reveals the general tendency for a seasonal peak in precipitation in late summer for many areas north of 60°N. 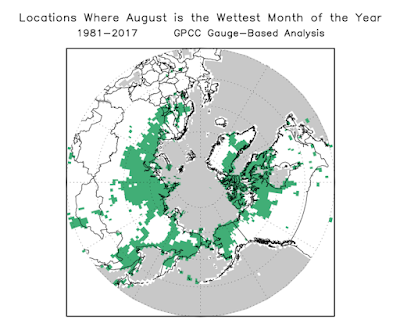 Looking at the climate division data for Alaska as a whole, the July-to-August increase in precipitation is the largest month-to-month change of the year (although September is wetter overall for the state because of the very large amounts that fall during autumn in the southeast).  The climate division data also confirm that August is the wettest month of the year for the North Slope, West Coast, and Central Interior divisions.  The eastern interior is slightly wetter in July, as suggested by the first map above.

If we dig into data from a few key individual climate sites from Anchorage north, we again confirm that August is the wettest month from the Y-K Delta region northward to the north-central interior and the North Slope.  July is slightly wetter than August in Fairbanks (although it didn't used to be), but the daily frequency of rainfall is higher in August, and the number of hours with rain is 25% higher in August than in July.

How can we explain the late summer peak in rainfall for western and northern Alaska, and more generally across the high-latitude regions of the Northern Hemisphere?  In a nutshell, the August maximum occurs because the north-south temperature gradient strengthens in late summer at high latitudes, leading to more vigorous westerly flow and more energetic large-scale low pressure systems that generate widespread rain.

To illustrate, consider the July and August mean 300mb height maps below (the heights are in units of decameters; 900 decameters is about 30,000 feet, so we're looking at the upper troposphere).  Heights are lower where the troposphere is colder, so the purple region represents the swirl of cold air near the pole, i.e. the tropospheric polar vortex.  Evidently the polar vortex strengthens quite a bit between July and August as the angle of the sun decreases over the Arctic and the region of 24-hour daylight shrinks; the total solar energy input over the Arctic is much less in August than in July. 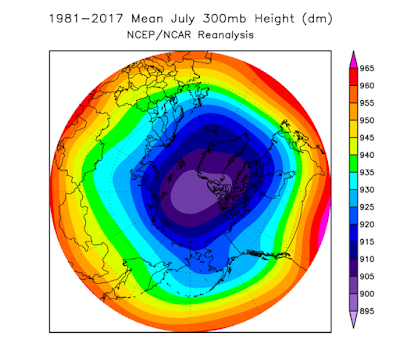 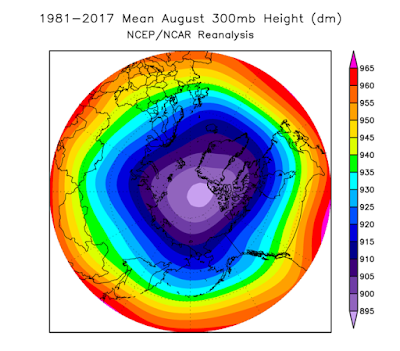 Here's a map to show the difference in heights between July and August. 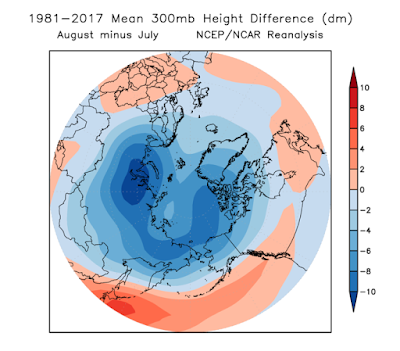 The contrasting changes between north and south imply that the north-south gradient of height becomes tighter in August throughout the whole sub-Arctic region, and this means that the westerly wind speed picks up, because the pressure (height) gradient is the driving force for the jet stream.  Here's the resulting change in westerly 300mb wind from July to August: 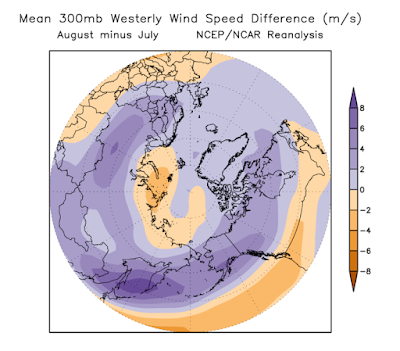 The increase in wind speed is most notable from the Sea of Okhotsk across to southern Alaska, which are areas that see a pronounced increase in rainfall from July to August.  This is no coincidence: the mid-latitude jet stream is associated with large-scale weather disturbances that bring clouds and precipitation to broad areas.

Looking more closely at the Alaska sector, the figure below shows how the jet stream's position and strength evolve through the year in a longitude band just east of the date line (130-180°W).  The jet stream is strongest in winter owing to the strong north-south temperature gradient, and its average location is farthest south in January and February - far to the south of Alaska.  As summer progresses, the North Pacific jet stream weakens and moves farther north, reaching its most northerly position in August at about 50°N.  This is still well south of most of Alaska, but of course there is tremendous variability from week to week, and storm systems can occur over a wide range of latitude. 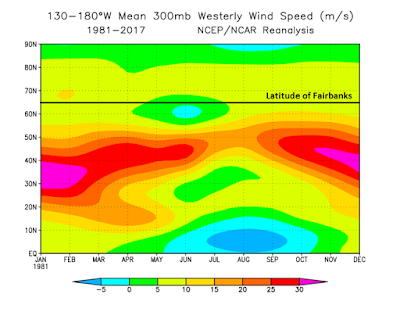 The July-August change that we noted above is evident at about 60°N in the diagram.  The strengthening of westerly flow over the Bering Sea and Alaska implies that more energy is available for the growth of large-scale low pressure systems that migrate generally eastward and bring widespread precipitation across these areas.

Balloon sounding data from Fairbanks confirm the strengthening of westerly flow aloft in August, and at the lower level of 700mb the westerly flow peaks in August before decreasing again in September. 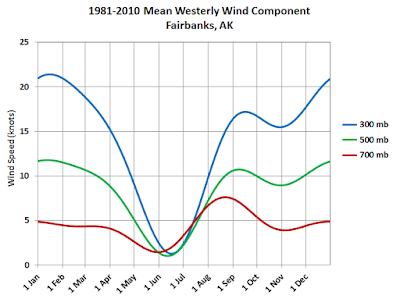 The southward migration of the jet stream in September can partly explain the change to drier conditions in early autumn, but the September drying trend is also closely related to the rapid decrease in atmospheric moisture as seasonal cooling develops in earnest.  On the chart below I've added the seasonal variation in precipitable water in Fairbanks; as the atmosphere gets colder in autumn, it "holds" less water and so precipitation rates must decrease, all else being equal. 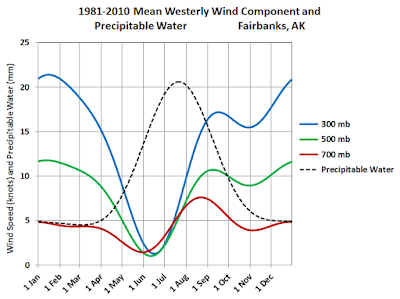 I'll make one last comment regarding an obvious question that arises from the first map: why does the eastern (and especially southeastern) interior turn drier, not wetter, in August?  The August drop-off in climatological normal precipitation is very notable in Northway.  I surmise that this happens because the strengthening westerly flow increases the rain shadow effect in the eastern interior; the August mean flow in this area is actually more west-southwesterly than westerly, and so the Alaska Range is often upstream.  An increased influence of downsloping may also explain the August drying trend in most of western Canada to the east of the coastal ranges (see the first map at top).

Posted by Richard James at 1:22 PM