Faint echoes of September 1992 have been heard in the past week as cold has deepened over interior and southern Alaska, but despite the dramatic drop-off in temperatures, it really is only a shadow of the outrageous early cold that developed 29 years ago.  Here's a comparison of daily mean temperatures at Fairbanks: 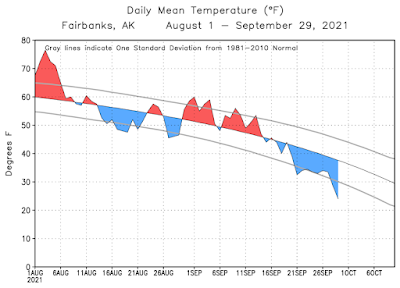 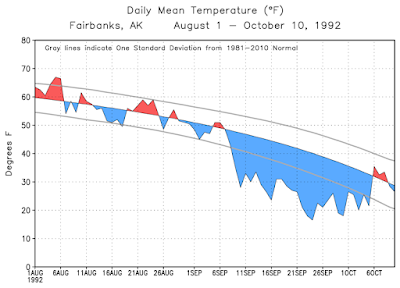 Nevertheless, any comparison to 1992 is bound to fall short, and it's fair to say it has been notably cold for the time of year.  Yesterday Fairbanks failed to reach the freezing mark, and that's the first time a sub-freezing day has occurred in September since 1992.  In two recent years - 2015 and 2018 - it didn't happen until a full month later.
The week ending yesterday is also the coldest week in September since 1993 (not 1992), with a 7-day average temperature of 31.6°F in Fairbanks.  Judging from photos on Twitter, ice has formed on slow-moving sections of rivers.
The well-known interior cold spots of Chicken and Salcha (RAWS site) both saw their first 0°F readings on Tuesday.  Neither station was reporting in 1992, but for both sites this ties the earliest on record.
And here's a notable item from the north end of the Alaska Peninsula:

Here are the statewide temperature extremes this month: notice the expansion of the temperature range as cold develops over interior snow cover while southeastern maritime areas remain relatively mild. 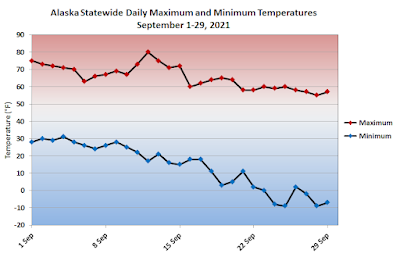