Fire-prone parts of Alaska have enjoyed a bit of good news this summer in terms of lightning and wildfire activity, which were both below normal statewide.  Of course there were some significant fires - notably the Munson Creek Fire near Fairbanks and the Dry Creek fire near Manley Hot Springs - but the total fire acreage was quite low: less than half the 1995-2020 median. 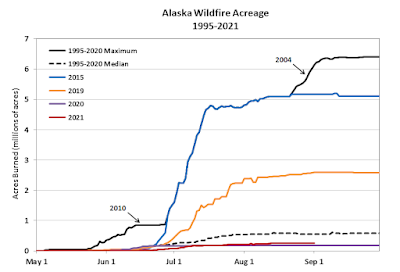 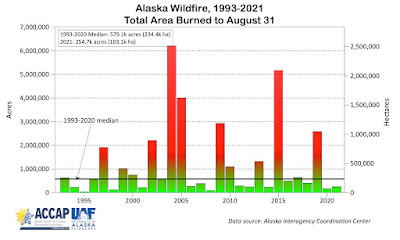 Below is a map of fire perimeters (click to enlarge).  The Munson Creek and Dry Creek fires were the two largest, both about 50,000 acres, and the Cultas Creek fire near the upper Yukon burned about 40,000 acres.  There was also a 30,000 acre fire adjacent to the Nabesna River south of Northway.  Another noteworthy one was the Noatak River fire, which burned 19,000 acres in the Noatak preserve of the western Brooks Range - above the Arctic Circle. 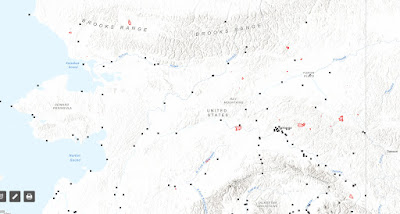 Not surprisingly, total lightning also ended the season well below normal, with only 2018 having a lower strike count in the history of the modern detection network. 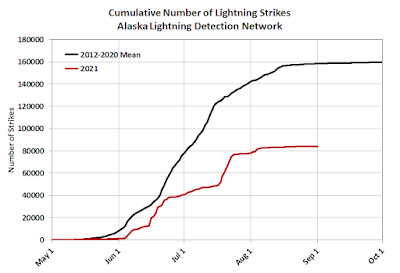 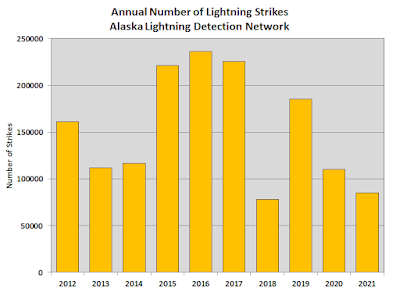 Here's a large part of the reason why: unusual low pressure over the Chukchi and Beaufort Seas, creating a more westerly flow regime than normal for the time of year.  The reanalysis map below shows the rank of the June-August average MSLP relative to the climate of the previous 60 years; the MSLP was easily in the lowest 10% of the historical distribution over a wide area, and was estimated to be 2nd lowest in some areas off the north coast of Alaska.  Obviously this pattern was also the cause of the very wet and cloudy summer in western Alaska. 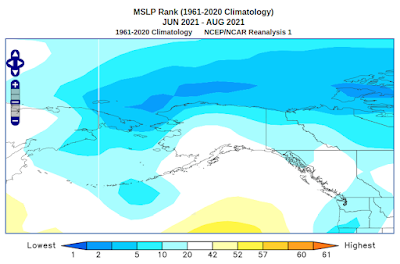