Eastern interior locations from the Tanana to Yukon valleys were the big winners in the early snowfall of the last couple of days, with as much as 9" reported in Tok. 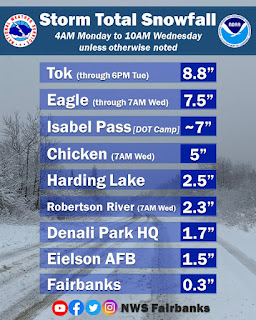 According to the NWS, this morning's reported snow depth of 7" in Eagle is the highest on record for this early in the season, although Rick Thoman notes that the depth seems a bit too high for a 2-day accumulation of 7.5"; one would expect more compaction than that.

Here's a map of reported snow depths today across the southeastern quadrant of the interior. 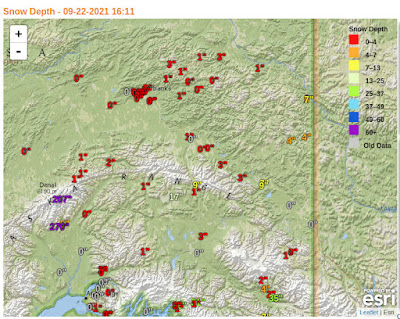 And courtesy of Rick Thoman, snow cover is suddenly quite extensive, although it's unlikely to last in valley-level locations south of the Brooks Range. 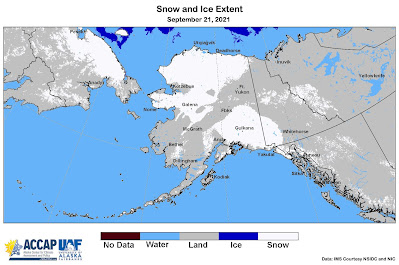 Returning to the cold in Bettles, the high temperature on Monday was only 32°F, which is quite notable for so early in the season, although the rate of seasonal cooling is extremely rapid.  1992 and 1996 saw freezing days about a week earlier (September 14), and 2013 was also notable for early cold (32°F high on the 21st).  Typically it takes until about the first week of October to see a sub-freezing day in Bettles.

Posted by Richard James at 1:55 PM