A couple of months ago, I was involved in a discussion with several UAF climate scientists on the topic of "black swan" climate extremes for Alaska.  We saw the incredible heat wave unfold in late June across southern British Columbia and Washington state, and the question arose: can we estimate what kind of conditions would occur in Alaska if a similarly rare climate extreme occurred - whether in terms of heat, cold, or precipitation.  We're talking about truly rare extremes that shatter previous records by large margins.
One way to tackle the problem is to use simulated climate data from models, and so I've taken a look at rainfall data from a long history of simulations using NOAA's flagship GEFS ensemble model.  To help determine bias and skill in the model, NOAA has helpfully provided 20 years of retrospective forecasts, with 11 ensemble members initialized once per week in 2000-2019, and running out to 35 days in the future.  I used the portion of the forecasts for lead times greater than 10 days so that there's not much correlation between the 11 members, and this amounts to 20*52*11*25 days of synthetic climate, or about 785 years.
Based on all this data, here's the largest 24-hour precipitation total in the entire 785 years.  Note that the data is available at 6-hour increments, so this could be e.g. 6am-6am, or midnight-midnight, but peak 24-hour amounts would be a bit higher if hourly data were available. 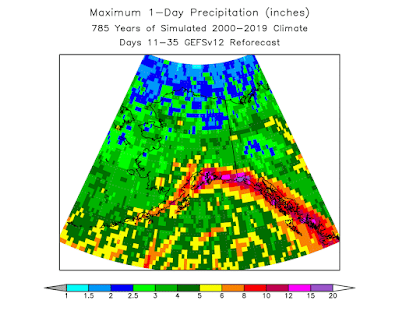 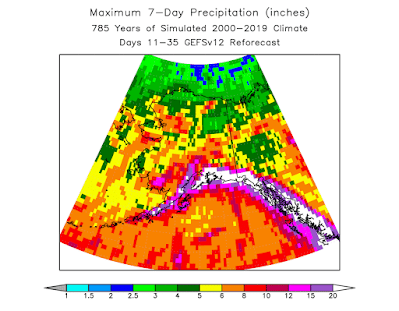 With 785 years of synthetic climate, we can estimate a 100-year recurrence value by taking the 8th highest value.  Here's a comparison with the historical period-of-record maxima for 2-day and 7-day totals at four climate sites that have approximately 100 years of observed data.
All in all, the comparison is quite favorable, suggesting that the model's representation of precipitation extremes may be fairly realistic.  This then suggests that perhaps the 785-year maximum values may not be too far off what we might expect in the current (recent) climate for a return interval of about 800 years.
In turn, we might conclude that the August 1967 flood in Fairbanks may well have been something close to a 1000-year flood.  The 2-day and 7-day GEFS 785-year maxima are 4.7" and 6.1" respectively, compared to 4.3" and 6.1" for the observed period of record.
Interestingly, the NOAA precipitation atlas shows 500-year recurrence values of 5.3" and 6.9" for 2-day and 7-day totals in Fairbanks, which represents somewhat higher extreme values than the GEFS data shows.
Next up - I hope to look at extreme maximum and minimum temperatures in the GEFS model data.  What would a "black swan" heat wave look like in today's climate?  Stay tuned for an answer.
Posted by Richard James at 7:51 AM