Back at the end of July, reader Tracy asked if I could look at the relationship between Alaska winter climate patterns and El Niño or the PDO phase.  I've been very remiss in not getting to this earlier, but now with the change of seasons the topic is more immediately relevant.  Earlier in the year I posted some maps illustrating the El Niño connection to summer and spring conditions, so we can do the same thing for winter.  For the purposes of this post, I've defined winter as November through February: the season that is both cold and dark.

First, the maps below show the distribution of temperature and precipitation anomalies in the top 10 El Niño winters from the period 1951-2013.  The colored columns represent the fraction of years falling in the three climatological terciles, i.e. below-normal, near-normal, and above-normal.  We see that strong El Niño winters most often bring unusual warmth to southeastern and south-central Alaska, but temperatures are most often close to normal overall in the interior and west.  Below-normal precipitation is a common occurrence from Barrow and Bettles down to Cold Bay in these winters. 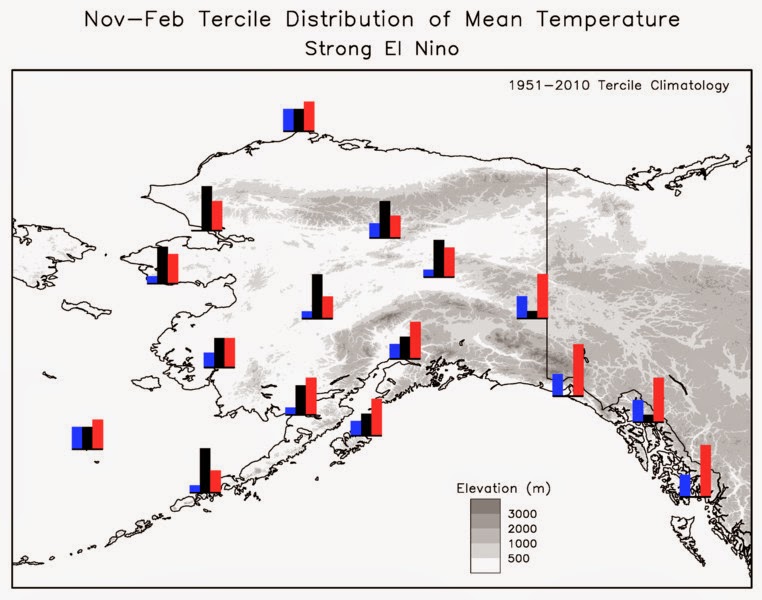 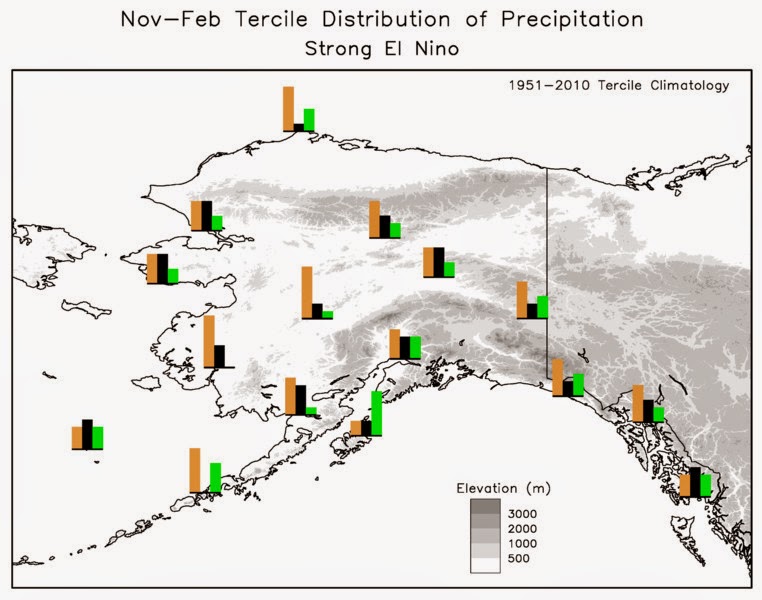 What if El Niño conditions are combined with a positive PDO phase?  This is the situation that we are currently looking at, and it seems fairly likely to persist into winter, as a weak El Niño episode finally seems to be taking hold in the tropical Pacific, and the PDO phase is moderately positive.  As the maps below indicate, a warm winter becomes more likely in most of Alaska - except for the west and at Barrow - when the PDO phase "lines up" with El Niño.  Also, the precipitation signal is more mixed and shows no clear large-scale signal when the PDO is decidedly positive along with El Niño. 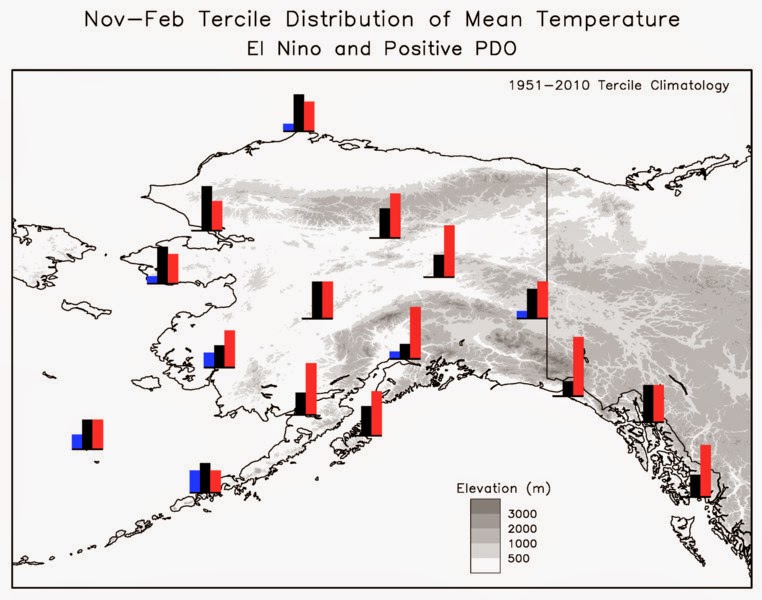 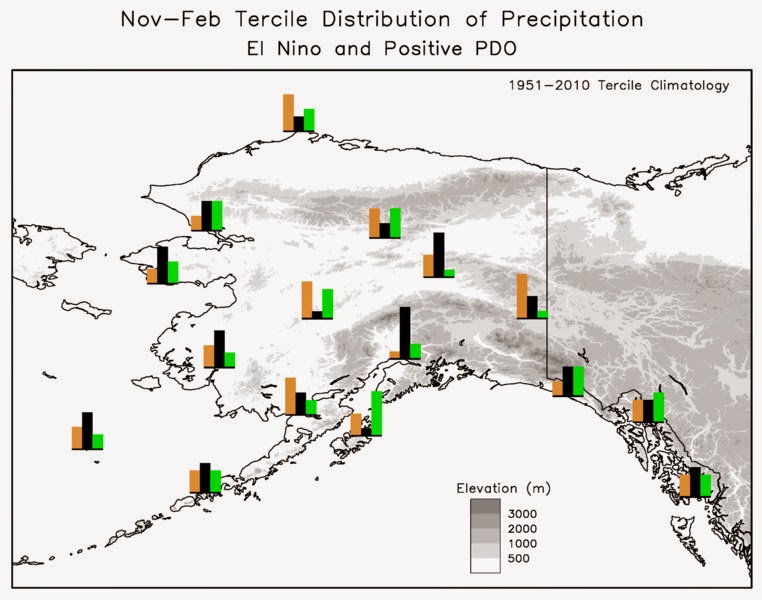 If the PDO were not positive, then the odds would favor near-normal temperatures in many locations (see below) - and the Niño-related warmth in the southeast would be gone.  Recall that we saw the same thing with the earlier maps for spring and summer: El Niño years look vastly different in Alaska depending on the PDO phase. 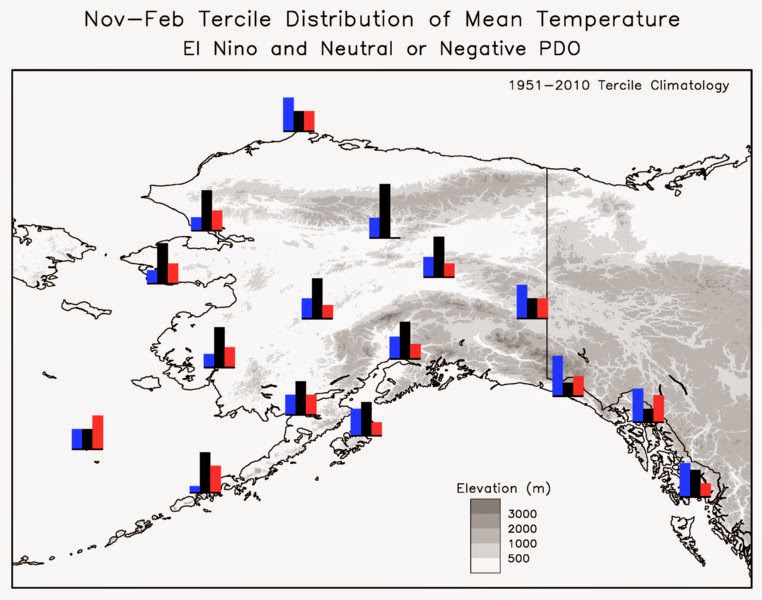 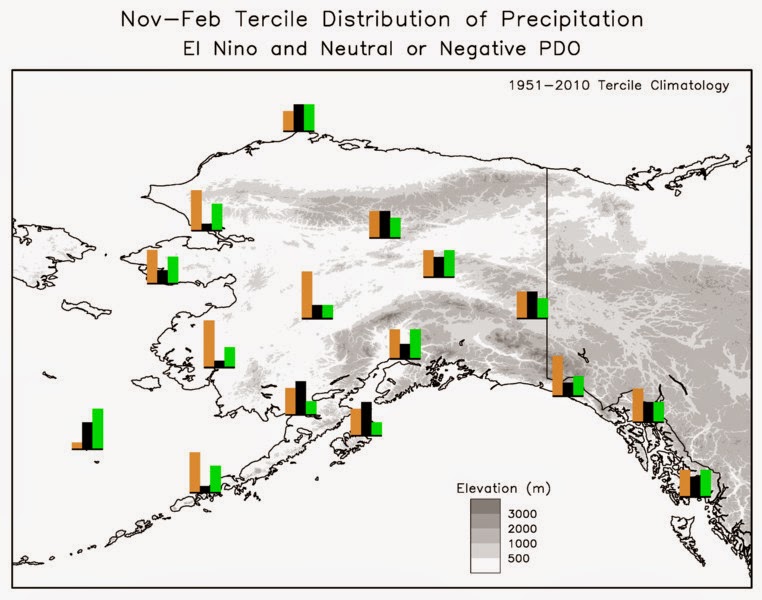 To confirm the strong connection with the PDO by itself, the maps for the top 10 positive PDO winters show an overwhelming signal for warmth in the interior, south-central, and southeast. 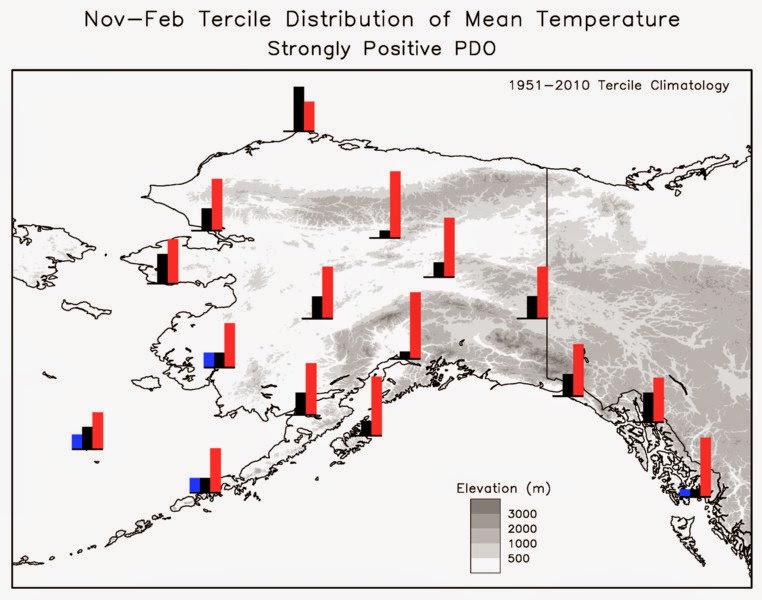 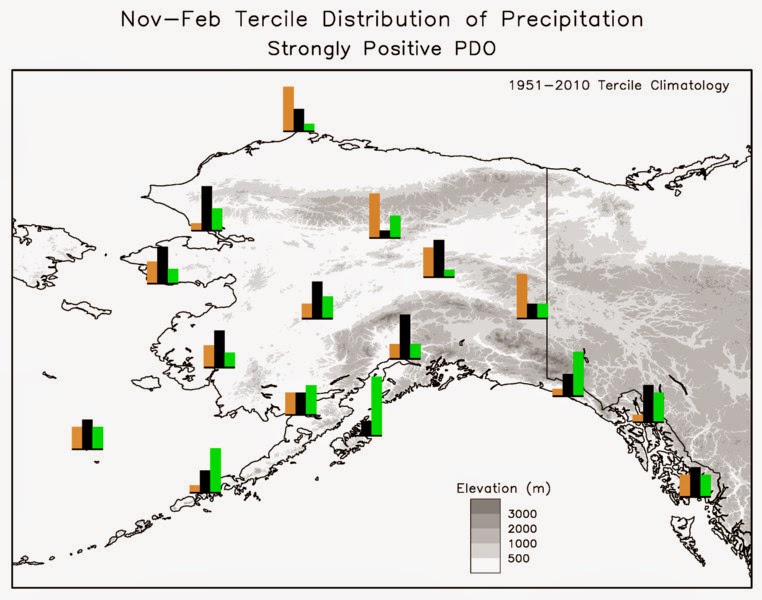 Finally, below are the mean anomaly maps for winter sea-level pressure and 850 mb temperature in the top El Niño winters and top positive PDO winters.  These maps suggest, interestingly, that the patterns are really quite similar between El Niño and the positive PDO, but the surface warmth is much more dominant in the case of the positive PDO.  Cloud cover differences may be an important part of this, but that will have to be a topic for another day. 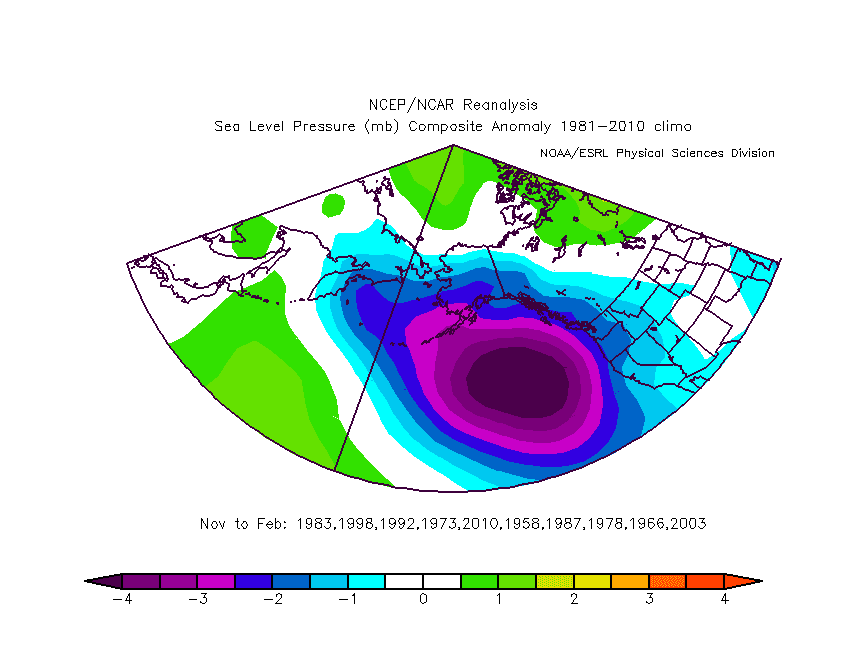 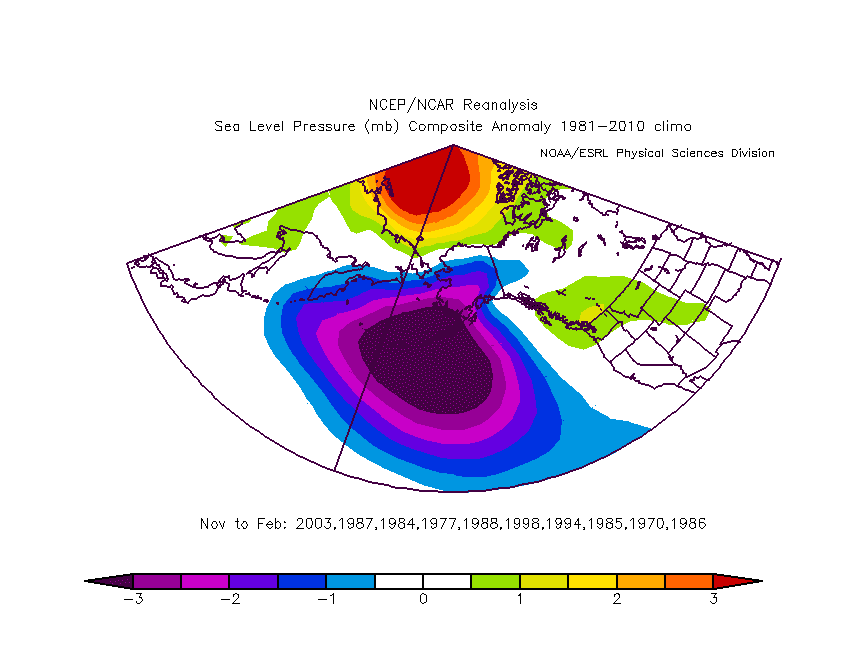 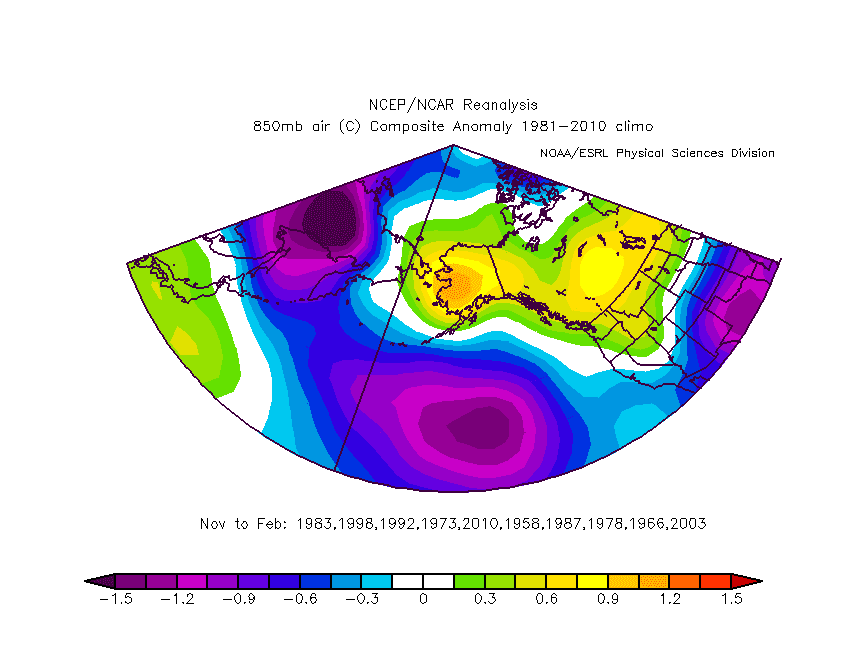 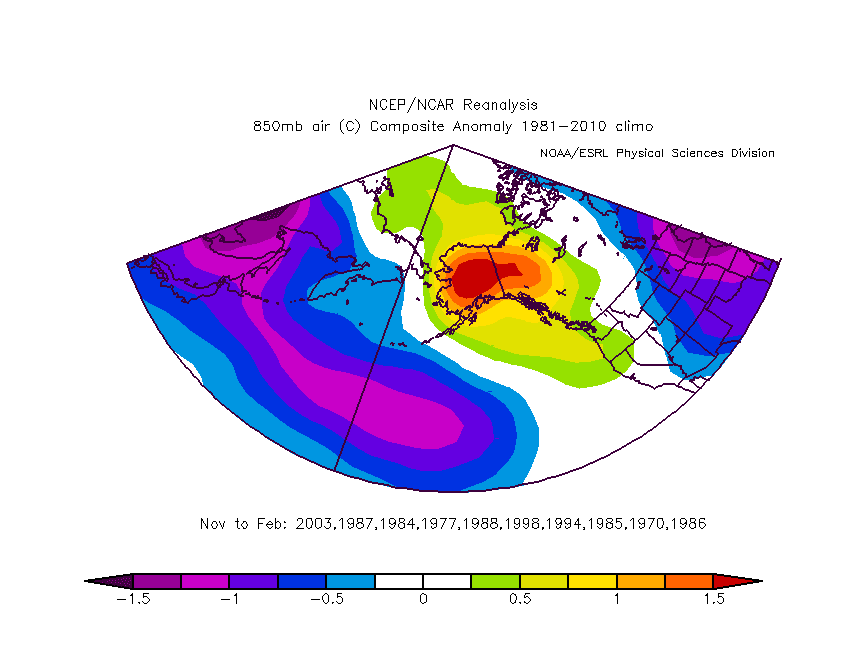