An article a couple of weeks ago in the Alaska Dispatch discussed the potential for El Niño conditions to develop in the tropical Pacific this summer or fall, and speculated that another warm, dry summer might result if El Niño does in fact emerge.  So I thought it would be interesting to look at the strength of the connection between El Niño and summer temperature and precipitation in Alaska.  To do this, I looked at the June-July period as representative of high summer, and I picked out the top 10 years for El Niño conditions, based on a bivariate ENSO index that I feel is a good measure of the El Niño/La Niña (ENSO) phenomenon.  I then examined how many of these years produced above-normal, near-normal, or below-normal temperature and precipitation in June and July, based on three equal divisions (terciles) derived from the 1951-2010 historical data.

The maps below show the results, with the height of the columns corresponding to the number of years in each category.  Warmer than average conditions are definitely favored in most Alaska locations in El Niño summers, and dry conditions are more common than wet from Anchorage to Nome, Kotzebue, and Barrow; but elsewhere (including in Fairbanks) the precipitation patterns are mixed. 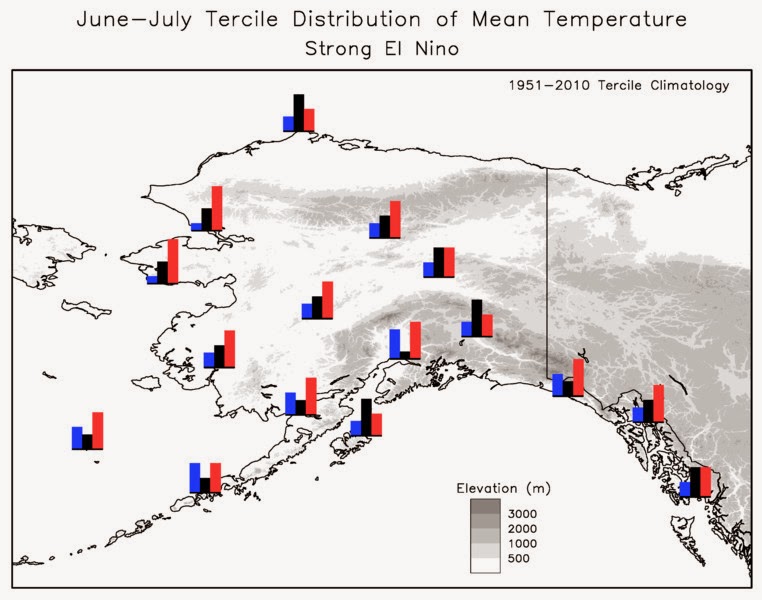 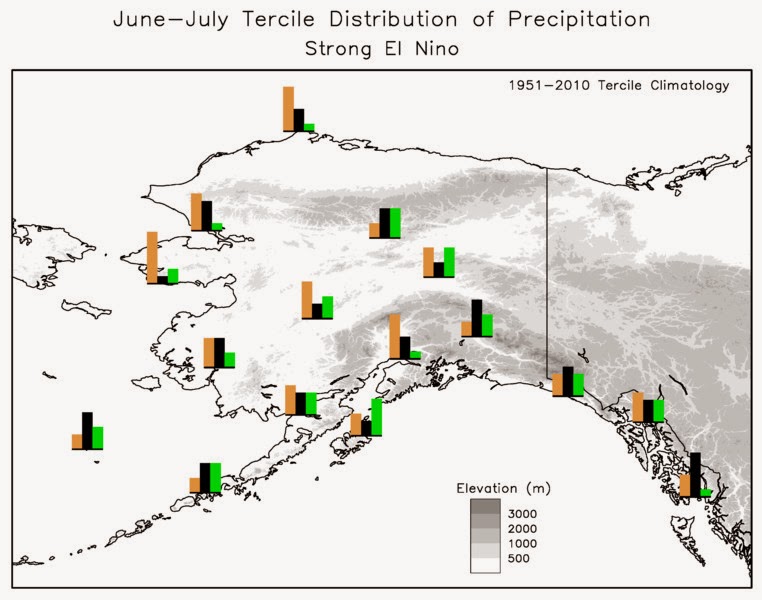 We know that the phase of the Pacific Decadal Oscillation (PDO) is also a very important influence on Alaska climate, so I then subdivided the top 20 El Niño years by whether the PDO was positive or not.  Compare the two maps below: the first shows the climate for nine years with both El Niño conditions and a significantly positive PDO phase, but the second map shows El Niño conditions combined with a near-neutral or negative PDO phase.  The difference is stark; unusual warmth is strongly favored in southern and central Alaska when the "warm" PDO phase lines up with El Niño, but a cool summer is actually more likely in the southwest in El Niño years with a neutral or negative PDO. 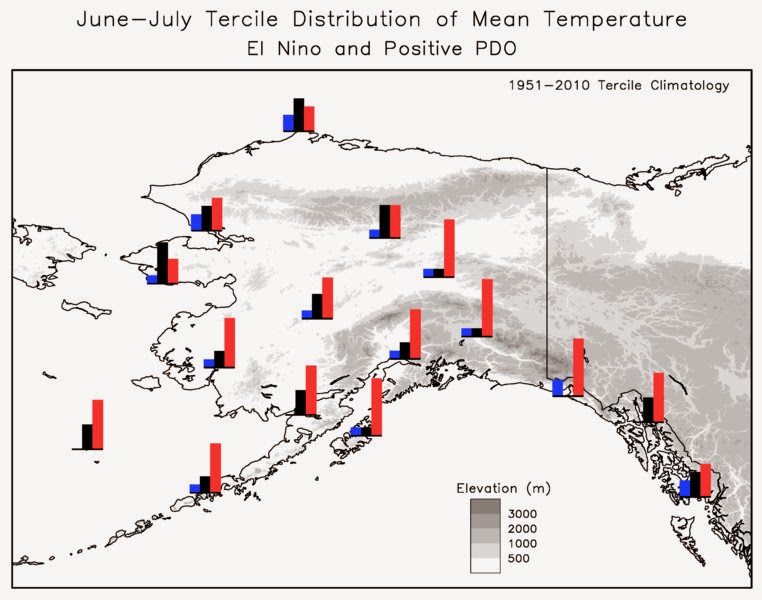 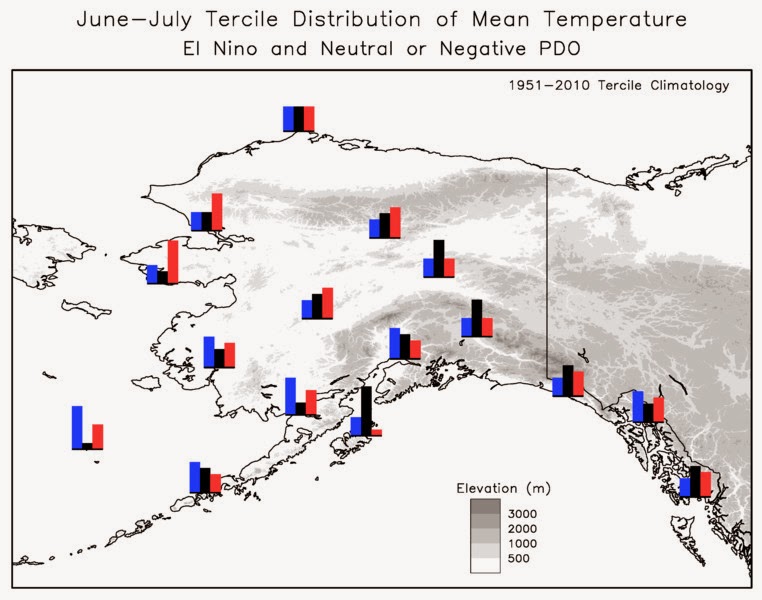 The corresponding precipitation maps are shown below; the dry signal is strong from the west coast to Fairbanks and Anchorage in the El Niño - positive PDO years, but a less positive PDO phase creates a more variable pattern. 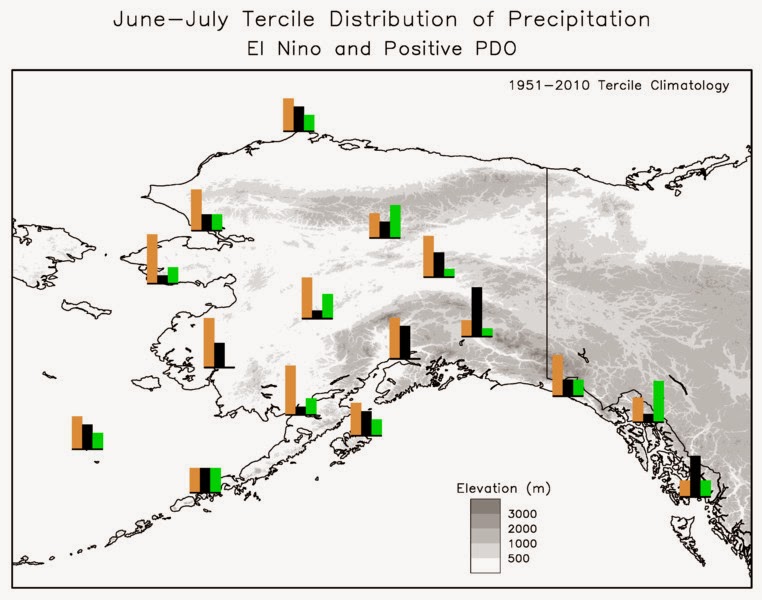 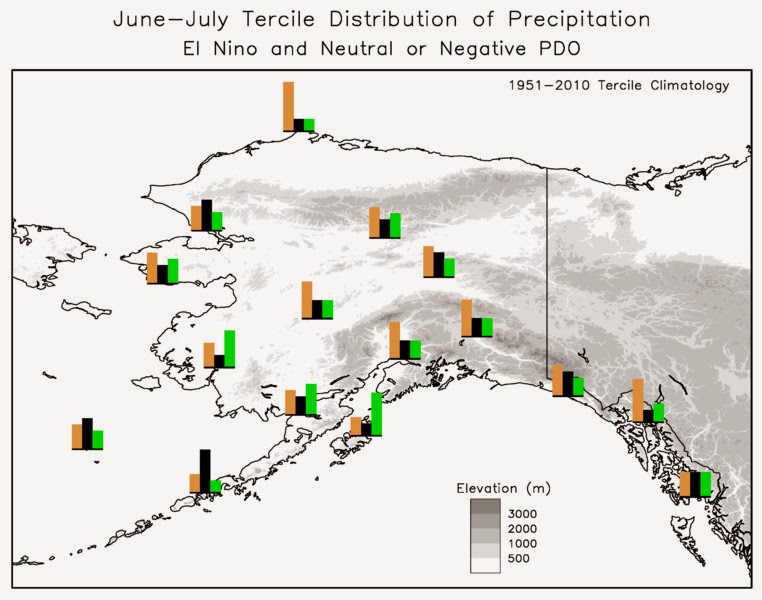 These results suggest that the PDO phase is more important than ENSO for summer temperatures over Alaska, because the El Niño signal is largely removed when the PDO is neutral or negative.  The maps below, derived from the top 10 positive PDO summers, confirm that the PDO temperature signal is stronger than the El Niño temperature signal, when taken in isolation.  Thus a strongly positive PDO phase is more reliably connected to summer warmth than El Niño, and the Fairbanks summer is also more likely to be dry in positive PDO years. 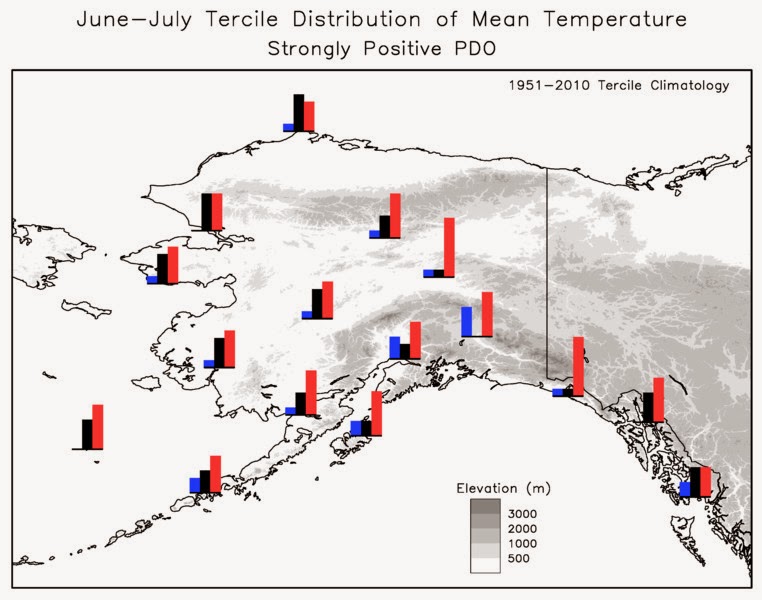 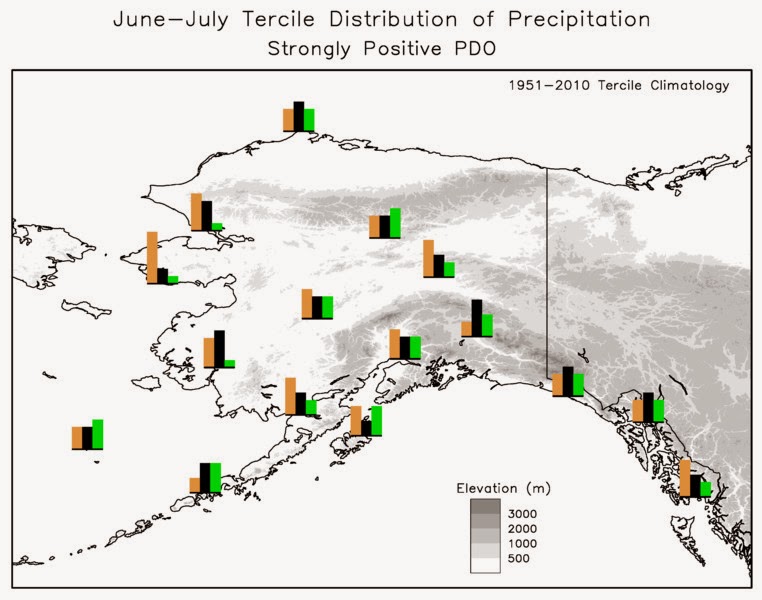 What does all this mean for summer 2014?  Well, the El Niño part is just speculation, because El Niño hasn't even developed yet, let alone a strong El Niño.  However, the PDO has been significantly positive for several weeks now, as the long-lived pool of warm water in the North Pacific has moved closer to the west coast of North America.  If this pattern persists, which seems quite likely, then the positive PDO signal will come into play and another warm summer will indeed be on the cards.
Posted by Richard James at 6:04 PM