First, an update on temperatures: the first 0°F observations this season occurred today at the usual cold spot of Chicken and also at the Chalkyitsik RAWS.  Remarkably, the latter site had measured +1°F each of the 3 previous nights.  Circle Hot Springs has been to 3°F and the Salcha RAWS made it to 4°F today.  There was a bit of ice running on the Yukon River at Dawson, Yukon Territory, today, where the temperature has been struggling to get above freezing in recent days, even under clear skies. 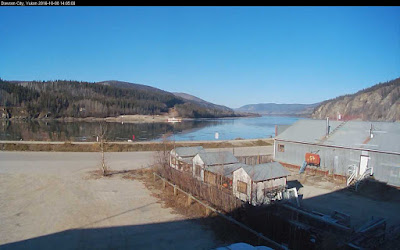 We're approaching the date on the calendar when climatological normal temperatures drop most rapidly in interior Alaska; this occurs around October 24 in Fairbanks, at which point daily normal mean temperatures are dropping more than 6°F per week.  Based on published normals, the station with the most rapid drop is Woodsmoke (7°F per week), as noted in this post from 3 years ago: 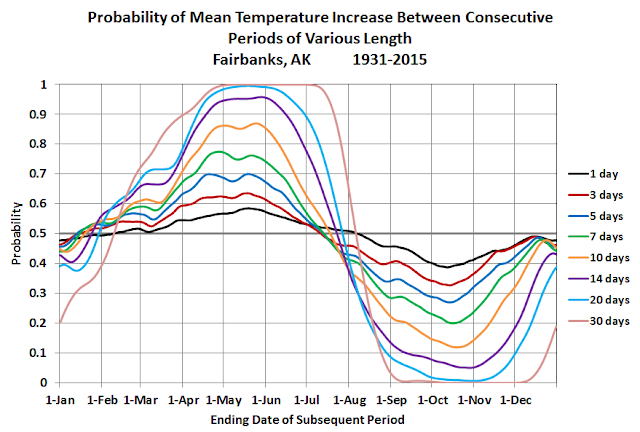 An unrelated but surprising detail on the chart is that the series for consecutive single days (black line) doesn't drop below zero until early August: so even in late July, each day is more than 50% likely to be warmer than the previous day.  This is inconsistent with the 1981-2010 normals, which show the climatological peak of daily mean temperature on July 3 in Fairbanks.  More surprising still is that the other series don't show the same thing, so for example 10 day periods ending in late July are considerably more likely to be cooler than the one before.  I suspect the anomaly for single days has to do with some skewness in the temperature distribution, but a bit more investigation would be needed to clarify this.
Posted by Richard James at 6:07 PM