Strong winds have been blowing in Fairbanks since yesterday morning, as high pressure to the north is creating an intense pressure gradient across the state.  The strong easterly flow has imported the season's first decently cold air mass, with 850mb temperatures dropping to -14°C above Fairbanks by yesterday afternoon.  Saturday morning's balloon sounding revealed the first entirely sub-freezing temperature profile of the season in Fairbanks, and this is much later than usual - the normal date for this event is September 28, and the record latest was in 1969 (October 20).  Fairbanks also recorded its first sub-freezing calendar day yesterday, with a high of 28° F - but no doubt it felt a good deal colder than that.

The graphics below show the sea-level pressure analysis (top) and 500mb height analysis (bottom) from 3pm AKST yesterday afternoon, courtesy of Environment Canada.  The development of an upper-level high pressure system over Chukotka is consistent with the high-latitude blocking patterns and negative Arctic Oscillation that have been observed so far this month. 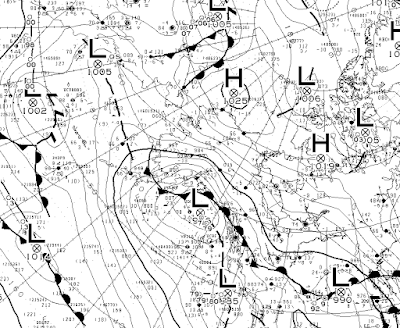 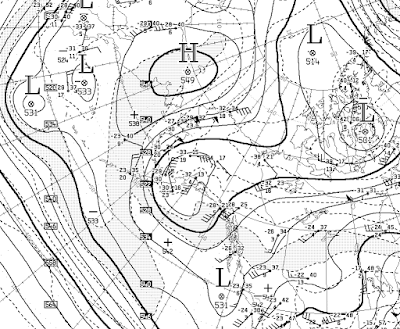 Here's a surface weather display from about the same time.

Webcam images from Ester Dome yesterday showed an abundance of blowing dust in the Tanana River valley as a result of the strong winds.  The simple animation below shows the period when winds began to gust over 20 knots (23 mph) at Fairbanks airport; blowing dust was reported at the airport for several hours.

Sustained winds of 20 knots are quite unusual in Fairbanks at this time of year, as the following chart demonstrates.  In the nearly 20 years since the ASOS platform began reporting at Fairbanks airport, there have been only 2 other occasions with 20+ knot winds in the month of October, and September and November have seen zero and 1 such event respectively.  Winds like this are more commonly observed in late winter and spring. 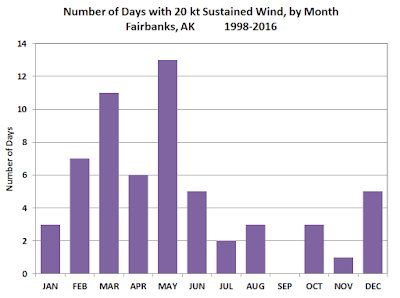 In terms of wind direction, however, the current event (northeasterly winds) is much more typical in Fairbanks; the chart below shows that nearly all wind events of this magnitude are directed either from the northeast or from west to just south of west.  However, the easterly component is rarely observed in summer: since 1998, all of the June-September strong wind events have come from the western half of the compass (and one from the north). 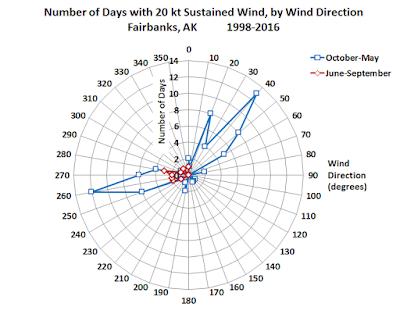 Posted by Richard James at 1:06 PM