Hi, Rick T. here with a post on the frequency of heavy snowfall in Fairbanks, specifically the return period (or, as I prefer, the annual probability) of snowfall amounts. You're perhaps familiar with this concept as applied to rainfall or river flows, and is an important factor to be considering in many engineering applications. We don't see so much of this kind of analysis with regard to snow, though we should, e.g. the maximum expected snow load during the lifetime of a building is (or ought to be) an important design criteria in snow county.

To illustrate, I'll go through the procedure with the two-day snowfall.  For each snow season since 1919-20, we find the max snowfall total on consecutive calendar days.  This gives us an "extreme values" time series. This seasonal maximum has ranged from 2.6" in 1952-53 to 26.9" in 1965-66. Now note that this maximum two-day total can occur at any point in the season, though realistically, late September to May. While the highest value typically occurs in the November to January time frame, it can be much earlier or later. For instance, in 2015-16, the highest two-day total was 13.5" September 29-30, while in 1991-92, the highest two-day total of 9.6" occurred in mid-May. So putting this in graphical form, on the left is the annual time series. It is clear just from inspection that there is no temporal trend, which  simplifies the analysis. On the right is a histogram of those annual values. For many cold seasons, the highest two-day snow total is in the range of 5-9", but with a moderately long tail toward higher values.

Now we'll fit the data to a generalized extreme value distribution, and I plot the results as a function of return period, as in the graphic below. The observed seasonal maximum in this plot are rank ordered, the green line gives the best fit and the dashed lines are confidence intervals of the fit. 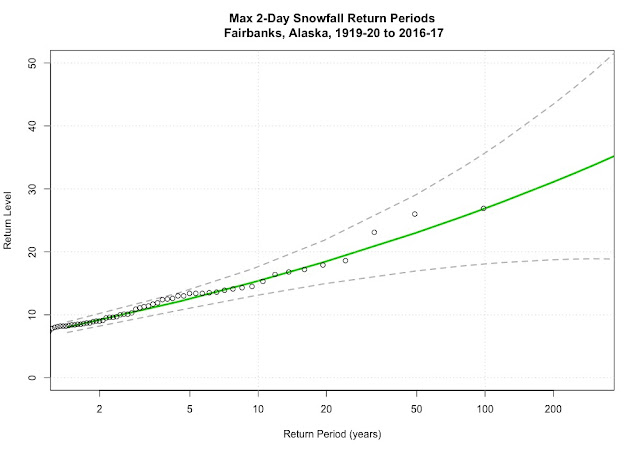 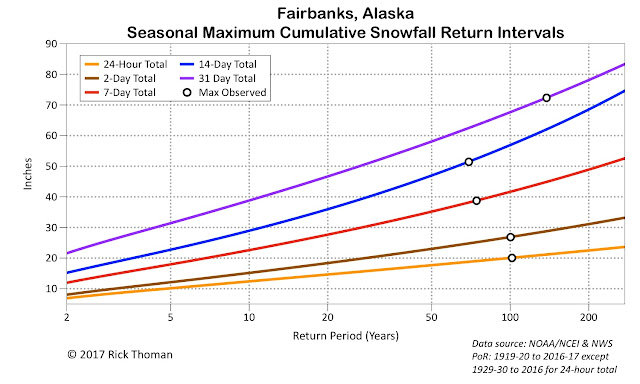 For reference I've plotted the highest observed value in the past 97 winters. These are used in the fit and so are not independent, but this does give an idea of the (relative) rarity. So both the 7 and 14-day totals are a bit lower than the fitted 100-year return period, while 72.4" that fell in the 31 days ending January 25, 1937 is more unusual. A word of caution: the 24 hour return periods are only for the Weather Bureau/NWS era (since winter 1929-30) and, since c. 2001 there are no six hour snowfall observations. The only 24 hour snowfall totals currently available are the midnight to midnight, calendar day total and the 3pm-3pm AKST totals (which can be back-calculated from the end-of-day and 3pm AKST climate summary products). The 3pm-3pm totals are not regularly used by NCEI, so for the high end snowfalls since 2009 I've checked them myself. The only difference from the published values (which are maximum calendar day values) is for 2016-17, when the highest calendar day total is 10.4" (Dec 28) but the highest 3pm-3pm total is 12.4" (Dec 28-29).