Last night was colder, especially in the Fortymile Country, with -35 to -38°F in several locations and a rather remarkable -43°F at Chicken.  Far to the north, satellite estimates suggest it may have been below -45°F in Arctic Village and its environs, but unfortunately the Arctic Village AWOS has not been reporting lately.

Distinctly chilly conditions have descended upon Fairbanks and indeed most of the eastern interior, with widespread -20s and some -30s Fahrenheit this morning.  Here are some of the coldest spots, with higher-elevation valley sites and the Fortymile Country being well represented: 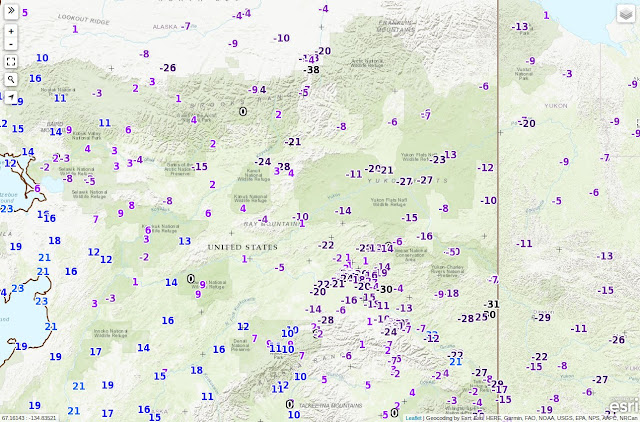 In Fairbanks the international airport reached -23°F, the Goldstream Creek co-op saw -22°F, and Eielson AFB reached -20°F, but North Pole only hit -18°F.  It's quite unusual for the airport to be the coldest spot in the area.  Tonight looks to be colder as the 5-minute observations from Fairbanks airport showed a 10°F temperature drop right after sunset just a short while ago - see below (sunset was at 15:34 AKST today): 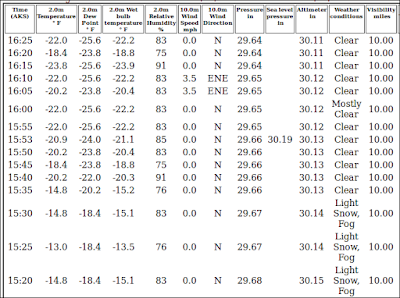 Here's the 500mb map (courtesy of Environment Canada) from 3am this morning.  Cold air is being imported from the north in the strong pressure gradient between the Pacific/Bering Sea ridge and the cold low over Canada's Melville Island.  The cold low is really cold - notice the -40s Celsius temperatures around it.  As for the Bering Sea ridge, this has been a persistent feature of the pattern in recent weeks and is a clear expression of a La Niña influence.  I'll have more to say about this in a subsequent post. 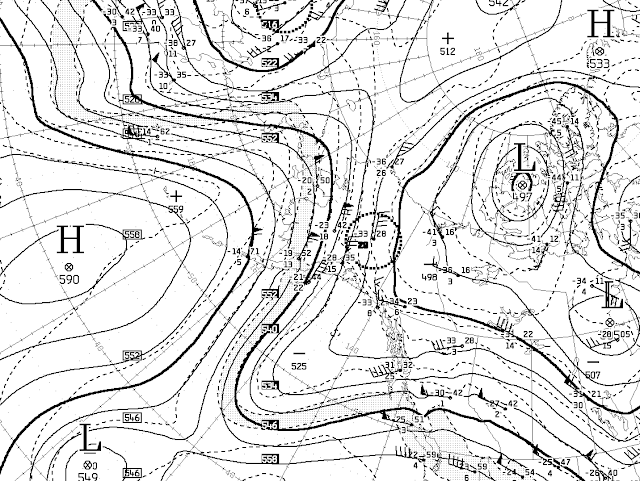